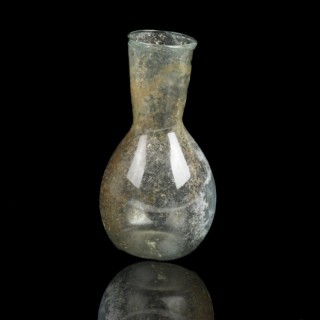 An ancient Roman bottle in light green clear glass and displaying a section of silvery rainbow iridescence. The bottle consists of a narrow concave base, an ovoid body, and a short, wide neck that expands slightly to it asymmetrical rolled rim. The word iridescence comes from Iris, the Greek goddess of rainbows and refers to rainbow-like colours seen on glass. It is caused by alkali being leached from the glass by acidic water and then forming fine layers that eventually separate slightly or flake off, causing a prism effect on light bouncing off and passing through the surface which reflects light differently, resulting in a rainbow-like appearance such as the one on this flask. This piece has the colour of ancient glass in its natural state – bluish green that resulted from the iron oxide present in the silica or the sand.

Very fine, intact, with earthy encrustations over the whole