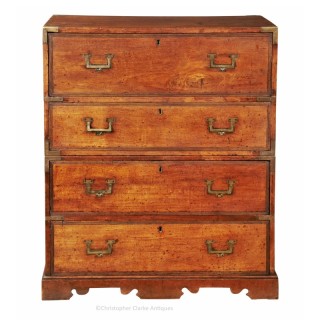 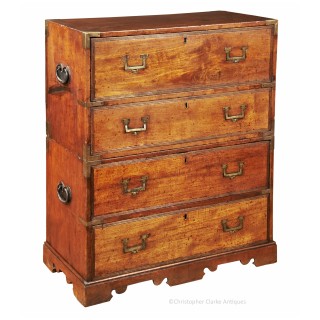 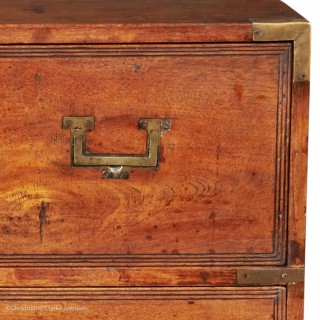 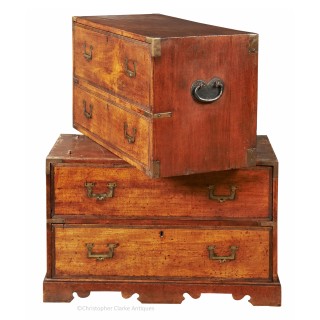 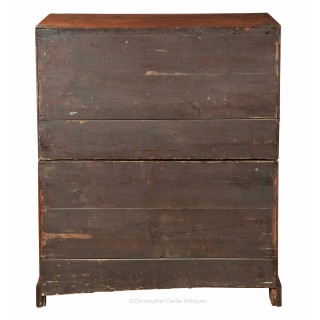 The chest sits on a fixed plinth base with a decorative shaped bracket foot. Most such chests have a plain bracket foot so the extra detail to this example makes it stand out a little. One ear to the front has been knocked off and replaced.

The drawers have a reeded moulding cut into their outside edges and have flush brass skeletal handles. All the drawer linings are made of teak, as you expect, except the top drawer. The top drawer has pine linings which are historic replacements. This, along with the replaced backboards, scar to one side and the long patch to the back edge on the same side suggest that at some stage the chest has taken a ‘fall’ during travel. They don’t distract from your first impression of the chest but perhaps are indicative of its use by an officer travelling in India.

The carrying handles to the side are made of iron and have a shaped back plate often seen on the better Anglo Indian chests. The brass corners and straps are made from sheet brass.

The small size to this type of campaign chest makes it very popular. Early to mid 19th Century.

Top drawer linings & backboards historic replacements. Patch to back edge on one side and ‘scar to wood below handle.