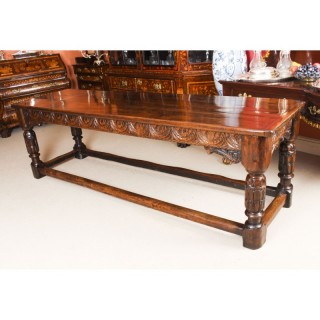 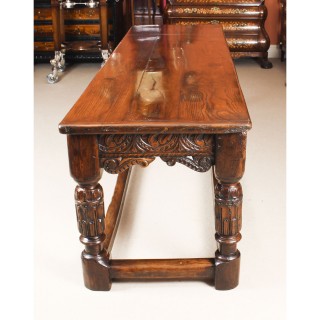 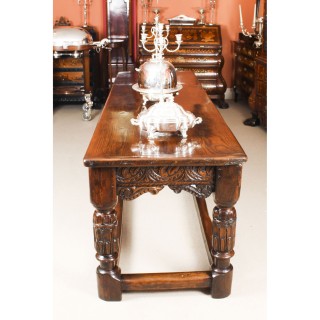 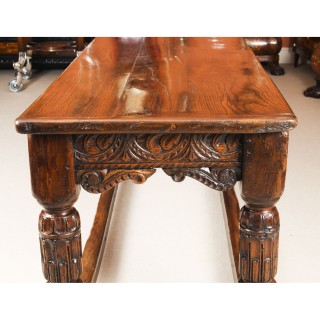 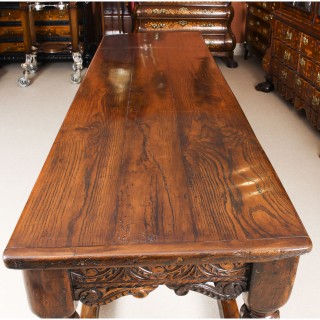 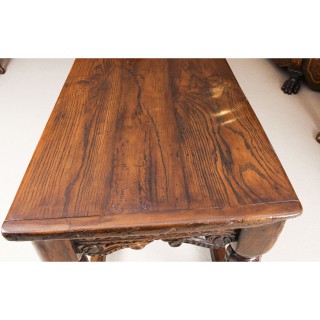 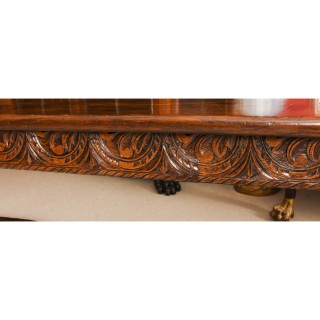 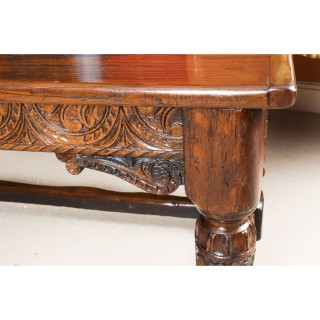 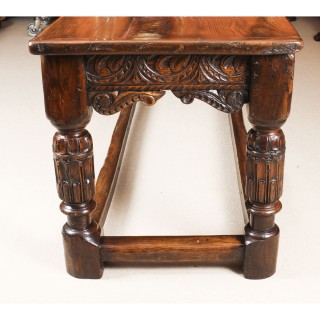 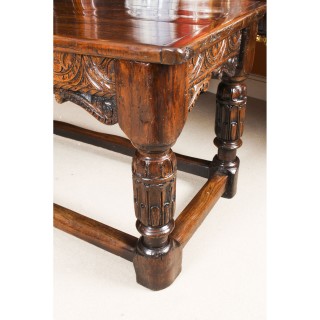 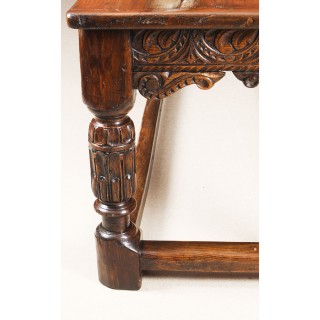 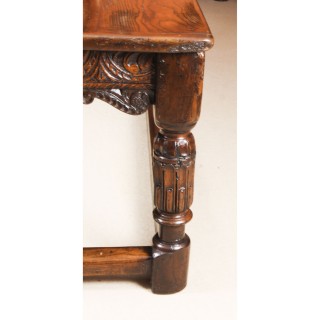 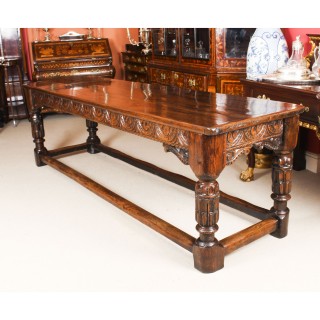 A large rare and fine 8ft 6″ antique English Jacobean oak refectory table, late 17th Century in date.
This wonderful and decorative table features a thick plank top with dowelled tenons and a beautiful chip carved decorated frieze to all sides. It is raised on turned and carved bulbous legs on wedge-shaped feet united by flat stretchers.

A rare survivor, the top reputably made from ship timbers, it will stand out in your home and will definitely become a key piece in your furnishing collection.

Condition:
In goodcondition. As antique items, the piece shows signs of use commensurate with age, these minor condition issues are mentioned for accuracy and, as seen in the accompanying photographs, the table displays beautifully.

Jacobean Furniture
This is the England that James I came into in 1603: English culture was growing, the educated class was increasing, and more people had the wealth to invest in furniture. Jacobean furniture continued along the path started under Elizabeth; it was more influenced by Renaissance ideas and moved further from England’s medieval traditions.
Jacobean furniture was often geometric and symmetrical, with a strong influence on rectilinear shapes and lines. It was straightforward in design but decorated with carvings of Classical or intricate geometric motifs. It was more complex than previous furniture, and for the first time furniture makers began consistently treating their pieces like three-dimensional objects that would be seen from all sides. Due to the bulkiness and weight of medieval furniture, English furniture objects were made to only be seen from one direction. Jacobean furniture was still heavy compared to later styles, but was now light and mobile enough that designers had to pay attention to details and ornamentation from every visible angle.

One of the biggest signs that English furniture was shifting away from its medieval roots was a new focus on comfort. Comfort was not a definitive aspect of medieval furniture, but Jacobean styles included new types of chairs designed with comfort for different circumstances. There were even chairs made specifically to accommodate the wider, hoop-style dresses of court ladies who needed a comfortable way to recline. It should be no surprise to learn that this was also the first era in which upholstery really appeared in English furniture.

This was the era when the English Empire really took off. It established colonies in Jamestown and Plymouth and opened trade routes in West Asia, Russia, the Caribbean, and the Indian Ocean. Jacobean furniture reflected this more globally-active England, utilizing foreign materials like mother-of-pearl for decoration, and even painting many furniture pieces black in emulation of East Asian lacquer.