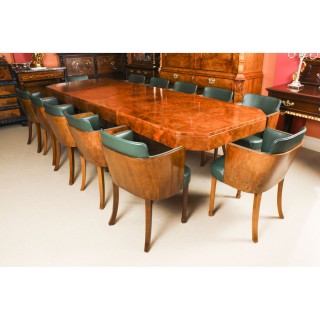 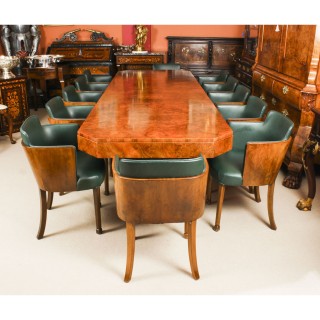 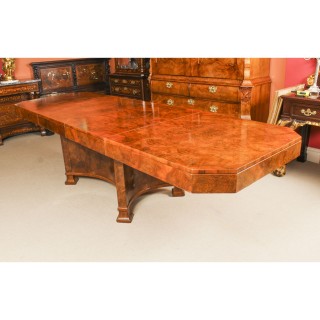 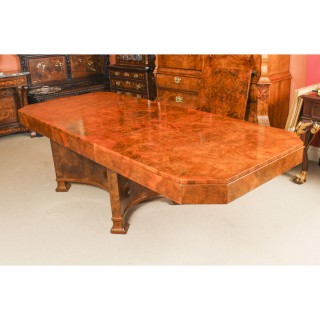 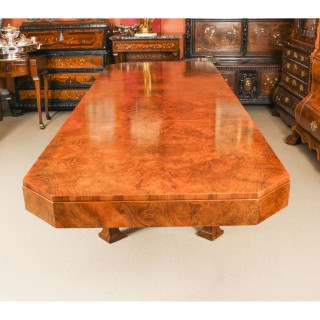 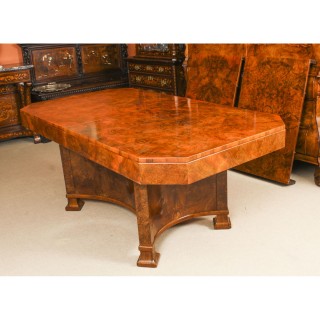 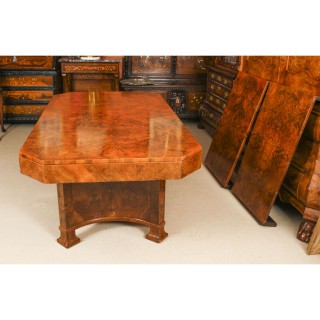 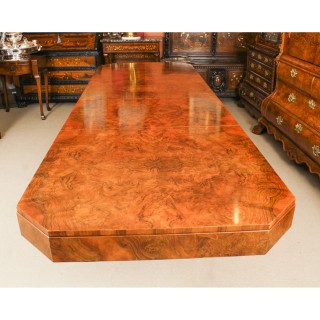 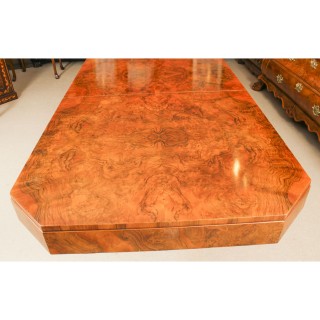 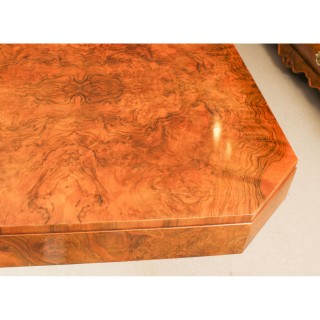 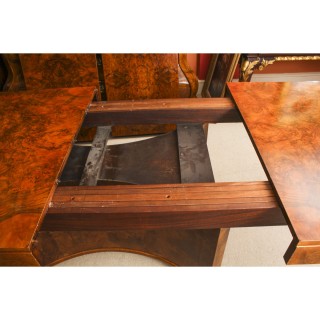 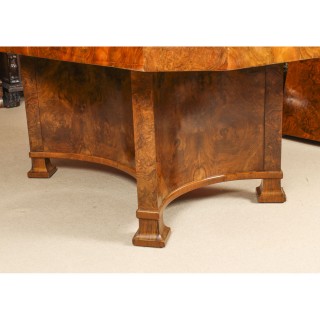 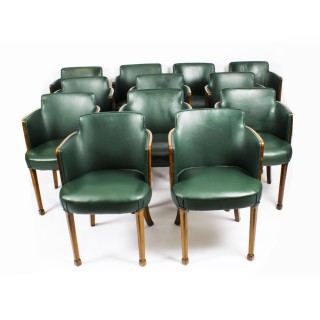 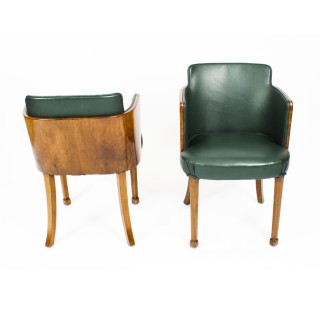 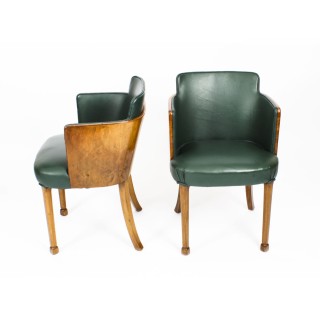 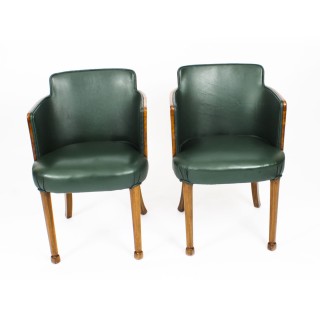 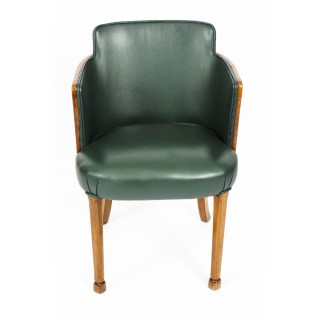 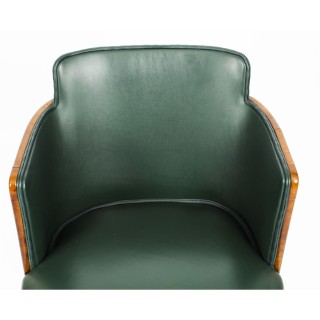 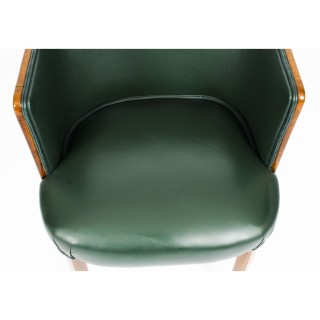 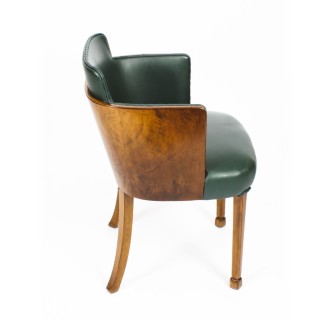 The stunning rectagular top with canted corners has has been hand-crafted from burr walnut, which has a beautiful figured grain, and French polished. It has two large leaves which can be added or removed as required to suit the occasion and stored away when not required.

The table is raised on a masterfully hand carved central shaped quadriform base with outset block feet.

The twelve armchairs have an equally gorgeous design and are also slightly unusual, with curved shell backs. They are also beautifully finished in burr walnut and have green leather upholstery.

Whatever the function of this gorgeous set, it will make a profound impression on your dinner guests and will receive the maximum amount of attention wherever it is placed.

It is very rare to find a large Art Deco dining table with the original set of twelve armchairs, as tables in the Deco period were normally made to seat six or rarely eight, so twelve is unheard of.

The Hille furniture company was started in the East End of London in 1906 by Salamon Hille, a Russian emigrant, to renovate and reproduce eighteenth century furniture.

The focus of the business was very much quality rather than large volumes, employing skilled craftsmen and gaining customers such as Hamptons, a well known furniture store, amongst others.

By the 1930’s the company had established an international reputation supplying products all over the world. Salamon’s daughter, Ray, subsequently joined and worked with the company to produce furniture to original designs. In 1932, Salamon retired and Ray took over the the business with Hille becoming a Limited company that year under her leadership.

In 1940 tragedy struck as Salamon Hille died, followed by the destruction of the North London home, factory and stores. The war had already been a challenge with reduced numbers of commissions and a restriction on timber to furniture makers. Under Ray Hille’s leadership Hille were recommended by the curator of the Victoria & Albert Museum to the City Guildhalls to repair bomb damaged furniture, collecting it in a hired van. With new timber being unobtainable, old furniture was sourced and the wood used and re-worked. Old employees came back from the war and in 1945 the business moved to Lea Bridge Road, Leytonstone, and Ray Hille was re-joined by husband Maurice, daughter Rosamind, son-in-law Leslie Julius and then later by Leslie’s army colleague John Collier.

Due to the restrictions in the UK, quality furniture could only be made for overseas customers so Hille’s only option was to focus on export markets. Following visits to the US Hille built up a suitable customer base. Export was to become a permanent feature for Hille from then on.

In 1950 Hille moved to premises in Hainault but almost immediately the 1951 financial crisis hit resulting in the factory having to move to an old brewery in Watford. The company recovered and in 1961 Hille opened its new offices designed by Hungarian-born modernist architect Ernö Goldfinger who was best known for designing the Elephant and Castle development.

1961 also saw Ray Hille’s second daughter Cherill Scheer joining Hille, adding a new generation to Hille’s management. Her work drove Hille’s marketing, most notably the promotion of the original Polyside chair in 1963, sending out a line drawing of a stork to major government buyers, architects and designers alerting them to the following first samples of the polyside chair with some 600 units then sent out – a marketing campaign which subsequently led to the sale of millions of units in the years that followed. The company is still in operation today.

Walnut is a hard, dense, tight- grained wood that polishes to a very smooth finish. It is a popular and attractive wood whose colour ranges from near white in the sapwood to a dark hew in the heartwood. When dried in a kiln, walnut wood tends to develop a dull brown colour, but when air-dried can become a rich purplish-brown. Because of its colour, hardness and grain, it is a prized furniture and carving wood. Walnut veneer was highly priced and the cost would reflect the ‘fanciness’ of the veneer – the more decorative, then the more expensive and desirable.