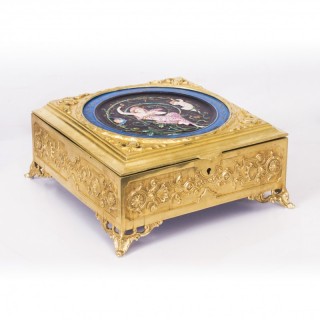 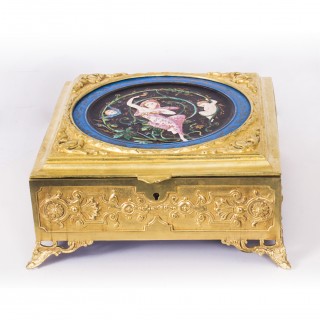 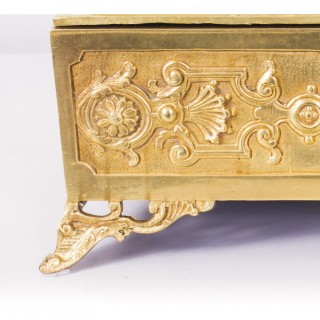 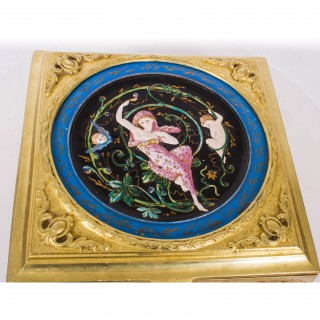 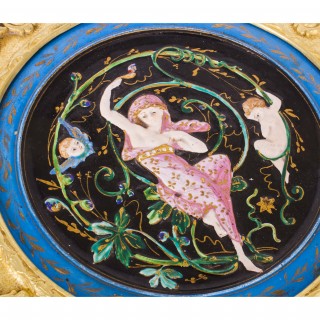 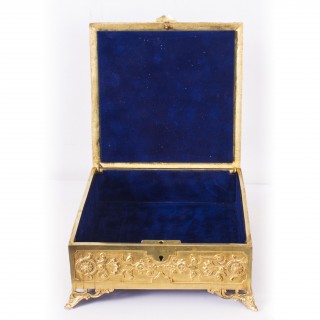 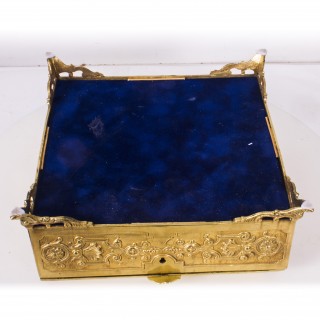 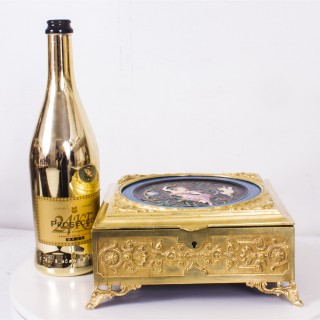 This is an absolutely fabulous antique English Art Nouveau Ormolu and Minton Porcelain casket, Circa 1890 in date.

The top is inset with a superb hand painted rectangular porcelain plaque with cherubs and a maiden decorated in relief. The ormolu is applied with a wonderful foliate and floral decoration of curved lines.

The interior is lined with stunning blue velvet and the casket is raised on four elegant cabriole feet.

Condition:
In excellent condition, the porcelain and ormolu having been delicately cleaned in our workshops, please see photos for confirmation.

Art Nouveau had its roots in Britain, in the arts and crafts movement of the 1880s, which called for a closer union between the fine arts and decorative arts, and a break away from historical styles to designs inspired by function and nature. One notable early example Arthur Mackmurdo’s design for the cover of his essay on the city churches of Sir Christopher Wren, published in 1883.

Other important innovators in Britain included the graphic designers Aubrey Beardsley whose drawings featured the curved lines which became the most recognizable feature of the style. free-flowing wrought iron from the 1880s could also be adduced, or some flat floral textile designs, most of which owed some impetus to patterns of 19th century design. Other British graphic artists who had an important place in the style included Walter Crane and Charles Ashbee.

The Liberty department store in London played an important role, through its colourful stylized floral designs for textiles, and the silver, pewter, and jewellery designs of Manxman (of Scottish descent) Archibald Knox. His jewellery designs in materials and forms broke away entirely from the historical traditions of jewellery design.
For Art Nouveau architecture and furniture design, the most important centre in Britain was Glasgow, with the creations of Charles Rennie Mackintosh and the Glasgow School, whose work was inspired by the French Art Nouveau, Japanese art, symbolism and Gothic revival. Beginning in 1895, Mackintosh displayed his designs at international expositions in London, Vienna, and Turin; his designs particularly influenced the Secession Style in Vienna. His architectural creations included the Glasgow Herald Building (1894) and the library of the Glasgow School of Art (1897). He also established a major reputation as a furniture designer and decorator, working closely with his wife, Margaret Macdonald Mackintosh, a prominent painter and designer. Together they created striking designs which combined geometric straight lines with gently curving floral decoration, particularly a famous symbol of the style, the Glasgow Rose”.

Léon-Victor Solon, made an important contribution to Art Nouveau ceramics as art director at Mintons. He specialised in plaques and in tube-lined vases marketed as “secessionist ware” (usually described as named after the Viennese art movement). Apart from ceramics, he designed textiles for the Leek silk industry and doublures for a bookbinder (G.T.Bagguley of Newcastle under Lyme), who patented the Sutherland binding in 1895.

The Edward Everard building in Bristol, built during 1900–01 to house the printing works of Edward Everard, features an Art Nouveau façade. The figures depicted are of Johannes Gutenberg and William Morris, both eminent in the field of printing. A winged figure symbolises the “Spirit of Light”, while a figure holding a lamp and mirror symbolises light and truth.

Ormolu – (from French ‘or moulu’, signifying ground or pounded gold) is an 18th-century English term for applying finely ground, high-carat gold in a mercury amalgam to an object of bronze.The mercury is driven off in a kiln leaving behind a gold-coloured veneer known as ‘gilt bronze’.
The manufacture of true ormolu employs a process known as mercury-gilding or fire-gilding, in which a solution of nitrate of mercury is applied to a piece of copper, brass, or bronze, followed by the application of an amalgam of gold and mercury. The item was then exposed to extreme heat until the mercury burned off and the gold remained, adhered to the metal object.