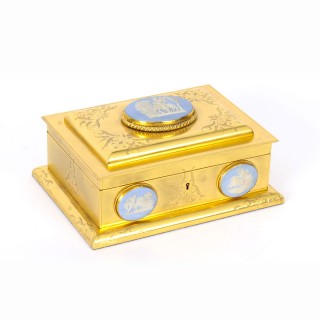 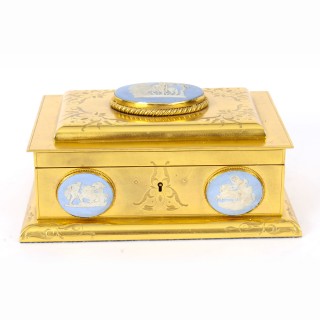 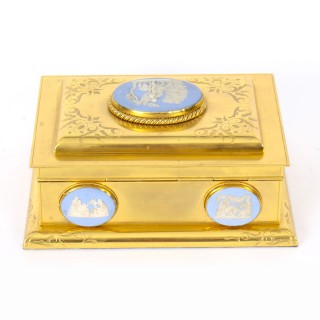 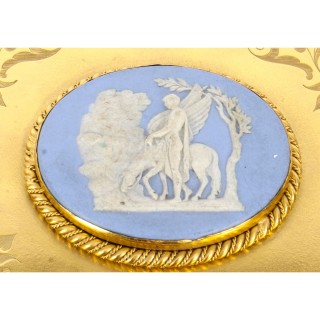 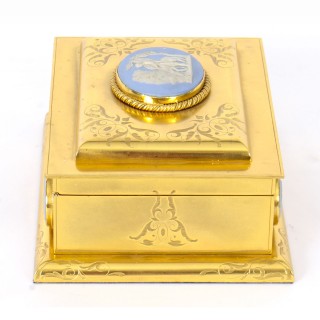 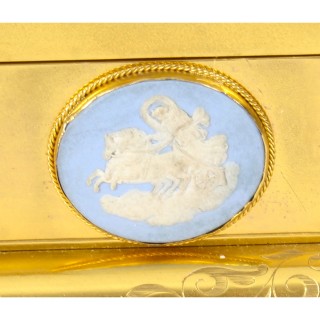 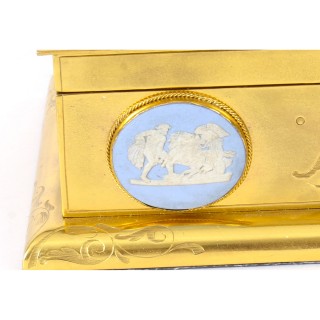 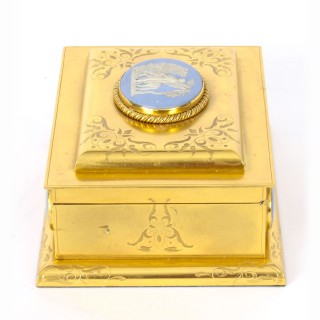 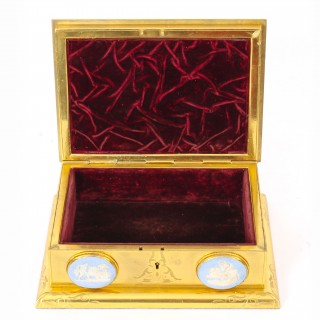 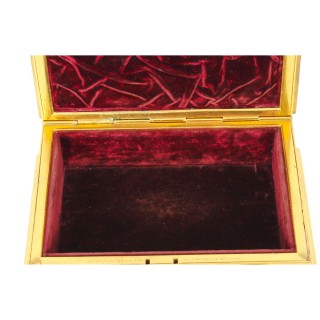 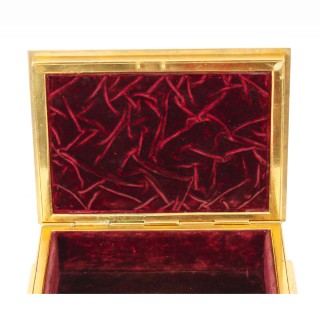 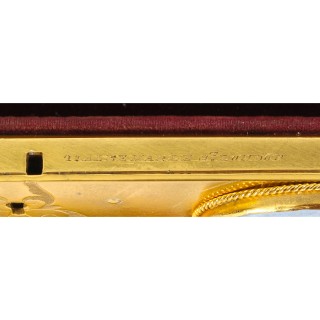 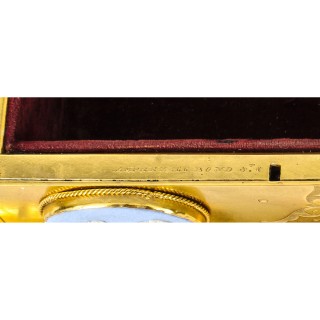 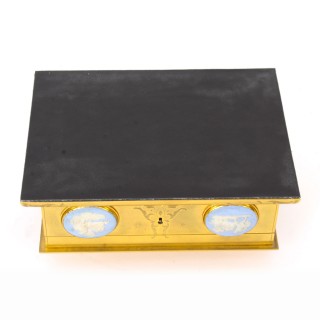 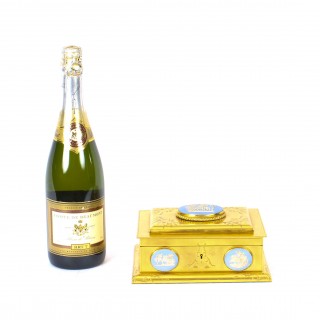 This is a truly magnificent antique Victorian ormolu luxury casket by Asprey London, circa 1870 in date.

This exceptional casket is rectangular in shape and features sumptuous applied jasperware plaques of oval shape – four plaques are positioned on the body of the casket and one bigger plaque is housed on the top. These five resplendent portrait medallions feature stunning white Neoclassical-style figures against a vibrant blue background, giving a beautiful cameo effect which is distinctive of this special type of pottery.

The sturdy hinged lid opens to reveal an elegant interior lined with the original red velvet and ready to store all your precious items.

The lid and the body have opulent engraved decoration in the form of ornate leaves, which add a further touch of refinement to this already sophisticated casket.

It is an impressive casket which apart from its functionality is also a highly attractive and valuable item.

Asprey was established in England in 1781 and founded as a silk printing business by William Asprey, it soon became a luxury emporium. In 1841, William Asprey’s elder son Charles went into partnership with a stationer located on London’s Bond Street. In 1847 the family broke with this partner and moved into 167 New Bond Street, the premises Asprey occupies today.

From its central London location Asprey advertised ‘articles of exclusive design and high quality, whether for personal adornment or personal accompaniment and to endow with richness and beauty the table and homes of people of refinement and discernment.’ An early speciality was dressing cases. Asprey crafted traditional cases and designs, mostly in leather, suitable for the new style of travel ushered in by railways. The main competitors at the time were H.J. Cave & Sons. Asprey was recognised for its expertise when it won a gold medal for its dressing cases at the International Exhibition of 1862 but lost out to its rivals, H.J. Cave & Sons in 1867.

The company consolidated its position through acquisitions. In 1859 Asprey absorbed Edwards, an award winning maker of dressing cases and holder of a Royal Warrant. The company also purchased the Alfred Club at 22 Albemarle Street, which backed on to the New Bond Street store and meant that Asprey now had entrances on two of London’s most fashionable streets.

In 1862, Asprey was granted a Royal Warrant by Queen Victoria. The Prince of Wales, later to be crowned Edward VII, granted another Royal Warrant. In 1953, for the coronation of Elizabeth II, Asprey paid homage with the Asprey Coronation Year Gold Collection, which featured a dessert, coffee and liqueur service in 18-carat gold and weighed almost 27 pounds. In April 1953, it went on show in the New Bond Street store and subsequently toured the United States.

As the business grew, the company acquired manufacturing facilities and hired silversmiths, goldsmiths, jewellers and watchmakers including Ernest Betjeman, the father of the distinguished poet John Betjeman, one of the most highly regarded craftsman and designers of his day.

In the twenties, commissions poured in from around the world, from American millionaire J. Pierpont Morgan to potentates such as the Maharaja of Patiala, who commissioned a huge teak travelling trunk for each of his wives in which each trunk was fitted with solid silver washing and bathing utensils with waterspouts of ornate tiger head and lined with blue velvet. Asprey cigarette cases became collectable amongst young sophisticates who delighted in its other modern products, including travel clocks, safety razors and automatic pencil sharpeners.

Jasperware, or jasper ware, is a type of pottery first developed by Josiah Wedgwood in the 1770s. Usually described as stoneware, it has an unglazed matte “biscuit” finish and is produced in several different colours, of which the most common and best known is a pale blue that has become known as Wedgwood Blue. Relief decorations in contrasting colours (typically in white but also in other colours) are characteristic of jasperware, giving a cameo effect. The reliefs are produced in moulds and applied to the ware as sprigs.

After several years of experiments, Wedgwood began to sell jasperware in the late 1770s, at first as small objects, but from the 1780s adding large vases. It was extremely popular, and after a few years, many other potters devised their own versions. Wedgwood continued to make it into the 21st century. The decoration was initially in the fashionable Neoclassical style, which was often used in the following centuries, but it could be made to suit other styles. Wedgwood turned to leading artists outside the usual world of Staffordshire pottery for designs. High-quality portraits, mostly in profile, of leading personalities of the day were a popular type of object, matching the fashion for paper-cut silhouettes. The wares have been made into a great variety of decorative objects, but not typically as tableware or teaware. Three-dimensional figures are normally found only as part of a larger piece, and are typically in white. Teawares are usually glazed on the inside.