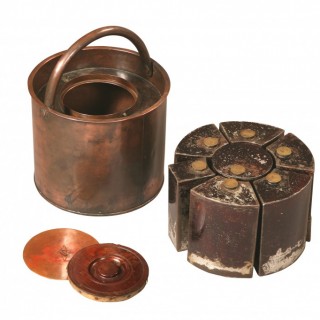 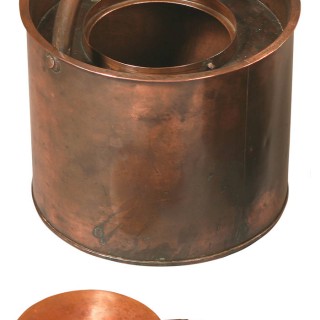 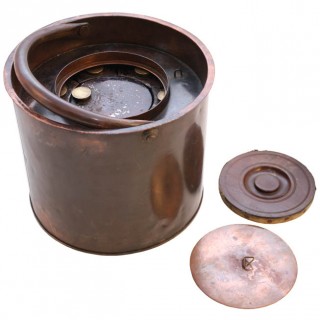 The purpose of using copper to make this Black Powder Drum is to minimize the danger from sparks that might be created if steel was used. It has 2 lids; a turned mahogany one and a copper plate that it sits on top of to cover the hatch opening. It is probable that it had a further copper cap lid and there remains a ring for its fixing. The number of lids emphasizes the need to protect the contents from coming into contact with fire. The interior is fitted with 7 japanned tin canisters with brass screw tops. They are all wedge shaped except the central circular one and the first one to be removed after that. If it was not smaller in size and rectangular, it would be impossible to remove or fit the canisters into the drum. This is the only one to also have a folding handle to assist in its removal. It is probable that this drum was used at sporting shoots to distribute the powder to the different butts and it has a tubular copper swing handle to carry it. This drum has no maker’s name but James Walker of Wapping patented a very similar can for gunpowder storage in 1810. However, his initial patent was contravened by Sir William Congreve of the Royal Laboratory, who was interested in similar drums for naval use. Although Walker successfully sued the government in 1816 a number of other makers produced similar copper storage tins for powder over the years. Early to mid 19th Century.

1 lid missing. Some wear to paintwork. Restoration to one canister bottom.