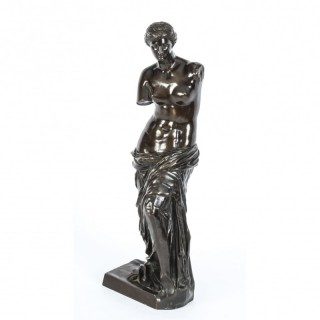 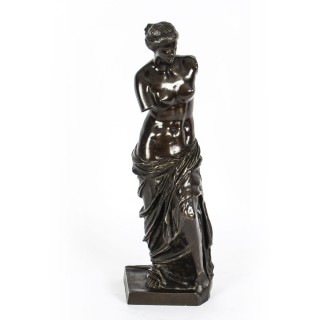 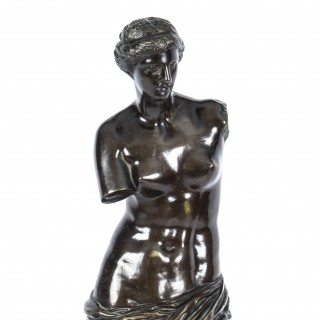 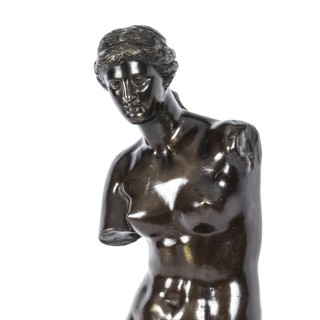 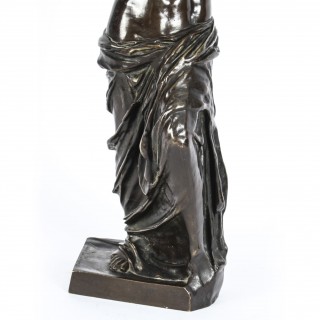 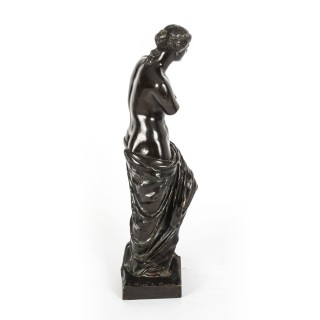 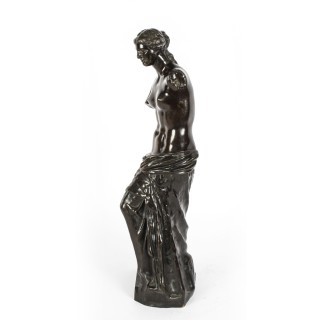 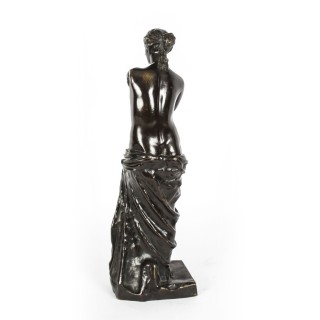 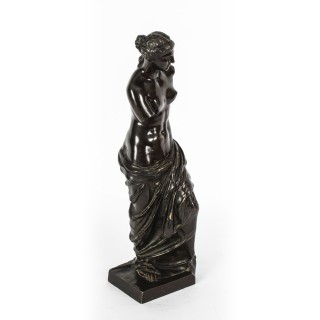 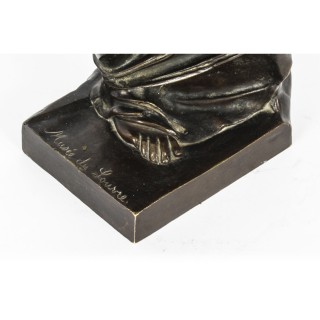 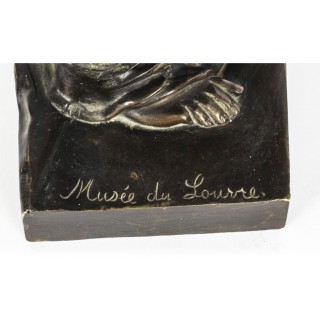 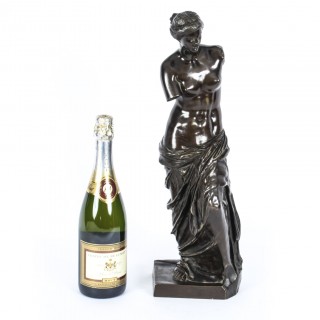 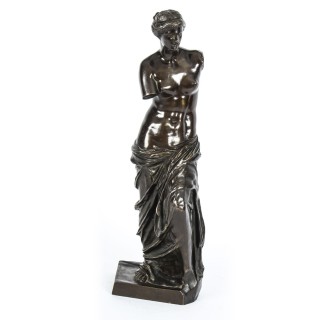 A French antique bronze sculpture of the famous ancient Greek statue, Venus de Milo, circa 1890 in date.
Exactly as in the original sculpture by Alexandros of Antioch, here the Goddess of beauty and love embodies the ideal female form – she is depicted nearly nude with her sinuous shaped body, and she is posed in a classical S-curve displaying her aesthetic charm.

This high-quality sculpture is made from dark brown patinated bronze and is inscribed Musee du Louvre on the base.

The attention to detail throughout the piece is second to none and the figure is extremely lifelike.

The Venus de Milo is an ancient Greek statue and one of the most famous works of ancient Greek sculpture. Initially, it was attributed to the sculptor Praxiteles, but based on an inscription that was on its plinth, the statue is now thought to be the work of Alexandros of Antioch.

Created sometime between 130 and 100 BC, the statue is believed to depict Aphrodite, the Greek goddess of love and beauty. However, some scholars claim it is the sea-goddess Amphitrite, venerated on Milos. It is a marble sculpture, slightly larger than life-size at 203 cm (6 ft 8 in) high. Part of an arm and the original plinth were lost following the statue’s discovery. It is currently on permanent display at the Louvre Museum in Paris. The statue is named after Aphrodite’s Roman name, Venus, and the Greek island of Milos, where it was discovered.

It is generally asserted that the Venus de Milo was discovered on 8 April 1820 by a peasant named Yorgos Kentrotas, inside a buried niche within the ancient city ruins of Milos. Milos is the current village of Trypiti, on the island of Milos (also called Melos, or Milo) in the Aegean, which was then a part of the Ottoman Empire.

Elsewhere, the discoverers are identified as Yorgos Bottonis and his son Antonio. Paul Carus gave the site of discovery as “the ruins of an ancient theater in the vicinity of Castro, the capital of the island”, adding that Bottonis and his son “came accidentally across a small cave, carefully covered with a heavy slab and concealed, which contained a fine marble statue in two pieces, together with several other marble fragments. This happened in February, 1820”. He based these assertions on an article he had read in the Century Magazine.

The Australian historian Edward Duyker, citing a letter written by Louis Brest who was the French consul in Milos in 1820, asserts the discoverer of the statue was Theodoros Kendrotas and that he has been confused with his younger son Giorgios (known phonetically as Yorgos) who later claimed credit for the find. Duyker asserts that Kendrotas was taking stone from a ruined chapel on the edge of his property – terraced land that had once formed part of a Roman gymnasium – and that he discovered an oblong cavity some 1.2 x 1.5 metres deep in the volcanic tuff. It was in this cavity, which had three wings, that Kendrotas first noticed the upper part of the statue.

Notwithstanding these anomalies, the consensus is that the statue was found in two large pieces (the upper torso and the lower draped legs) along with several herms (pillars topped with heads), fragments of the upper left arm and left hand holding an apple, and an inscribed plinth.