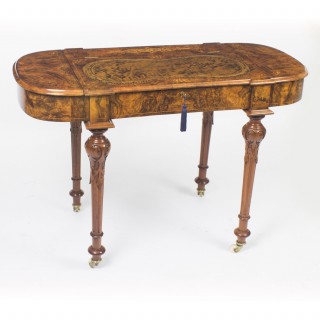 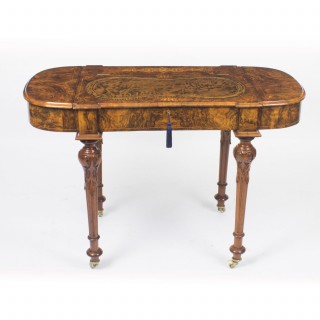 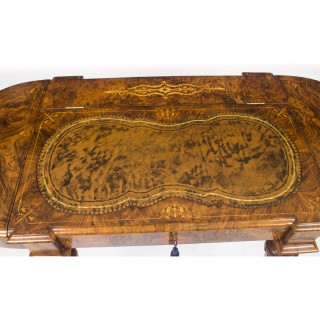 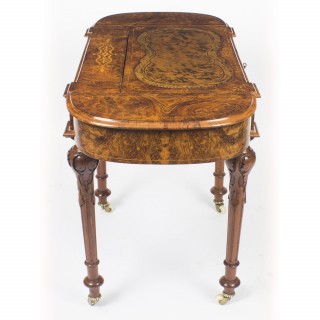 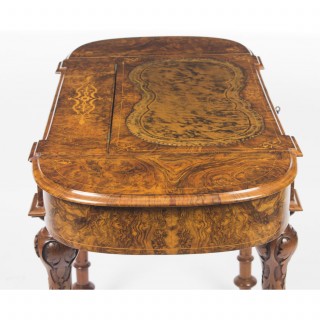 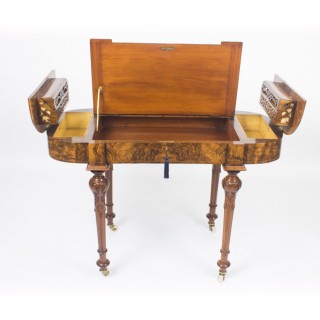 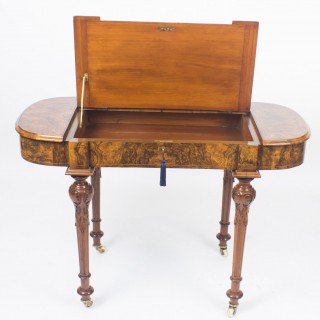 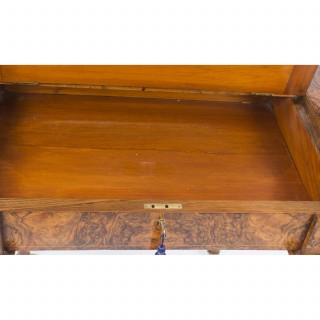 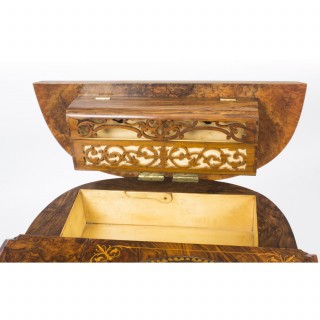 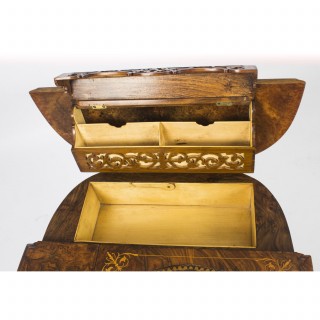 The top features delicate foliate marquetry with a shaped chocolate brown gold tooled leather inset, which lifts up to reveal a large space for storage and is flanked by counter lifting stationery fretwork compartments either side.

The table sits on carved and reeded legs that terminate in their original porcelain and brass castors and is finished on all sides so that it can stand freely in the centre of a room.

Burr Walnut
refers to the swirling figure present in nearly all walnut when cut and polished, and especially in the wood taken from the base of the tree where it joins the roots. However, the true burr is a rare growth on the tree where hundreds of tiny branches have started to grow. Burr walnut produces some of the most complex and beautiful figurings you can find.

The technique of veneered marquetry had its inspiration in 16th century Florence. Marquetry elaborated upon Florentine techniques of inlaying solid marble slabs with designs formed of fitted marbles, jaspers and semi-precious stones. This work, called opere di commessi, has medieval parallels in Central Italian “Cosmati”-work of inlaid marble floors, altars and columns. The technique is known in English as pietra dura, for the “hardstones” used: onyx, jasper, cornelian, lapis lazuli and coloured marbles. In Florence, the Chapel of the Medici at San Lorenzo is completely covered in a coloured marble facing using this demanding jig-sawn technique.

Techniques of wood marquetry were developed in Antwerp and other Flemish centres of luxury cabinet-making during the early 16th century. The craft was imported full-blown to France after the mid-seventeenth century, to create furniture of unprecedented luxury being made at the royal manufactory of the Gobelins, charged with providing furnishings to decorate Versailles and the other royal residences of Louis XIV. Early masters of French marquetry were the Fleming Pierre Golle and his son-in-law, André-Charles Boulle, who founded a dynasty of royal and Parisian cabinet-makers (ébénistes) and gave his name to a technique of marquetry employing shell and brass with pewter in arabesque or intricately foliate designs.