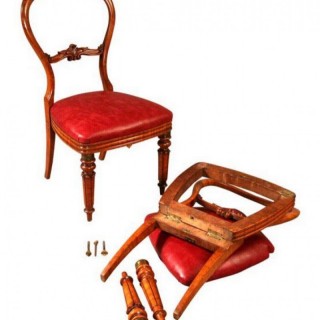 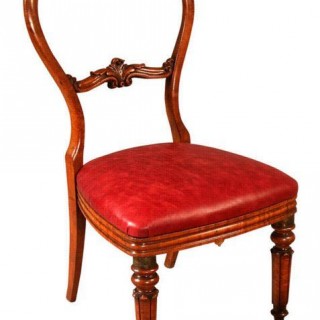 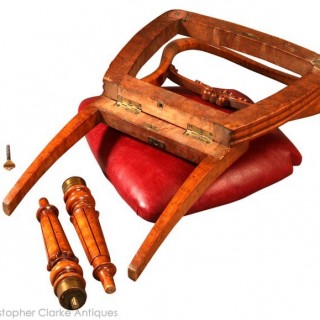 These bird’s eye maple, balloon back chairs differ to past designs we have seen. The majority of balloon back campaign chairs that come onto the market are by Ross of Dublin or occasionally by Riley of Manchester. These chairs have no maker’s name but the quality is good and aside from the design they stand out for the timber used, which is in the solid as opposed to veneered. Although we have a library chair in this catalogue also made in maple it can be considered an unusual timber for campaign furniture. To dismantle these chairs the seat, which is held by a bolt to the front rail and one to the back, is first removed. The front legs, which have caps to their tops with brass bolts, are unscrewed. A single bolt holds the remaining seat frame in the horizontal position and when this is taken out it will fold on its two hinges against the chair back. It is known that W. Blackie used this principal for folding chairs in his 1853 catalogue but the bolts were long and extended through the back rail to the front rail to stop the seat frame from folding. The seat height is low at 15 inches, which is probably about 1 1/2 inches less than a standard chair. This may be to further aid in packing the chairs and it is possible they were part of set with a table set to a corresponding height. One of the seats is marked 3 suggesting there were probably at least four chairs originally. Circa 1855.