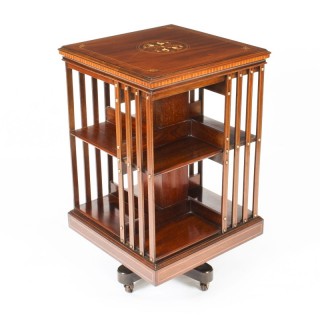 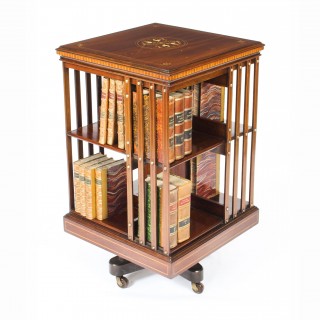 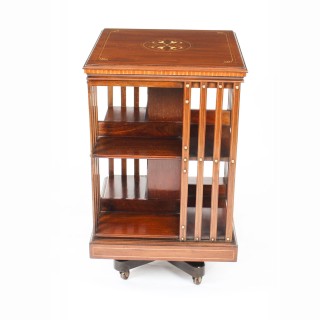 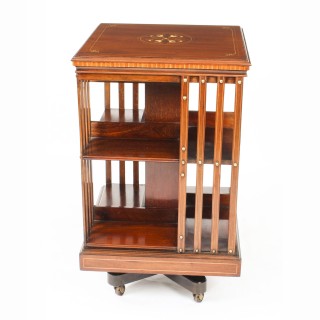 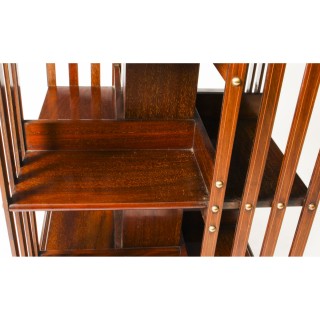 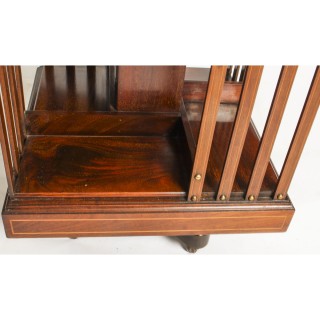 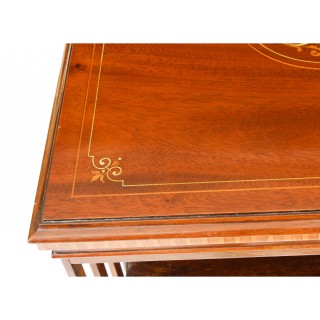 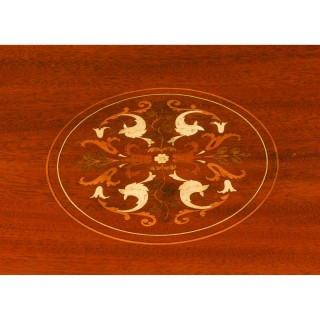 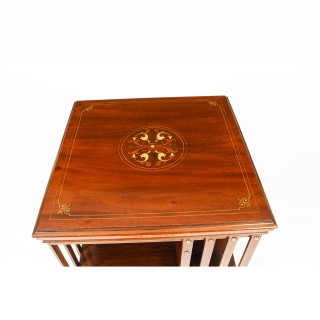 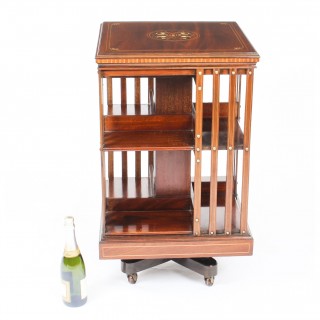 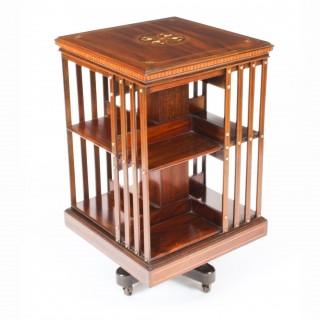 This is an exquisite antique Edwardian marquetry inlaid mahogany square revolving bookcase, circa 1900 in date.

This exquisite revolving bookcase is made of beautiful solid mahogany and the top has been masterfully inlaid with elaborate mythical sea beasts and scroll ornaments within splendid ivorine and boxwood stringings.

It features useful revolving compartments for books with the shelves and supporting slats being held by elegant brass studs. The slats and the splendid plinth base have matching boxwood stringings.

It revolves on a solid cast iron cross-platform base. The best quality Edwardian revolving bookcases had cast iron bases, as this meant that they would be sturdy and not tip when full of books, whereas the lesser versions had simple wooden bases.

The quality and attention to detail throughout are second to none.

Edwardian Period (1900 – 1910)
The Edwardian era saw the beginning of a new century with a new king and a new style of interior design. The heavy, dark, cluttered look of the Victorian era was gone, and in its place, something much lighter and more cheerful.

Some of the most famous designer for this era include:

This early 20th century style had an eclectic feel to it, and drew from elements of Georgian, Medieval and Tudor style. Light, airy, and simplicity of detail were key principles of this era.

Bamboo and wicker was the material of preference in Edwardian times. This added to the already delicate and breezy nature of the style. Other furniture was reproductions, drawing influence from baroque, rococo and empire style. The wing chair is a classic shape, and upholstery favoured chintz and damask in pale colours.

Shifting away from the darkness of the Victorian interior, colours were fresh and light, with an informal feel. Patterns were feminine, with flowers and floral designs being highly favoured. Colours were predominantly pastels: blue, lilacs, greens, yellows and grays. The floral theme was complemented by the liberal use of fresh flower arrangements. Living rooms often took darker colours such as dark green for fabrics, complemented with cream walls.