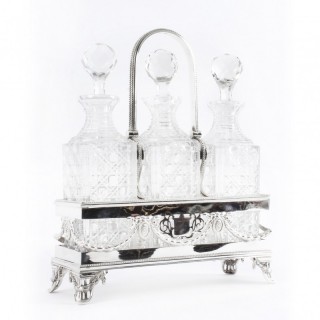 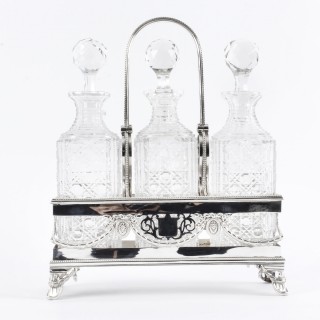 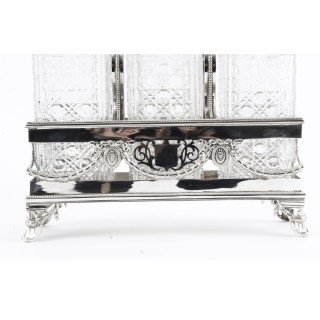 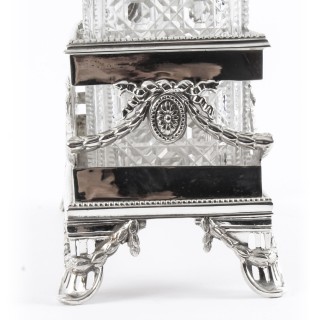 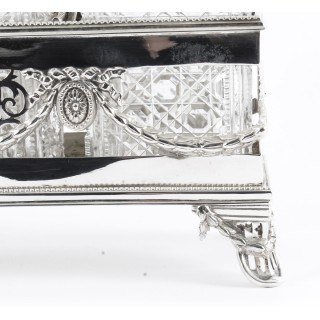 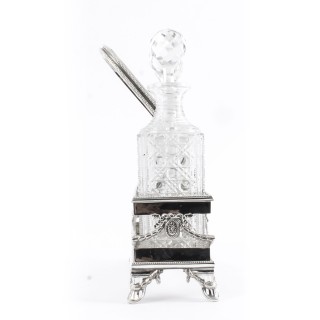 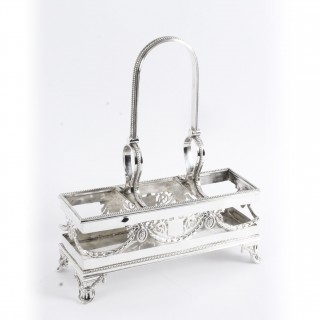 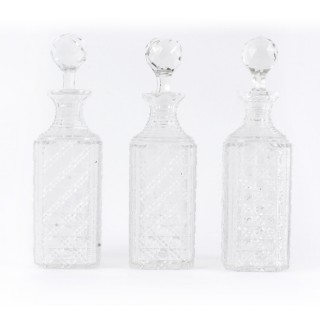 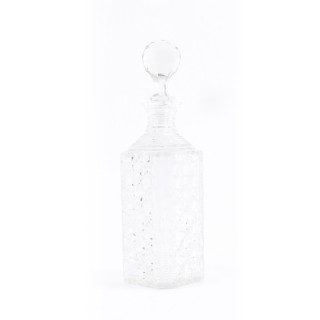 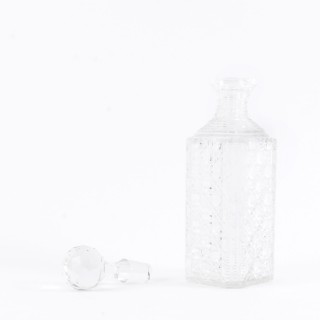 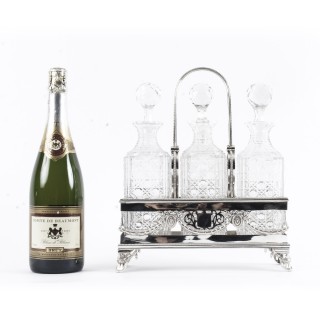 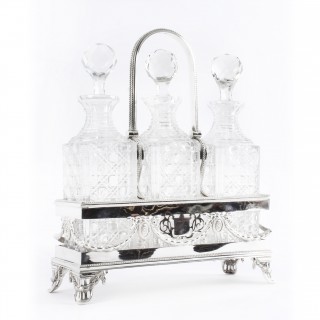 This magnificent tantalus set is by the renowned silversmiths Martin, Hall & Co of Sheffield, and retailed by the Manchester-based firm of top quality luxury items, Arnold & Lewis.

It is fitted with the three original brilliant crystal cut hobnail and lozenge decorated square decanters and stoppers and features a distinctive silver plated rectangular base which is beautifully pierced and decorated with garlands and floral motifs with an extra touch of finesse given by the beaded borders.

It is raised on four splendid matching pierced and foliate decorative feet.

The craftsmanship is second to none. Not only is this beautiful set highly decorative but is also very practical and would make a lovely gift.

Tantalus is a type of liquor decanter in which the bottle stoppers are locked down tightly by a metal bar. This was to prevent the theft of the contents by servants. Like the name suggests, the decanters themselves are visible, drawing temptation while unattainable. A key is required for entry.

Tantalus derived its name from the story of the mythological Greek king, Tantalus. To be tantalized is to be tempted with the unattainable, and the king, condemned to an eternity in Hades, was sorely tested. He was forced to stand forever in water that, when he bent to drink, would recede and to gaze upon foods he could only reach for and never grasp.

Martin, Hall & Co –
the origin of the firm was in the partnership established in 1820 in Sheffield by Henry Wilkinson and John Roberts who traded as Wilkinson & Roberts. Wilkinson left the business and in 1846 John Roberts entered in partnership with Ebenezer Hall (his apprentice in 1836) under the style Roberts & Hall.

In 1854 Richard Martin (of Martin Brothers & Naylor) and Joshua Hall (brother of Ebenezer Hall) entered into the partnership under the style Martin, Hall & Co. In 1866 the firm was converted into a Ltd.

The factory was active at Shrewsbury Works, Broad Street Park, Sheffield with showrooms in London (where they were listed as manufacturing silversmiths and electroplated manufacturers, silver, plated and steel cutlers), Sydney, Birmingham and Glasgow.

Besides its sterling silver and electroplated items the firm had a successful cheaper line of production on a patented white metal called “Martinoid”.

After WWI and a brief association of interests with Gladwin Ltd the firm went in liquidation and was struck off the register in 1936 (according to another source the business was sold to Frank Cobb & Co in 1931/1932).

Active at 7 St. Ann’s Square, Manchester from c. 1875 until c. 1905. The firm succeeded to I. Simmons as retail jewellers, goldsmiths and silversmiths, watch and clockmakers.