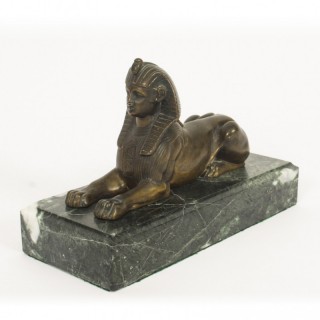 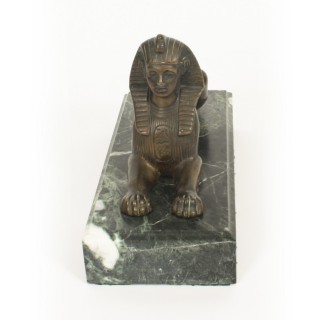 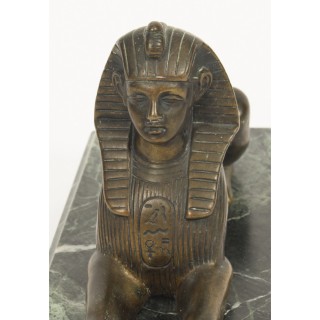 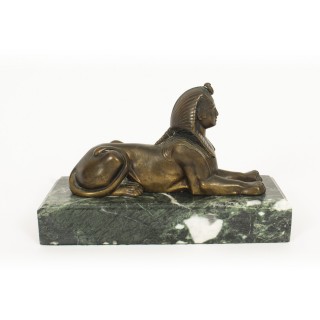 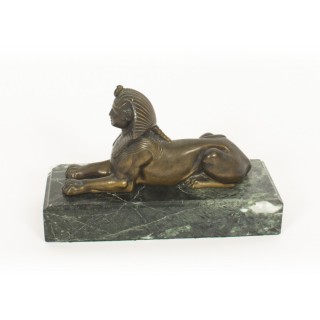 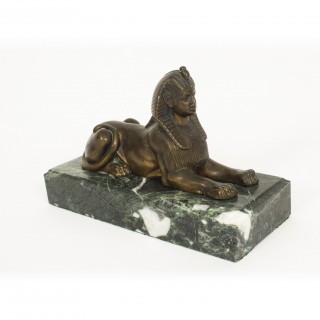 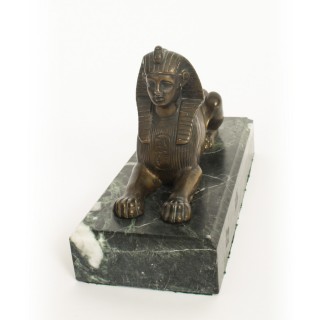 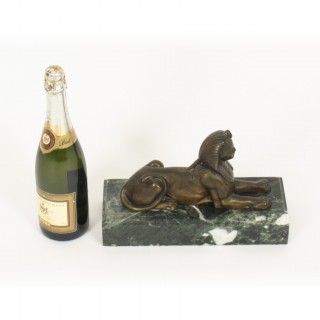 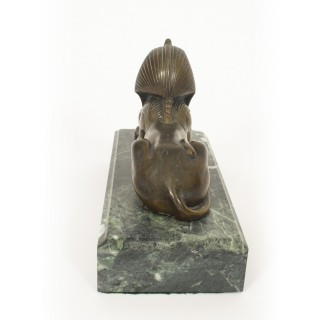 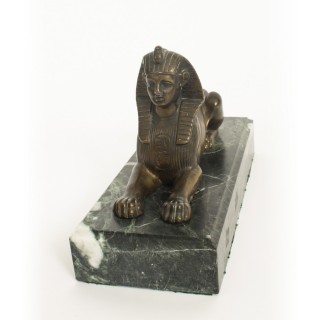 This is a fine antique 19th centurybronze Egyptian Revival figure of a recumbent sphinx raised on a decorative verde antico marble rectangular plinth.

It is a fine piece which will look beautiful wherever placed.

Serpentine is a major rock forming mineral and is found as a constituent in many metamorphic and weathered igneous rocks. Serpentine’s structure is composed of layers of silicate tetrahedrons linked into sheets; this structure is what gives it its high flexural strength rating.

Verde Antico is the commercial name for the serpentine “marble” derived from highly sheared ultramafic rocks that have been rewelded and metasomatized by the process of serpentinization. These ultramafic bodies are now recognized as segments of ancient oceanic crust that became part of the eastern North American continent during the Taconian orogeny. This is considered to be middle Ordovician in age, around 450 million years ago.

More deformation and metamorphism took place during the Acadian orogeny around 360 million years ago.

Empire symbols.
The Consular period in France began in November 1799 when the Directory was overthrown in a bloodless coup and replaced by three consuls, including Napoleon. This overthrow followed a series of military disasters and insurrections that led to a breakdown of faith in the government. A few weeks after the coup Napoleon was named First Consul. In 1802 he was named First Consul for life and in December 1804 Napoleon crowned himself Emperor. The period of his reign as Emperor, from May 1804 to June 1815, is known as the Empire period.

Napoleon, having gained his position through his political and military achievements, used artists, designers and architects to promote and legitimise his regime. He appointed Charles Percier (1764–1838) and Pierre-François-Léonard Fontaine (1762–1853) as the official architects and designers of the Empire period and they became major exponents of the Empire style.

Design of the Consular and Empire periods was characterised by militaristic elements – symbols of war and victory, imperial emblems, such as the golden eagle, classical palm leaves and laurel wreaths. These symbols of power made a direct visual connection between the regime and the glory and authority of the ancient Roman emperors.

Sphinxes, winged lions and creatures with heads of eagles were employed as table legs and armrests on chairs. Broad, austere surfaces of exotic woods, particularly mahogany, were ornamented with motifs in marquetry and ormolu (gilt-bronze) and the heavy, monumental style of the furniture reflected a grandiose magnificence. Heavy bases accentuated a monumental appearance and symmetry was closely followed. At the height of the Empire period, the style was majestic and magnificent.
Napoleon’s Egyptian Campaign brought about a craze in France for all things Egyptian. The detailed drawings of art and architecture published on his return by artist and archaeologist Dominique-Vivant Denon led to the incorporation of Egyptian motifs in the furniture and decorative arts of the following decades.

As well as military, Egyptian and Classical imagery, the Empire period also embraced opulence and imagery of love, sensuality and seduction: the swan – one of the forms the god Zeus took to seduce mortal women; the lyre – an instrument of art and seduction; and bows and arrows – the tools of Cupid.

Swans, also emblems of Venus and the adopted symbol of Josephine – were employed as armrests or as entire arms of chairs. Aspects of the myth of Cupid and Psyche were also a common theme. The butterfly symbolising both Psyche and the soul was a recurrent motif.

Other symbols and motifs of the Empire period included the bee, a symbol of immortality and resurrection, specifically chosen by Napoleon to link his new Empire to the very origins of France, the cornucopia or horn of plenty; images of Mars and Venus symbolising love and peace brought about through military success, and the initials of the Emperor and Empress – N for Napoleon and J for Josephine.

The Empire style achieved great popularity and was adopted in courts throughout Europe. In England it was known as the Regency style.