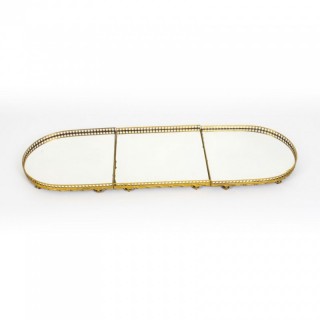 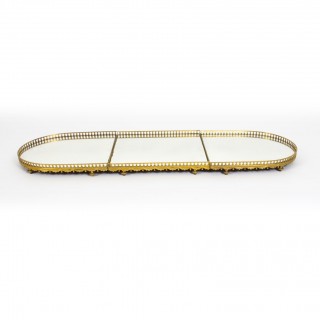 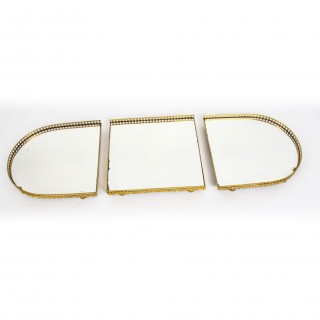 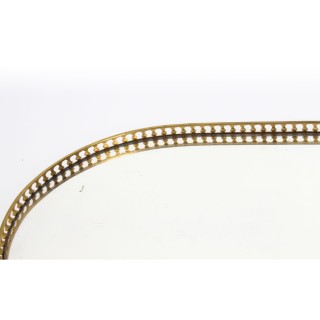 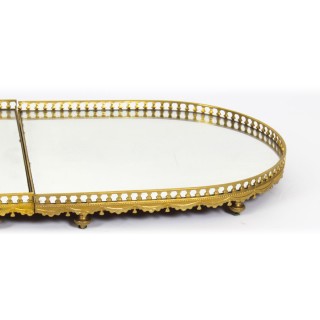 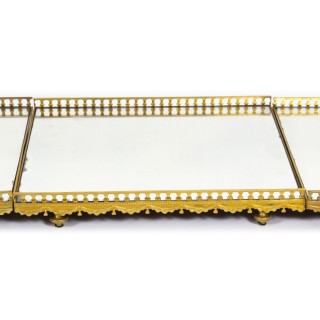 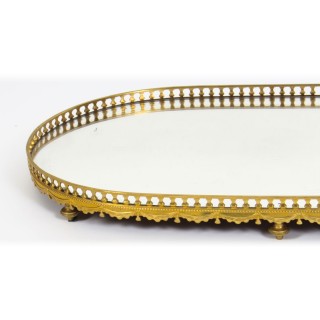 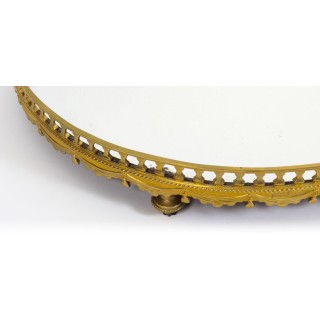 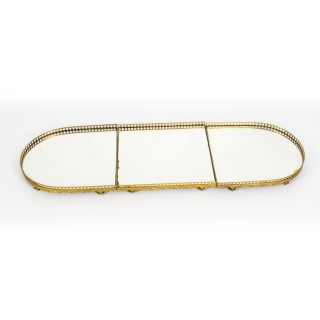 This is a superb antique French ormolu surtout-de-table / mirrored plateau in the classic Louis XVI style, circa 1870 in date.

The elongated oval form features three mirrored sections with their original inset mirrored glass. The mirror is surounded by a raised galleried border with an apron of ribbon tied swags to the frieze, and raised on toupie feet

The craftsmanship is second to none throughout and it is sure to add an unparalleled elegance to any fine dining experience.

Condition:
In excellent condition, with some natural ageing to the mirror surface, please see photos for confirmation.

Evolving from a simple plate or bowl on which to stand candlesticks and condiments, a surtout de table often took the form of a long galleried tray made of precious or gilded metals, on which a series of other objects were placed for display. It was often made in sections allowing its length to be determined by the leaves added to the table. During the later half of the 18th century and throughout the 19th century, no formal table was considered compete without one. Today, they are still seen and used in the most formal dining rooms.

Surtout de table first appeared in 1692 at the meals for the wedding of Philippe II, Duke of Orléans (then duc de Chartres) and Louis XIV’s legitimized daughter Françoise Marie de Bourbon, as “a great silver gilt piece of a new invention”. At first it was designed to hold candles, condiments, and other clutter on the table, and protect a polished wooden table from the staining caused by spillage from the salt and vinegars in the condiments. During the first half of the 18th century, as the great central and ceremonial salt cellars fell from favour, to be replaced by smaller individual salt cellars, and the sugar sculpture trionfo declined, the surtout de table evolved to fill the role of ornamental table centrepiece.

It often took the form of a raised galleried tray which would be filled with matching candelabra, figurines, vases and epergnes, the gallery itself sometimes containing candle sconces. They were not always constructed from precious metals; porcelain and glass were often used, as might be sculptures made from sugar. The top of the tray was often a mirror, to show the underside of the objects on it, and increase reflected light. Others continued as sculptural forms, sometimes becoming extremely extravagant.

It was not uncommon, if a surtout de table were commissioned for a specific house, for an indigenous theme to be used in the style. Hence, a hunting lodge may have a surtout de table with figurines of dogs and their quarry while a grander town palace would feature the most fashionable Rococo or Baroque styles of the day. Military figures and regimental officers’ messes often commissioned examples with military subjects.

During the 1850s, the fashion for themed dining table decoration reached its apogee and the surtout de table reflected this. Porcelain factories such as Meissen produced elaborate models and figurines which replaced the classical statuary of the Empire style with coloured porcelain mountains, rustic scenes with cattle and goats and, occasionally, even a jungle theme complete with lifelike porcelain snakes.