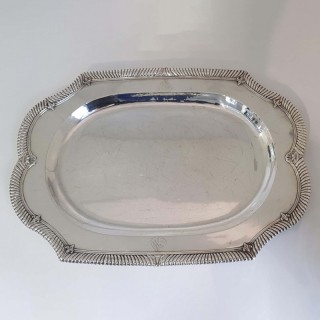 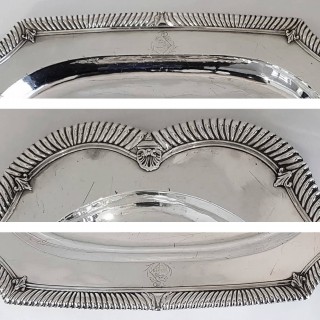 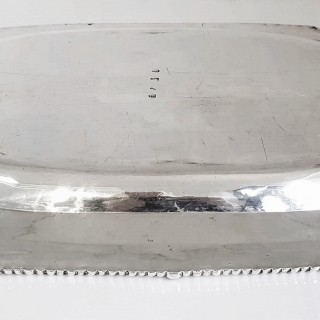 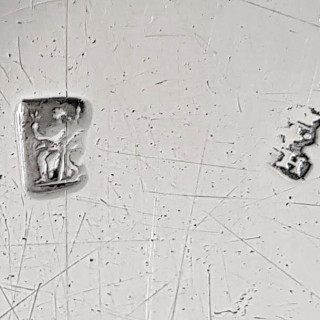 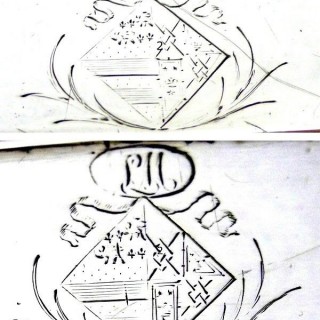 A large and important piece of early English Britannia standard* silver. A Georgian silver meat plate, or serving platter, of shaped oval form with a broad applied gadroon border and decorative motifs. Made by John Chartier, an important Hugeunot silversmith; his French influence is seen in the fleur de lys motifs around the border. Superb colour. Hand engraved to two sides with an armorial. Hand hammered finish on the back of the applied borders.
Weight 2753 grams, 88.4 troy ounces.
Length 52.5 cms. Width 37.5 cms.
London 1720.
Maker John Chartier.

JOHN CHARTIER
John (Jean) Chartier was the son of a Huguenot refugee from Blois. This important silversmith was naturalised in 1697, made a freeman of the Goldsmiths Company in 1698, and entered 2 marks as a largeworker between 1698 and 1699. His son Daniel was apprenticed to him in 1720 and his daughter married Peze Pilleau.

This handsome antique silver charger is in very condition. The engraved crests are still quite sharp. With a full set of clear English silver hallmarks on the underneath. Excellent colour. This platter has not been erased; there is some scratching to the top surface and a few small dinks. One small fault line to the reverse edge.