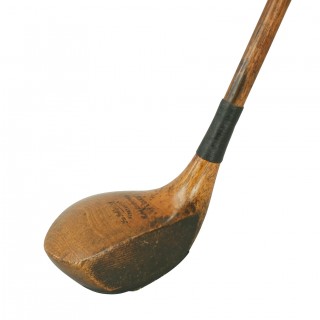 A beautiful socket head persimmon wood golf club, Driver, with hickory shaft. The club head is with partial brass sole plate and lead weight to the rear. The club head is stamped ‘Jas G Sherlock, HUNSTANTON, RHde Montmorency, SPECIAL’. The neck of the Driver does have a hairline crack so you would be advised not to use this club, but it would make a wonderful trophy, gift or even a good decorative item from a bye gone era.

James Sherlock advertises himself at Stoke Poges Golf Club as a practical golf club and ball maker. Also his speciality was repairing and copying golf clubs. He also said ‘Try my special Autograph putter, sure to please’.

James George Sherlock (1875 – 1966) was an English professional golfer and clubmaker born in High Wycombe. He finished in the top-ten of the Open Championship on several occasions, was an English international nine times in the annual match against Scotland from 1903-1913. In his long golf career, he had at least 16 professional wins and played in the Ryder Cup in 1921. Sherlock was a professional at four clubs, the first being Oxford University in 1895 to 1908, then Stoke Poges until 1920 where he became the professional at Hunstanton Golf Club where he remained until 1932 when he moved to Aldeburgh. He sold several clubs of his own design and later set up Sherlock, Ray and Turner with Ted Ray and John Henry Turner.
While at Stoke Poges he won the News of the World competition in 1910 and, the same year, defeated Harry Vardon in the final of the Portmarnock professional tournament. The following year against Jack White he played a home and away challenge match and an exhibition match with Braid against Vardon and Duncan at Stoke Poges. He went to Aberdeen to play 36 holes against George Duncan so was obviously a very competent golfer to mix with the likes of Braid and Vardon. Sherlock continued playing at an advanced age and attempted to qualify for the 1939 Open Championship. In 1958 he won his age group (age 70 and over) in the Teachers Senior Professional Tournament and played in the event as late as 1960 when he was 85 years old.

Hunstanton Golf Club was established in March 1891. It is a championship links – with Seaton Carew, the only one on the East Coast between Royal St George’s and Muirfield.