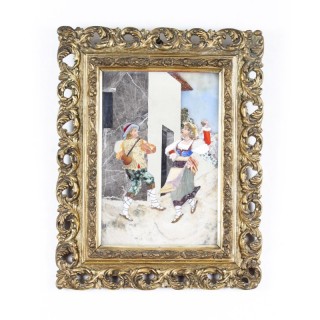 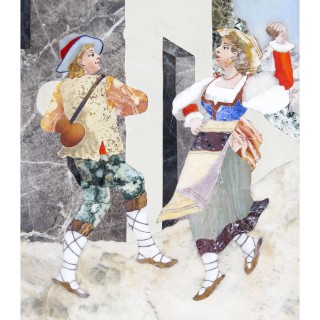 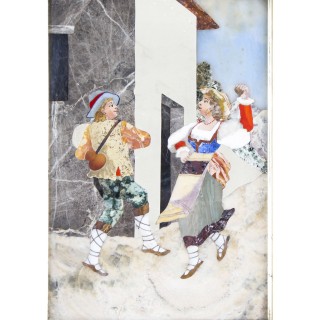 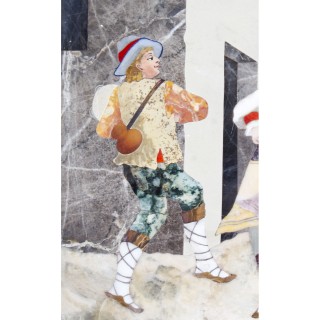 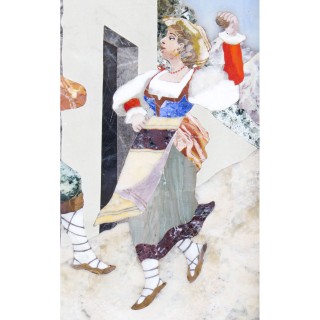 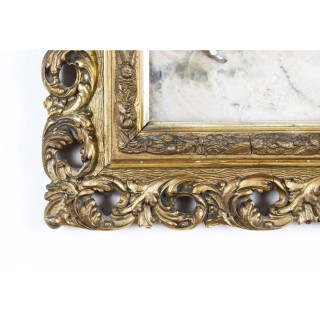 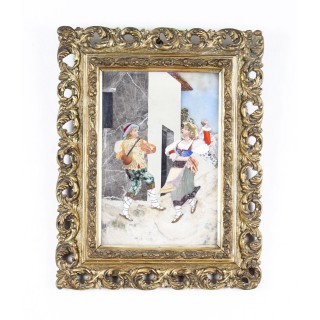 This stunning Pietra Dura plaque is of rectangular shape and was made with superb skill and artistry from many different hand-carved semi-precious stones.

It features a joyful scene of a man and woman dancing in Tyrolean style costumes in front of their house. The scene is captured in very high detail and the inlaid decoration in the various specimen hardstones is of the highest quality.

The plaque is framed in its original hand-carved giltwood frame.

Add this beautiful antique Pietra Dura plaque to a special wall in your home.

Condition:
It is in really excellent condition and is a delightful scene which will grace any room in your home.

Pietra dura is a term for the inlay technique of using cut and fitted, highly polished coloured stones to create images. It is considered a decorative art.

Pietre dure is an Italian plural meaning “hard rocks” or hardstones; the singular pietra dura is also encountered in Italian. In Italian, but not in English, the term embraces all gem engraving and hardstone carving, which is the artistic carving of three-dimensional objects in semi-precious stone, normally from a single piece, for example in Chinese jade.

The traditional convention in English has been to use the singular pietra dura just to denote multi-colored inlay work. However, in recent years there has been a trend to use pietre dure as a term for the same thing, but not for all of the techniques it covers, in Italian.

But the title of a 2008 exhibition at the Metropolitan Museum of Art, New York, Art of the Royal Court: Treasures in Pietre Dure from the Palaces of Europe used the full Italian sense of the term, probably because they thought that it had greater brand recognition. The material on the website speaks of objects such as a vase in lapis lazuli as being examples of “hardstone carving (pietre dure)”

The Victoria & Albert Museum in London uses both versions on its website, but uses pietra dura. “A method of inlaying coloured marbles or semi-precious stones into a stone base, often in geometric or flower patterns….”