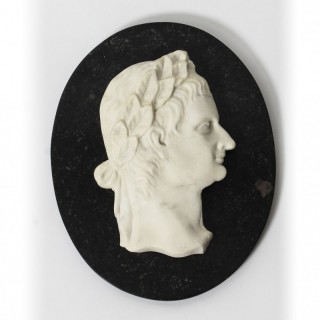 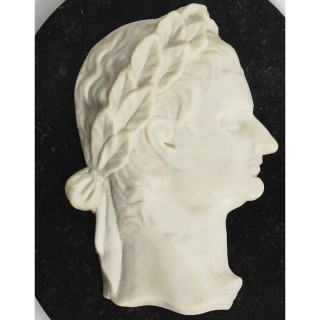 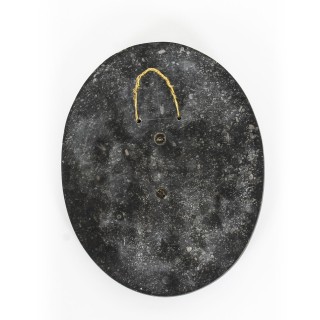 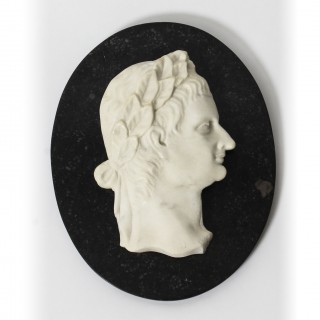 This is a beautiful Italian white Carrara marble profile bust of the Roman Emperor Claudius, dating from the mid 19th Century.

The sensitively carved Grand Tour plaque depicts the profile of Claudius with a laurel wreath in his hair on an oval dark grey fossil marble back plate.

The attention to detail throughout this item is second to none.

Claudius I was the emperor who added Britain to the Roman Empire.

Claudius was born on 1 August 10 BC in Gaul (now France) into the Roman imperial family. Tiberius, the second emperor of Rome, was his uncle. Claudius suffered from physical disabilities, including a limp and a speech impediment and was therefore treated with disdain by his family, and not considered as a future emperor. When Tiberius’s successor Caligula was assassinated in January 41 AD, the Praetorian Guard found Claudius in the palace and acclaimed him as emperor. The senate held out against Claudius for two days, but then accepted him.

Relations between Claudius and the senate continued to be difficult, and the new emperor entrusted much of his administration to influential Greek freedmen of low social standing, which in turn alienated the senators. He also heard trials in private, rather than allowing senators to be judged by their peers.

Although he lacked a military reputation, the essential attribute of an emperor, in 43 AD Claudius undertook the conquest of Britain. He visited the island for 16 days, to preside over the capture of Colchester, the capital of the new province, and then returned to Rome in triumph. As well as Britain, Claudius added Mauretania (North Africa), Thrace (the Balkans) and Lycia (part of Turkey) to the Roman Empire.

Claudius had two children by his wife Messallina – Britannicus and Octavia. In 48 AD Messallina went through a marriage ceremony with the consul Silius as part of a plot against Claudius. Both were executed. Claudius then married his niece Agrippina the Younger who with her son Domitius, was the only surviving direct descendant of Augustus. Agrippina quickly appointed her own supporters to important positions and persuaded Claudius to adopt Domitius – who took the name Nero – as his son.

Claudius died on 13 October 54 AD after being poisoned, probably on the orders of Agrippina who feared Claudius would appoint Britannicus his heir over her son Nero. Nero became Emperor.