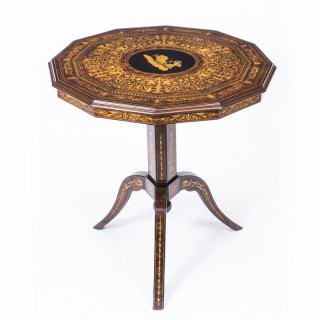 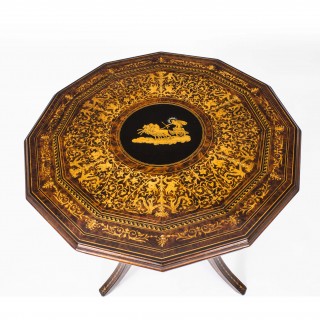 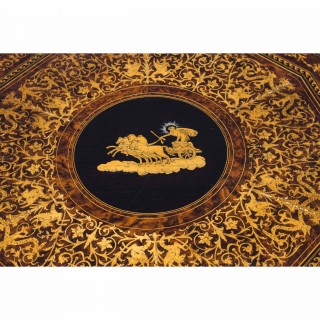 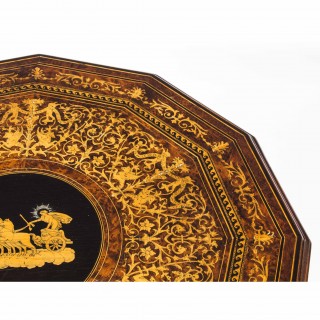 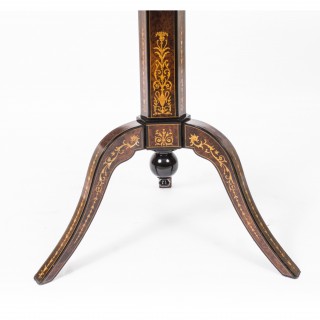 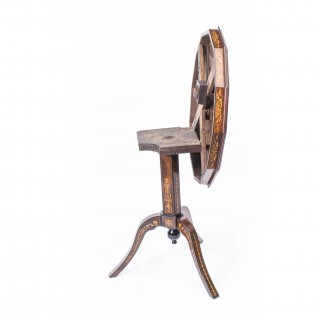 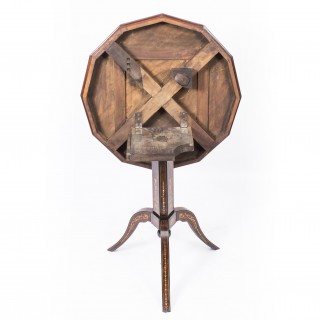 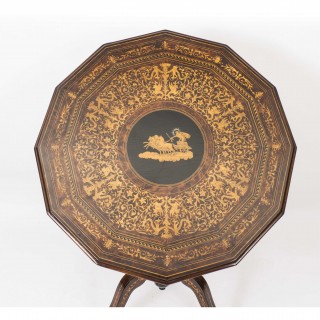 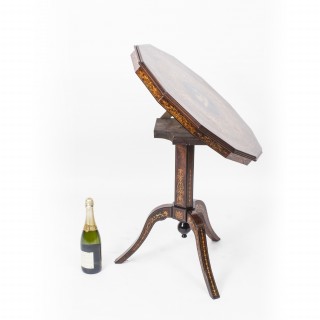 This is a beautiful and rare antique Italian Sorrento marquetry tilt top occasional table of exhibition quality, circa 1830 in date.

It was hand crafted from burr walnut, exotic specimen woods and olive wood. The twelve sided top richly inlaid and having a figural scene with inlaid details to the centre within bands of intricate marquetry. The central panel depicting the Greek God Helios, the personification of the sun in Greek mythology, driving his chariot of the sun across the sky.

The table is raised on a triangular central pedestal that terminates in three elegant splayed legs all masterfully inlaid in foliate patterns.

The top can be tilted into various positions to display the intricate marquetry decoration perfectly.

It is a lovely and decorative piece will enhance most interiors.

Helios was the personification of the Sun in Greek mythology. He is the son of the Titan Hyperion and the Titaness Theia, also known as Euryphaessa and brother of the goddesses Selene, the moon, and Eos, the dawn.

Helios was described as a handsome titan crowned with the shining aureole of the Sun, who drove the chariot of the sun across the sky each day to earth-circling Oceanus and through the world-ocean returned to the East at night. In the Homeric hymn to Helios, Helios is said to drive a golden chariot drawn by steeds and Pindar speaks of Helios’s “fire-darting steeds” Still later, the horses were given fire related names: Pyrois, Aeos, Aethon, and Phlegon.

As time passed, Helios was increasingly identified with the god of light, Apollo The equivalent of Helios in Roman mythology was Sol.

Walnut refers to the swirling figure present in nearly all walnut when cut and polished, and especially in the wood taken from the base of the tree where it joins the roots. However the true burr is a rare growth on the tree where hundreds of tiny branches have started to grow. Burr walnut produces some of the most complex and beautiful figuring you can find.

Olive is a small tree or shrub that grows up to 8–15 m tall with thorny branches. The wood of that tree is very hard and therefore suitable for making furniture. The tree main producers in Europe are: Spain, Italy and Turkey.