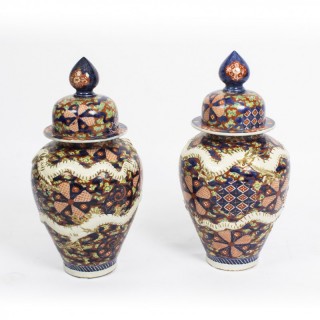 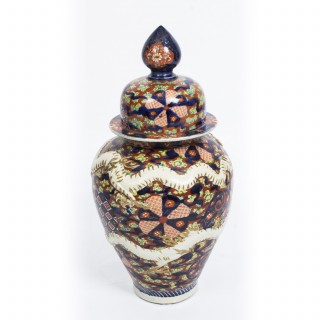 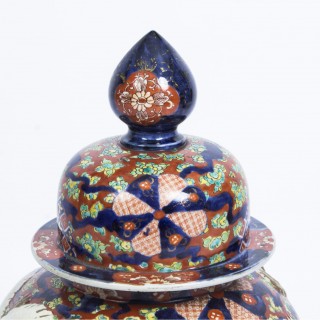 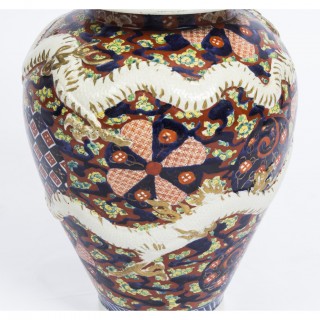 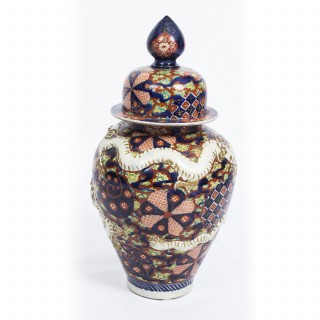 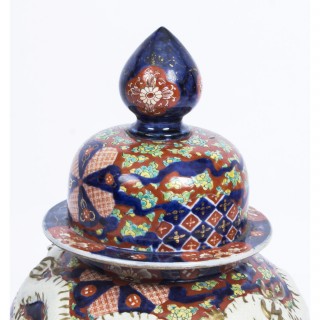 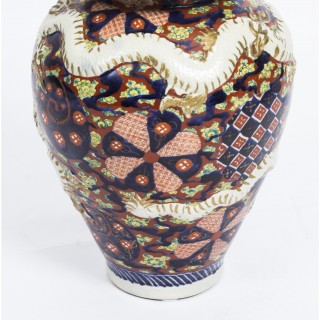 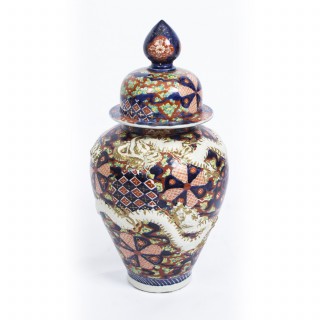 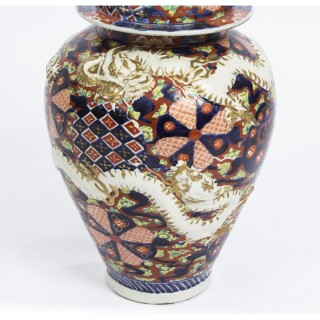 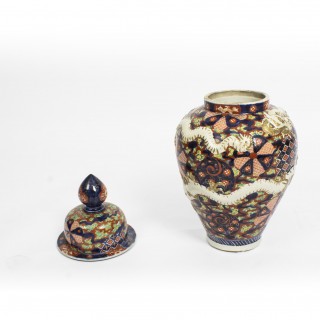 This is a lovely pair of Japanese Imari temple jars with lids, circa 1870 in date.

They feature a dense unusually decorated fan pattern design with with two overlaid relief dragons to each and the traditional Imari colour scheme of red, green, blue yellow and white with hand finished gilding.

Each jar features a matching domed lid with a flame shaped finial.
Add a touch of elegance to a special place in your home with these fabulous vases.

Condition:
In excellent condition with no chips cracks or signs of repair, please see photos for confirmation.

Imari porcelain was the European collectors’ name for Japanese porcelain wares made in the town of Arita, in the former Hizen Province, northwestern Kyūshū, and exported from the port of Imari, Saga, specifically for the European export trade. In Japanese, these porcelains are known as Arita-yaki (有田焼).
The Ko-Imari and Iro-Nabeshima usually have painted decor of underglaze blue and iron red painted on a white ground. The porcelain has a gritty texture on the bases, where it is not covered by glaze. Subject matter is of foliage and flowers. Enamel colors other than blue and red are used in the Kakiemon porcelain.

Imari was simply the trans-shipment port for Arita wares. The kilns at Arita formed the heart of the Japanese porcelain industry, which developed in the 17th century, after the porcelain clay was discovered in 1616 by an immigrant Korean potter Yi Sam-pyeong (1579–1655). Yi Sam-pyeong was kidnapped with his family(180 persons) after the Japanese invasion in Korea in 1598. After the discovery, Arita kilns introduced Korean style overglazing technique and refined designs from the political chaos china, where the Chinese kilns at Ching-te-Chen were damaged and New Qing dynasty government stopped trade in 1656-1684. First, blue-and-white porcelain made at Arita, imitating Chinese designs, was also widely exported to Europe through the Dutch East India Company, but “Imari porcelain” connotes Arita wares more specifically designed to catch the European taste.