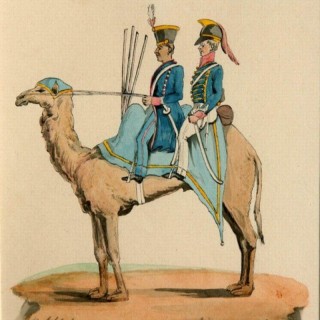 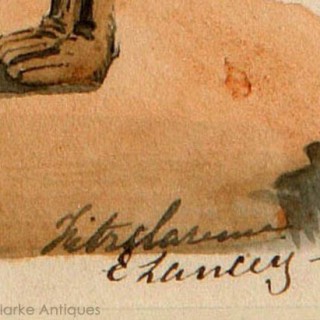 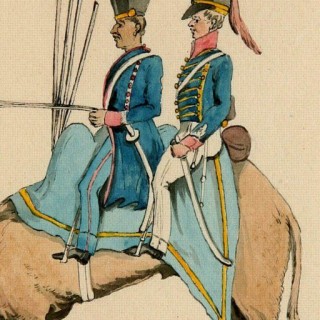 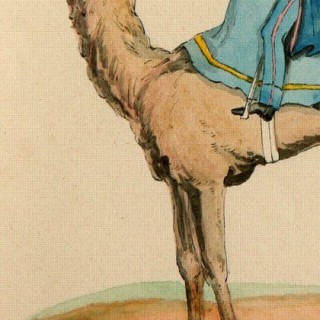 This watercolour shows the Rocket Corps of the Bengal Army in 1817 and is signed Fitzclarence and E. Lancey. George Augustus Frederick Fitzclarence was the eldest son of William IV and his mistress Dorothy Jordan. In 1817, as a Lieutenant Colonel he travelled from India to England carrying dispatches and recording his journey and experiences in a journal which was published by John Murray of Albermarle Street, London in 1819. Its full title is ‘Journal of a Route across India through Egypt to England’. This picture was used by the engravers R. Havell & Son to produce the aquatint to illustrate the book although in print it is combined with what was presumably another watercolour of the Dromedary Corps. The image shows a Sepoy to the front of the dromedary with a European officer sat behind. The title Rocket Corps is noted to the bottom left with the signature Fitzclarence to the right. Below Fitzclarence’s signature and in a different hand and pen is the signature E. Lancey. It is not known who Lancey was or why he signed the watercolour. Perhaps Lancey and Fitzclarence worked together to produce the finished picture with the recognition going to the author and greater name. Or maybe Lancey worked for the publishers and his signature was purely one of approval. It is probable that we will never know, however the work is certainly very competent and well drawn. An aquatint from the book is also available. Early 19th Century.