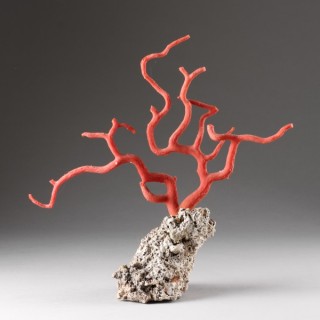 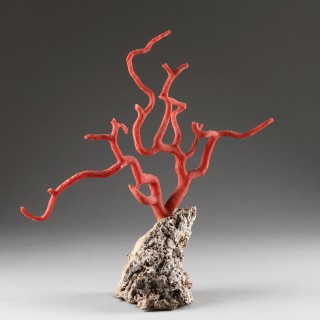 Antique Natural Specimen of a Branch of Red Coral

Coral is a hard calcareous substance secreted by many marine polyps as an external skeleton for support and habitation, which occurs in both single specimens and extensive accumulations. Historically, coral, and especially red coral, has always been regarded as exotic and mystical. Numerous apotropaic and therapeutic properties are imputed to coral. Worn as an amulet in the Middle Ages, it was believed to indicate toxicity, and thus one could avoid the possibility of being poisoned, to ward off evil and to cure disease.
Coral reefs are the living ‘rainforests of the sea’, they are home to a great diversity of fauna and many species of shells. There are 109 countries in the world with coral reefs and at least 90 of them are significantly threatened by an increase in water temperature as a result of climate change.

Antique Natural Specimen of a Branch of Red Coral