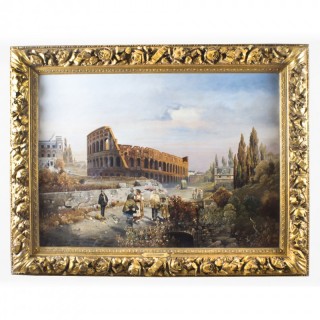 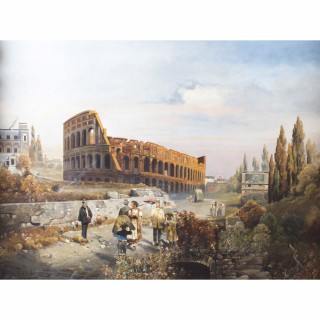 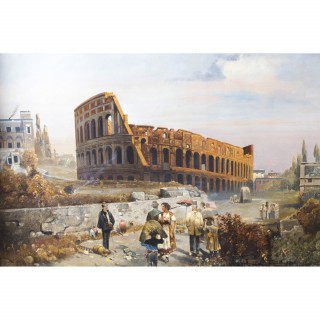 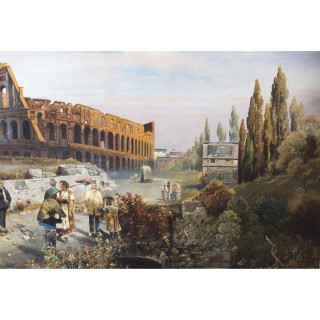 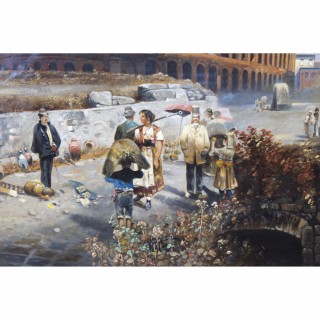 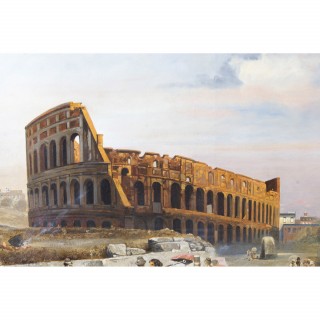 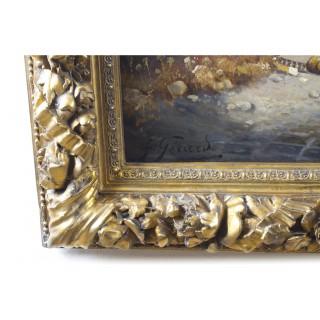 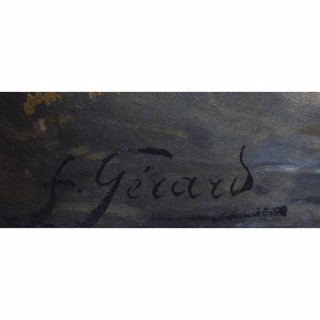 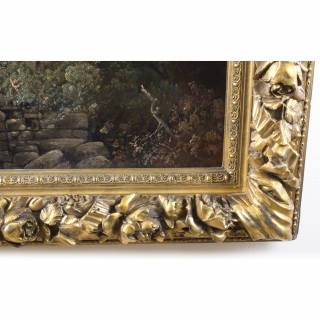 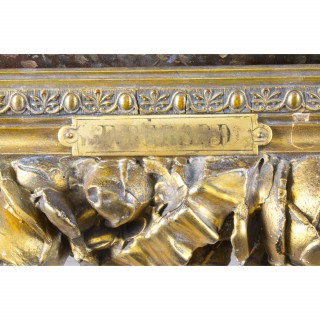 This is a beautiful oil on canvas painting of the colosseum in the centre of Rome by the renowned French artist François Gérard (1770 – 1837) and signed lower left.

This beautiful landscape captures a striking view of the Colosseum, also known as the Flavian Amphitheatre, it is an oval amphitheatre in the centre of the city of Rome, Italy, it features a figures walking enjoying the view.

Housed in it’s original and magnificent gilt gallery frame decorated with carved roses and ribbons.
Several examples of his work have sold at top auction houses:

French was born in Rome, on 4 Mау 1770, to J. S. Gérard and Cleria Matteï. At the age of twelve Gérard obtained admission into the Pension du Roi in Paris. From the Pension he passed to the studio of the sculptor Augustin Pajou which he left at the end of two years for that of the history painter Nicolas-Guy Brenet, whom he quit almost immediately to place himself under Jacques-Louis David.

In 1789 he competed for the Prix de Rome, which was carried off by his comrade Girodet. In the following year (1790) he again presented himself, but the death of his father prevented the completion of his work, and obliged him to accompany his mother to Rome. In 1791 he returned to Paris; but his poverty was so great that he was forced to forgo his studies in favour of employment which should bring in immediate profit. David at once availed himself of his help, and one of that master’s most celebrated portraits, of Louis-Michel Le Pelletier de St Fargeau may owe much to the hand of Gérard. This painting was executed early in 1793, the year in which Gérard, at the request of David, was named a member of the revolutionary tribunal, from the fatal decisions of which he, however, invariably absented himself.

In 1794 he obtained the first prize in a competition, the subject of which was The Tenth of August, that is, the storming of the Tuileries Palace. Further stimulated by the successes of his rival and friend Girodet in the Salons of 1793 and 1794, Gérard (nobly aided by Jean-Baptiste Isabey, the miniaturist, produced in 1795 his famous Bélisaire. In 1796 a portrait of his generous friend (conserved today in the Louvre) obtained undisputed success, and the money received from Isabey for these two works enabled Gérard to execute in 1797 his Psyche et l’Amour (illustration). At last, in 1799, his portrait of Madame Mère established his position as one of the first portrait-painters of the day.

In 1808 as many as eight, and in 1810 no less than fourteen, portraits by him, were exhibited at the Salon, and these figures afford only an indication of the enormous numbers which he executed yearly; all the leading figures of the Empire and of the Bourbon Restoration, all the most celebrated men and women of Europe, sat to Gérard. This extraordinary vogue was due partly to the charm of his manner and conversation, for his salon was as much frequented as his studio; Madame de Staël, George Canning, Talleyrand, the Duke of Wellington, have all borne witness to the attraction of his society. Rich and famous, Gérard was stung by remorse for earlier ambitions abandoned; at intervals he had indeed striven with Girodet and other rivals, to prove his strength at history painting, still a more prestigious genre than portraiture; his Bataille d’Austerlitz (1810) showed a breadth of invention and style which are even more conspicuous in L’Entrée d’Henri IV à Paris (at Versailles), the work with which in 1817 he did homage to the returned Louis XVIII. After this date Gérard declined, watching with impotent grief the progress of the Romantic school.
Loaded with honors – baron of the Empire in 1809, member of the Institut on 7 March 1812, officer of the légion d’honneur, first painter to the king – he worked on, sad and discouraged; the revolution of 1830 added to his disquiet; and on 11 January 1837, after three days of fever, he died.

Gérard is best remembered for his portraits; the color of his paintings has suffered, but his drawings show in uninjured delicacy the purity of his line; and those of women are specially remarkable for a virginal simplicity and frankness of expression. His students included Heinrich Christoph Kolbe.