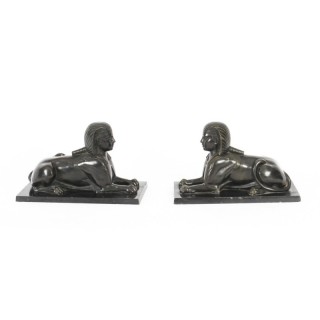 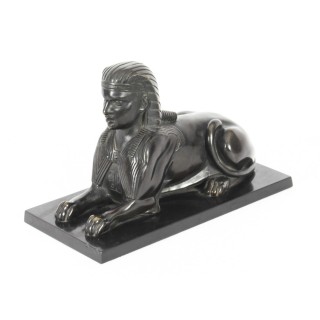 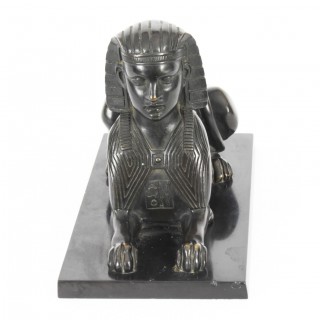 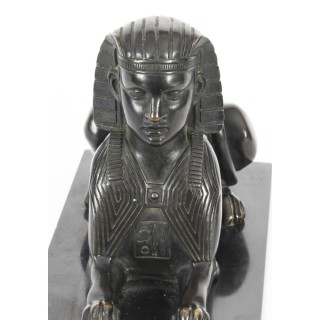 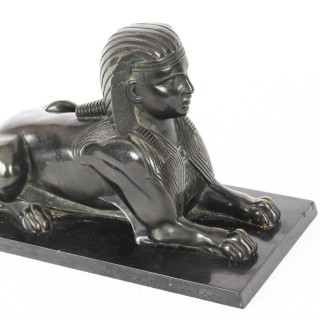 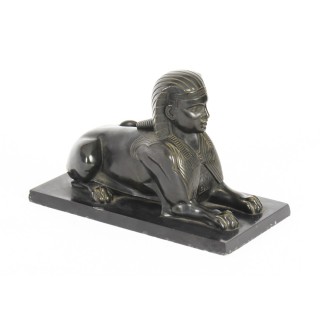 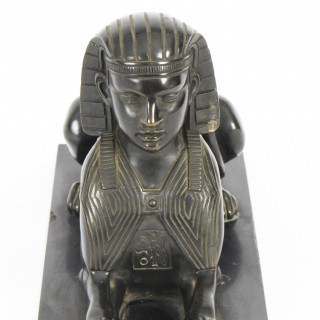 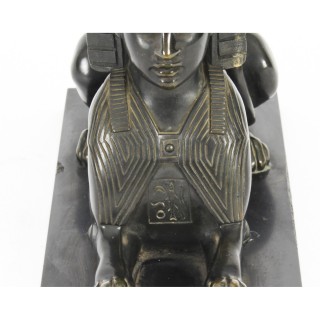 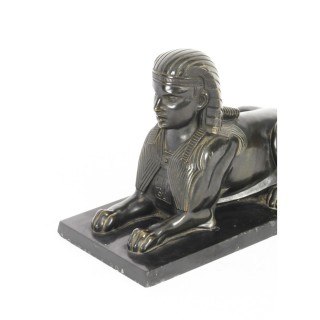 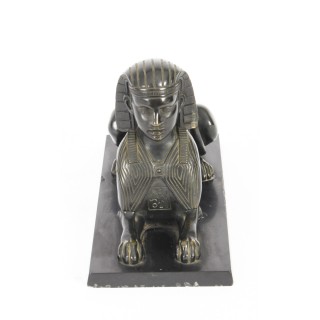 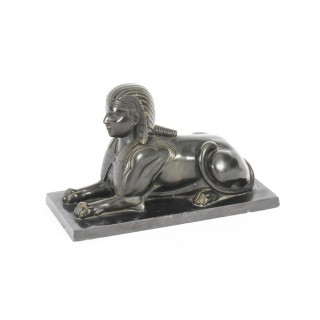 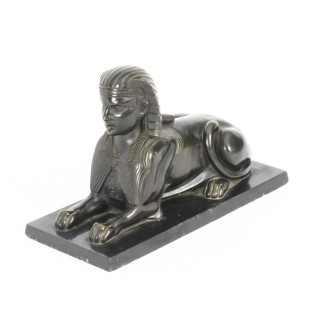 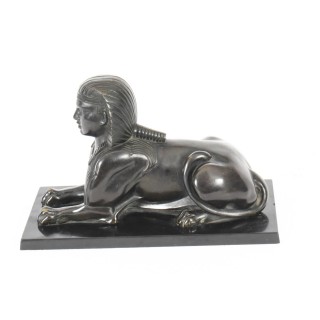 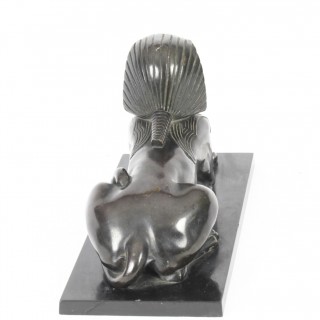 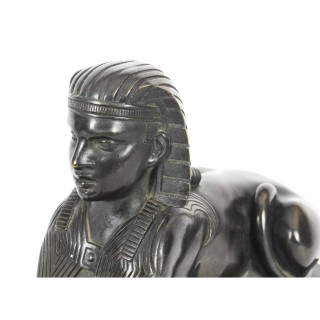 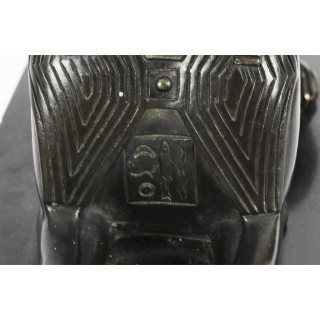 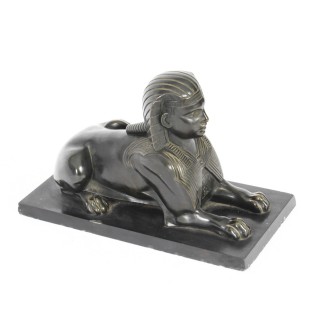 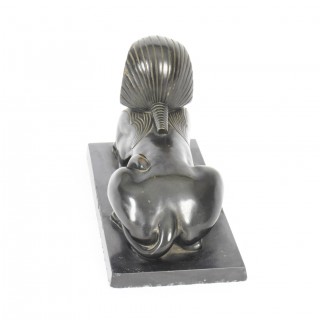 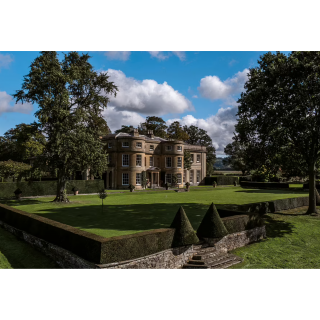 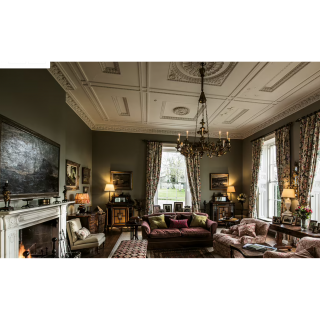 This is a truly stunning antique pair of French patinated-bronze sculptures of recumbent Sphinx, dating from Circa 1860.

Each sphinx is modelled with a pharaonic headdress on a man’s head with a lions body.

Both statues have a lovely dark brown patination which is shown in all its glory, and they are raised on rectangular Belgium fossil black marble bases.

The attention to detail here is remarkable and this truly beautiful pair of bronze statues are sure to receive the maximum amount of attention wherever placed.

Provenance:
Wormington Grange, they can be seen in the picture of the living room, at the back on the pair of cabinets.

Wormington Grange
is a Grade II* listed country house in the civil parish of Stanton, Gloucestershire, England. It lies a mile south of the village of Wormington. Although the lodge is of Tudor origins, the main house was constructed in the 1770s for Nathaniel Jeffreys.

Sphinx, mythological creature with a lion’s body and a human head, an important image in Egyptian and Greek art and legend. The word sphinx was derived by Greek grammarians from the verb sphingein (“to bind” or “to squeeze”), but the etymology is not related to the legend and is dubious. Hesiod, the earliest Greek author to mention the creature, called it Phix.
The winged sphinx of Boeotian Thebes, the most famous in legend, was said to have terrorized the people by demanding the answer to a riddle taught her by the Muses—What is it that has one voice and yet becomes four-footed and two-footed and three-footed?—and devouring a man each time the riddle was answered incorrectly. Eventually Oedipus gave the proper answer: man, who crawls on all fours in infancy, walks on two feet when grown, and leans on a staff in old age. The sphinx thereupon killed herself. From this tale apparently grew the legend that the sphinx was omniscient, and even today the wisdom of the sphinx is proverbial.
The earliest and most famous example in art is the colossal recumbent Great Sphinx at Giza, Egypt, dating from the reign of King Khafre (4th king of 4th dynasty, c. 2575–c. 2465 BCE). This is known to be a portrait statue of the king, and the sphinx continued as a royal portrait type through most of Egyptian history. Arabs, however, know the Great Sphinx of Giza by the name of Abū al-Hawl, or “Father of Terror.”
Through Egyptian influence the sphinx became known in Asia, but its meaning there is uncertain. The sphinx did not occur in Mesopotamia until about 1500 BCE, when it was clearly imported from the Levant. In appearance the Asian sphinx differed from its Egyptian model most noticeably in the addition of wings to the leonine body, a feature that continued through its subsequent history in Asia and the Greek world. Another innovation was the female sphinx, which first began to appear in the 15th century BCE. On seals, ivories, and metalwork the sphinx was portrayed sitting on its haunches, often with one paw raised, and was frequently paired with a lion, a griffin (part eagle and part lion), or another sphinx.
About 1600 BCE the sphinx first appeared in the Greek world. Objects from Crete at the end of the middle Minoan period and from the shaft graves at Mycenae throughout the late Helladic age showed the sphinx characteristically winged. Although derived from the Asian sphinx, the Greek examples were not identical in appearance; they customarily wore a flat cap with a flame like projection on top. Nothing in their context connected them with later legend, and their meaning remains unknown.

After 1200 BCE the depiction of sphinxes disappeared from Greek art for about 400 years, though they continued in Asia in forms and poses similar to those of the Bronze Age. By the end of the 8th century, the sphinx reappeared in Greek art and was common down to the end of the 6th century. Often associated with Oriental motifs, it was clearly derived from an Eastern source, and from its appearance it could not have been a direct descendant of the Bronze Age Greek sphinx. The later Greek sphinx was almost always female and usually wore the long-tiered wig known on contemporary sculptures of the Daedalic style; the body became graceful, and the wings developed a beautiful curving form unknown in Asia. Sphinxes decorated vases, ivories, and metal works and in the late Archaic period occurred as ornaments on temples. Although their context is usually insufficient to enable their meaning to be judged, their appearance on temples suggests a protective function.

By the 5th century clear illustrations of the encounter between Oedipus and the sphinx appeared on vase paintings, usually with the sphinx perched on a column (as can be seen on a red-figure Nolan amphora by the Achilles Painter in the Museum of Fine Arts in Boston or on the Vatican Museum’s Attic cup). Other monuments of Classical age showed Oedipus in armed combat with the sphinx and suggested an earlier stage of the legend in which the contest was physical instead of mental. Of such a stage the literature gave no hint, but battles of men and monsters were common in Asian art from prehistoric times down to the Achaemenid Persians, and Greek art may have adopted from the Middle East a pictorial theme that Greek literature did not share.