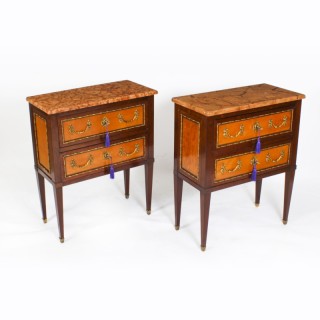 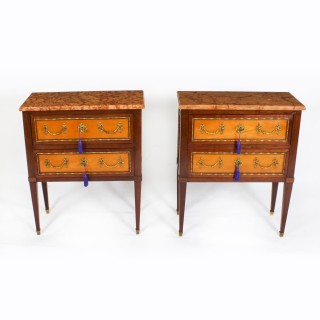 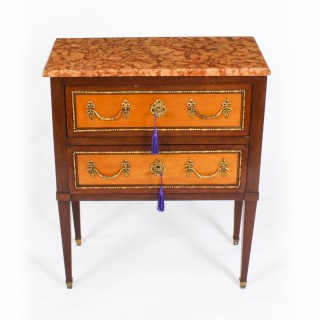 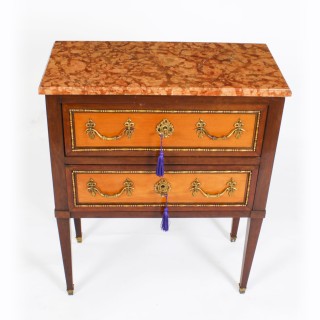 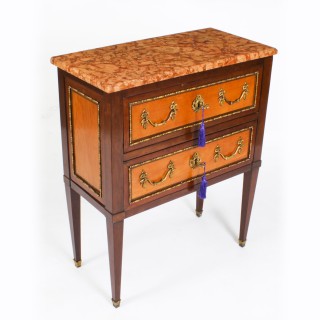 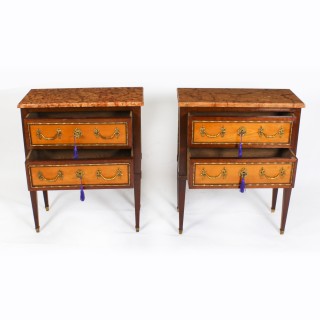 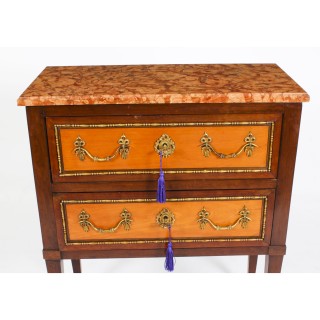 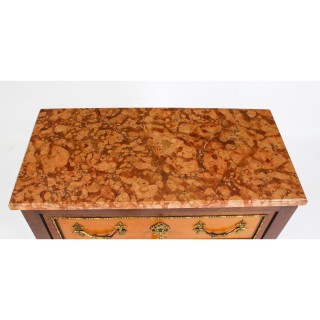 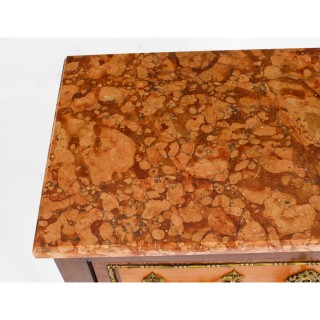 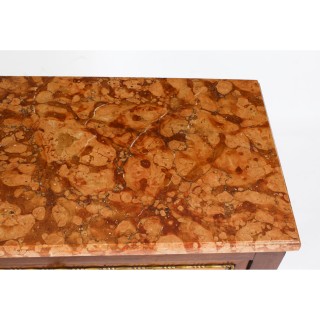 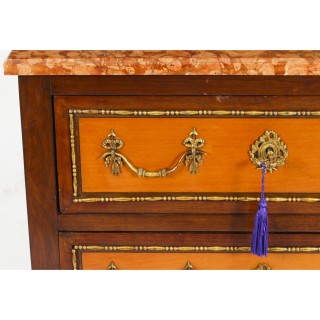 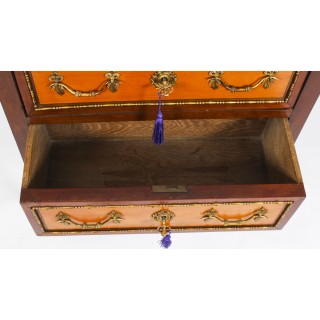 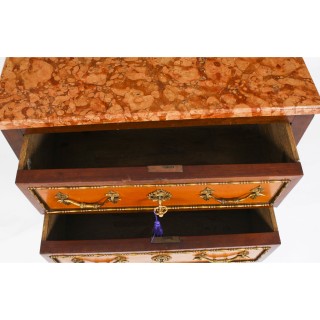 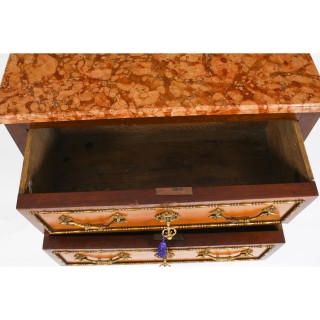 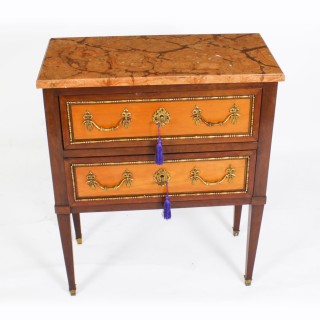 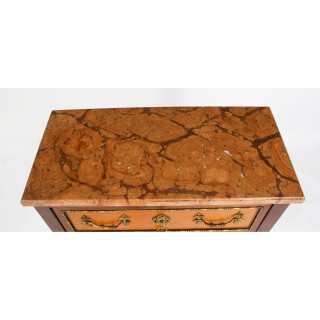 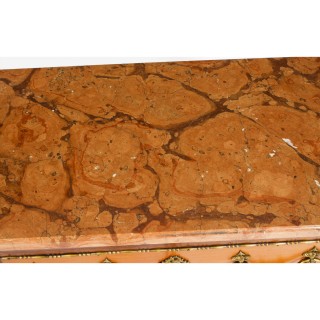 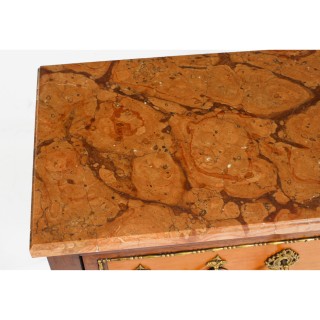 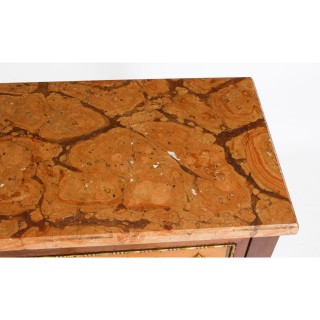 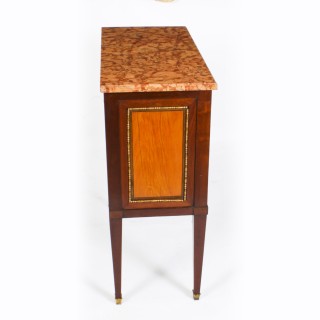 This is a gorgeous pair of antique Victorian marble topped satinwood and maple bedside commodes dating from the mid 19th century.

These two-drawer commodes are crafted from the most beautiful satinwood and maple and have solid oak lined drawers. To add extra opulence to this wonderful pair, each has luxurious gilded ormolu mounts and handles.

They are surmounted with distinctive Rosso Carpazi marble tops and are raised upon square tapered legs with ormolu sabots.

Complete with the original working locks and keys.

Add a touch of elegance to a special room in your home with this superb pair of antique commodes.

Condition:
In excellent condition having been beautifully cleaned and waxed in our workshops. As antique items, the commodes show minor signs of use commensurate with age, these minor condition issues are mentioned for accuracy and, as seen in the accompanying photographs, they display beautifully.
Please see photos for confirmation

Rosso Carpazi Marble is a material born out of the mountains of Albania. The brown-red ground mass of this beautiful marble is partially brecciated and quite rich. This natural stone exudes an element of passion and elegance and is ideal as a special piece on fine furnishings.

Asprey was established in England in 1781 and founded as a silk printing business by William Asprey, it soon became a luxury emporium. In 1841, William Asprey’s elder son Charles went into partnership with a stationer located on London’s Bond Street. In 1847 the family broke with this partner and moved into 167 New Bond Street, the premises Asprey occupies today.

From its central London location Asprey advertised ‘articles of exclusive design and high quality, whether for personal adornment or personal accompaniment and to endow with richness and beauty the table and homes of people of refinement and discernment.’ An early speciality was dressing cases. Asprey crafted traditional cases and designs, mostly in leather, suitable for the new style of travel ushered in by railways. The main competitors at the time were H.J. Cave & Sons. Asprey was recognised for its expertise when it won a gold medal for its dressing cases at the International Exhibition of 1862 but lost out to its rivals, H.J. Cave & Sons in 1867.

The company consolidated its position through acquisitions. In 1859 Asprey absorbed Edwards, an award winning maker of dressing cases and holder of a Royal Warrant. The company also purchased the Alfred Club at 22 Albemarle Street, which backed on to the New Bond Street store and meant that Asprey now had entrances on two of London’s most fashionable streets.

In 1862, Asprey was granted a Royal Warrant by Queen Victoria. The Prince of Wales, later to be crowned Edward VII, granted another Royal Warrant. In 1953, for the coronation of Elizabeth II, Asprey paid homage with the Asprey Coronation Year Gold Collection, which featured a dessert, coffee and liqueur service in 18-carat gold and weighed almost 27 pounds. In April 1953, it went on show in the New Bond Street store and subsequently toured the United States.

As the business grew, the company acquired manufacturing facilities and hired silversmiths, goldsmiths, jewellers and watchmakers including Ernest Betjeman, the father of the distinguished poet John Betjeman, one of the most highly regarded craftsman and designers of his day.

In the twenties, commissions poured in from around the world, from American millionaire J. Pierpont Morgan to potentates such as the Maharaja of Patiala, who commissioned a huge teak travelling trunk for each of his wives in which each trunk was fitted with solid silver washing and bathing utensils with waterspouts of ornate tiger head and lined with blue velvet. Asprey cigarette cases became collectable amongst young sophisticates who delighted in its other modern products, including travel clocks, safety razors and automatic pencil sharpeners.