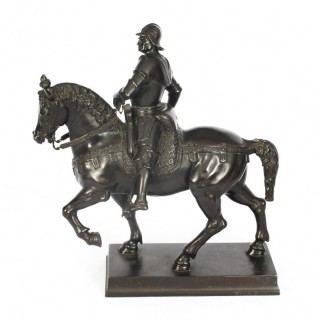 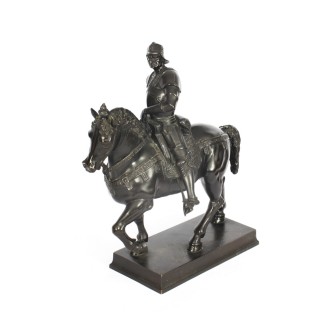 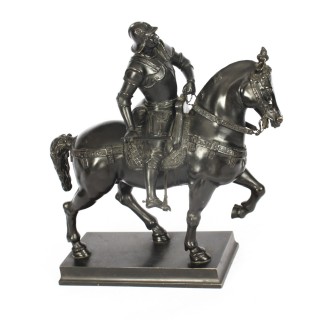 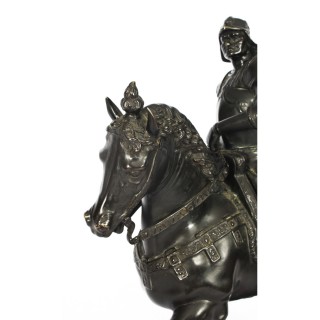 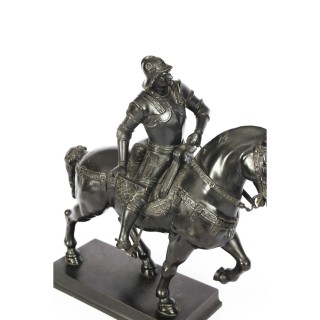 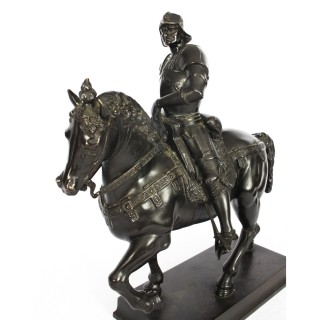 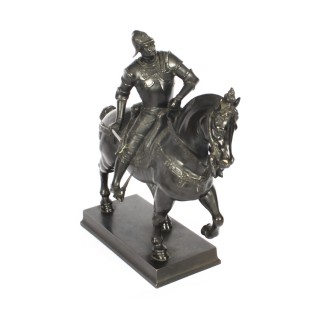 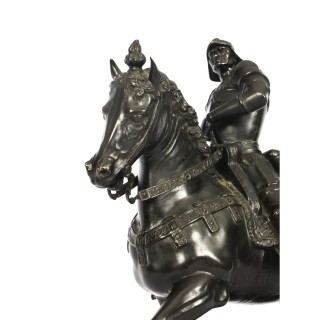 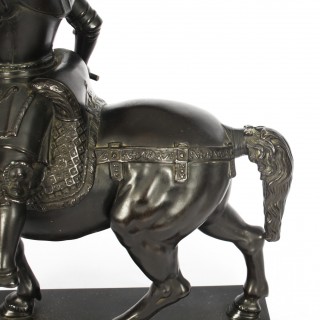 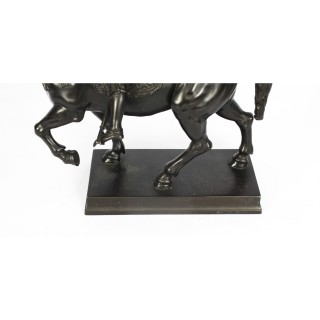 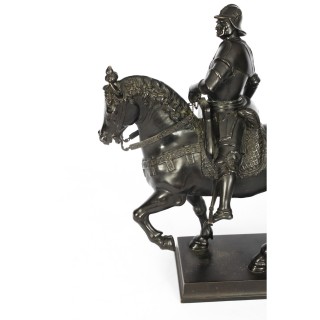 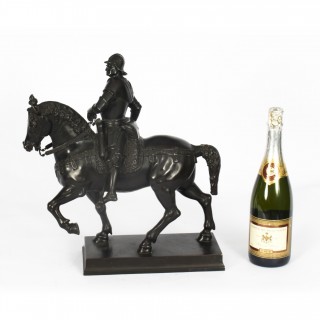 This is a superb large antique patinated bronze Equestrian Statue of Bartolomeo Colleoni, circa 1860 in date.

This stunning patinated bronze statue is after the original Renaissance sculpture which was executed by Andrea del Verrocchio in 1480–88, in Italy. Exactly as in the original, it portrays the commander Bartolomeo Colleoni, who served for a long time under the Republic of Venice, wearing typical battle ready military equipment while riding his horse.

The artist has faithfully replicated the original pose of the horse who is moving with a raised leg and is supported by the other three legs, therefore, conveying a great sense of movement.

The figure of Colleoni himself is extremely life-like as much as to convey the idea of a strong military commander, emanating titanic power and energy.

The craftsmanship is second to none throughout all aspects of this striking bronze which is sure to add an unparalleled touch of class to your home.

The Equestrian statue of Bartolomeo Colleoni is a Renaissance sculpture in Campo Santi Giovanni e Paolo, Venice, Italy, executed by Andrea del Verrocchio in 1480–88. Portraying the condottiero Bartolomeo Colleoni (who served for a long time under the Republic of Venice), it has a height of 395 cm excluding the pedestal. It is the second major equestrian statue of the Italian Renaissance, after Donatello’s equestrian statue of Gattamelata (1453).
In 1475 the Condottiero Colleoni, a former Captain-General of the Republic of Venice, died and by his will left a substantial part of his estate to the Republic on condition that a statue of himself should be commissioned and set up in the Piazza San Marco. In 1479 the Republic announced that it would accept the legacy, but that (as statues were not permitted in the Piazza) the statue would be placed in the open space in front of the Scuola of San Marco. A competition was arranged to enable a sculptor to be selected. Three sculptors competed for the contract, Verrocchio from Florence, Alessandro Leopardi from Venice and Bartolomeo Vellano from Padua. Verrocchio made a model of his proposed sculpture using wood and black leather, while the others made models of wax and terracotta. The three models were exhibited in Venice in 1483 and the contract was awarded to Verrocchio. He then opened a workshop in Venice and made the final wax model which was ready to be cast in bronze, but he died in 1488 before this was done.
He had asked that his pupil Lorenzo di Credi, who was then in charge of his workshop in Florence, should be entrusted with the finishing of the statue, but the Venetian state after considerable delay commissioned Alessandro Leopardi to do this. In 1496, the statue was erected on a pedestal made by Leopardi in the Campo SS. Giovanni e Paolo, where it stands today.
Verrocchio based the sculpture on Donatello’s statue of Gattamelata, as well as on the ancient statue of Marcus Aurelius in Rome, the St. Mark’s Horses in Venice, the Regisole (a late antiquity work in Pavia, now lost), and the frescoes of the Funerary Monument to Sir John Hawkwood by Paolo Uccello and of the Equestrian Monument of Niccolò da Tolentino by Andrea del Castagno.
The main problem he had to face was of statics: representing the horse while moving, with a raised leg, could cause stability problems due to the excessive weight of the bronze being supported only by three relatively thin legs. Donatello, in his monument at Padua, had partially solved the problem by putting the raised leg on a sphere. Verrocchio was the first to solve the problem in having the horse supported by three legs.
Although it was not placed where Colleoni had intended, art historian Passavent emphasised how fine it looks in its actual position, writing that “the magnificent sense of movement in this figure is shown to superb advantage in its present setting” and that, as sculpture, “it far surpasses anything the century had yet aspired to or thought possible”. He points out that both man and horse are equally fine and together are inseparable parts of the sculpture.
Verrocchio is unlikely to have ever seen Colleoni and the statue is not a portrait of the man but of the idea of a strong and ruthless military commander “bursting with titanic power and energy”. This is in contrast to Donatello’s statue at Padua of the condottiere known as Gattamelata with its “air of calm command” and all Verrocchio’s effort “has been devoted to the rendering of movement and of a sense of strain and energy”.