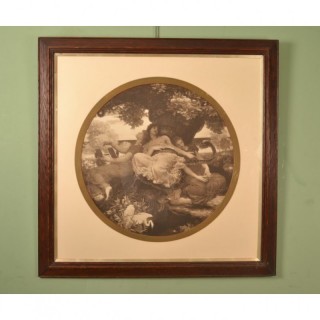 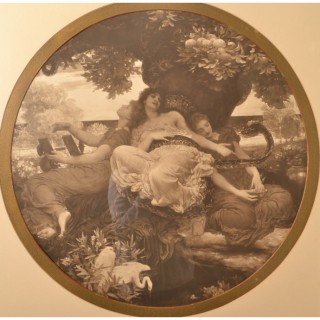 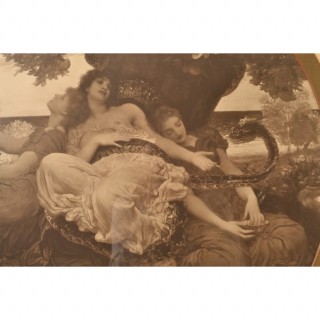 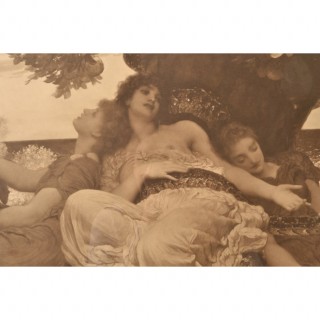 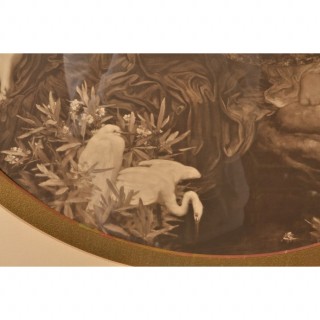 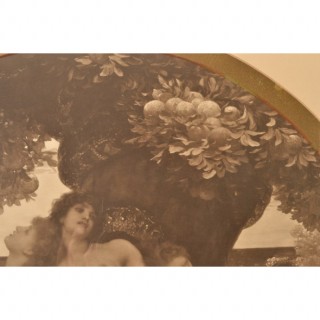 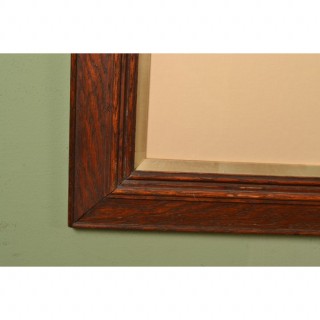 This is a beautiful print of the famous painting ‘Garden of Hesperides’ by Lord Fredric Leighton, painted in 1892.

The picture draws its theme from the ancient myth in which the Hesperides were assigned by the Goddess Hera to guard the golden apples which she had been given on her wedding to Zeus by Earth.

The theft of the apples is well known as one of the Hercules’ Ten Labours. In the painting, the Hesperides sing to the sleeping dragon in the garden at the end of the world where the apples were kept.

The lavish colours of the painting and the beauty of the scene make it extremely difficult to predict the invasion of Hercules, the slaying of the dragon and theft of the apples.

Leighton portrayed the nymphs relaxing under an apple tree; one of them is playing a lyre, while the other two are surrounded by the snake’s coils.
He replaced the dragon in the original myth with a serpent entwined around the tree and the body of the central figure. The inclusion of the serpent, the idyllic mood of the painting and the languor of the three female figures in the beautiful garden can be seen to represent eternal life before the fall from paradise.

It was common for Victorian artists to invest classical myths and stories with religious messages.

The print is presented in a simple wooden frame which compliments the print.

Lord Lever bought ‘The Garden of the Hesperides’ together with ‘Daphnephoria’ in 1913 from Christie’s.

The painting can be found in the collection of Lady Lever Art Gallery in Liverpool.

In Greek mythology, the Hesperides – are nymphs who tend a blissful garden in a far western corner of the world. Ordinarily the Hesperides number three, like the other Greek triads (the Three Graces and the Moirai). Hesiod a Greek scholar named them as: Aegle, , Espere and Arethusa also know as the Daughters of the Evening.
The Garden of the Hesperides is Hera’s orchard in the west, where either a single tree or a grove of immortality-giving golden apples grew. The apples were planted from the fruited branches that Gaia gave to Hera as a wedding gift when Hera accepted Zeus. The Hesperides were given the task of tending to the grove, but occasionally plucked from it themselves. Not trusting them, Hera also placed in the garden a never-sleeping, hundred-headed dragon named Ladon as an additional safeguard.

However, in the mythology surrounding the Judgement of Paris, the Goddess of Discord Eris managed to enter the garden, pluck a golden apple, inscribe it “To the most beautiful” and roll it into the wedding party (to which she had not been invited), in effect causing the Trojan Wars.

In later years it was thought that the “golden apples” might have actually been oranges, a fruit unknown to Europe and the Mediterranean before the Middle Ages. Under this assumption, the Greek botanical name chosen for all citrus species was Hesperidoeidē.