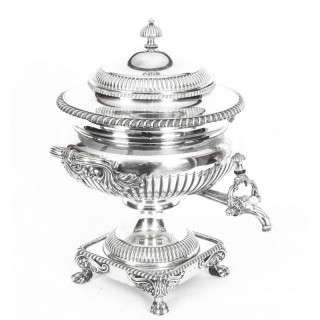 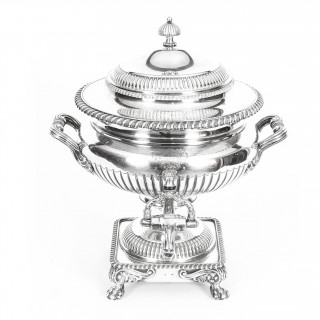 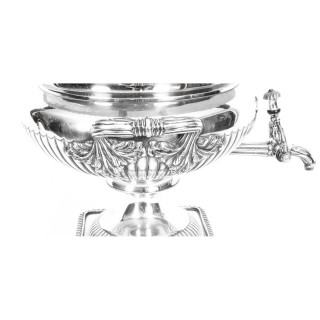 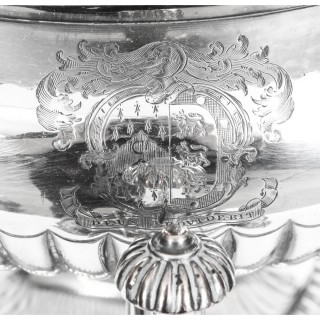 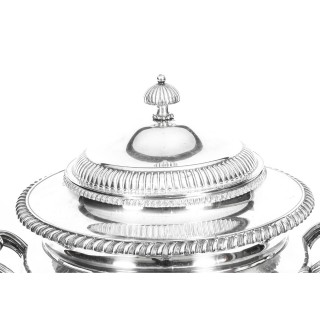 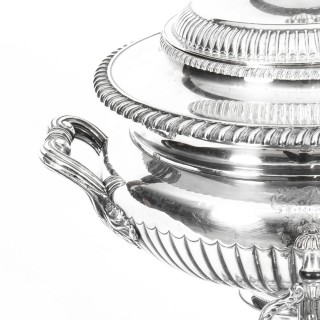 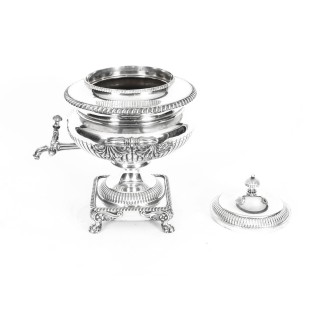 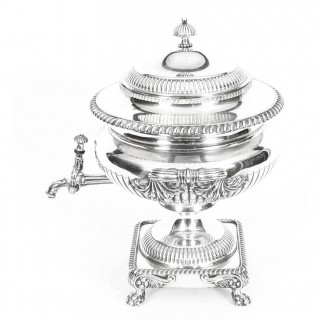 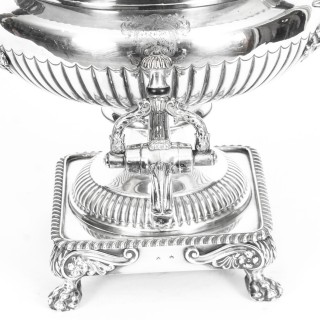 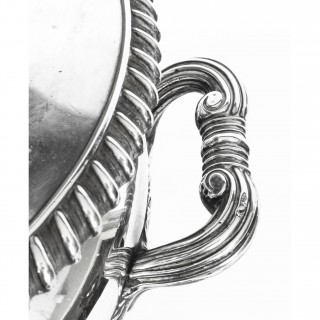 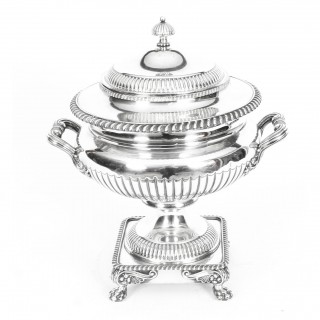 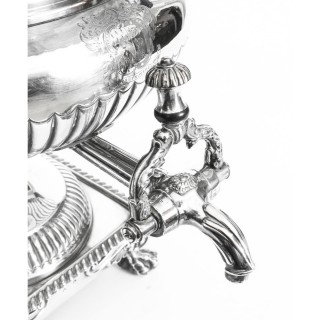 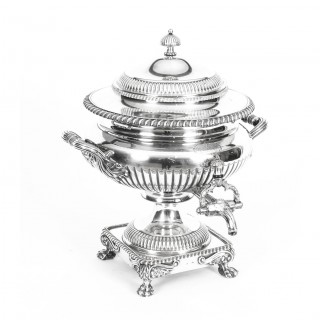 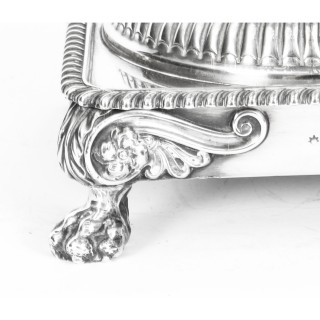 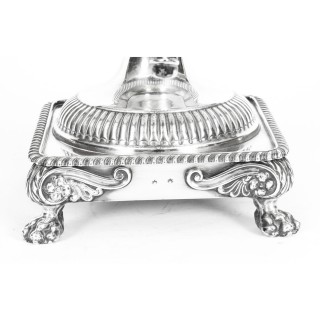 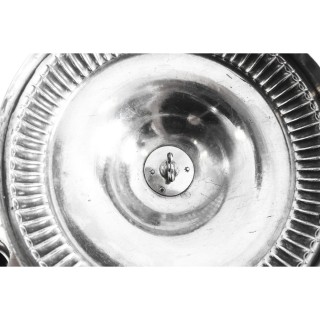 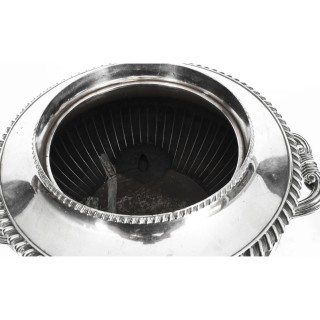 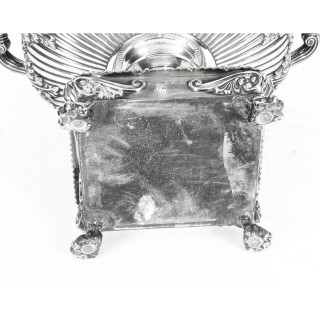 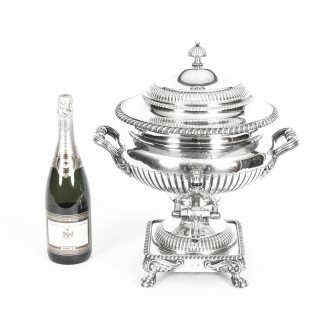 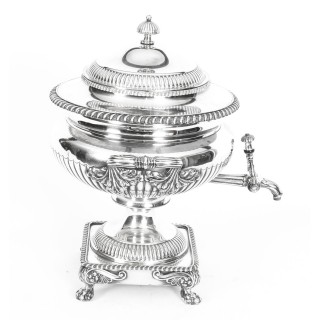 This is a wonderful antique Regency Old Sheffield silver plated tea urn, Circa 1820 in date.

This handsome antique Old Sheffield silver plated samovar has a reeded finial, foliate handles and tap finial. Typical decoration of the period with half fluted decoration to the body and lid and gadroon borders. The lions paw feet with rose mounts are impressive.

To the front is a hand engraved crest and motto “DEUS PROVIDEBIT” which translates as God will provide.

It is made from silver on copper and bears the twin sun mark for the renowned silversmith Matthew Boulton and dates from Circa 1820.

This tea urn is of fabulous quality and will add an Imperial look to your surroundings.

Matthew Boulton
Boulton was not a “goldsmith” or a “silversmith” in the accepted sense, yet for his achievements and services to the craft of goldsmithing he is fully worthy of inclusion in the list of great English goldsmiths.
Matthew Boulton was born in Birmingham on 3 September 1728. His father Matthew Boulton (senior) was a “toy maker” and silver stamper specialized in the production of shoe-buckles.
Boulton junior was taken into partnership in 1749 and was left in sole charge of the business after the death of his father in 1759.
Boulton had the ambition to establish a manufacturing complex where craftsmen in the various branches of the “toy” trade would work together under one roof, enabling him to reap both wholesale and retail profits. In 1761 he realized his project purchasing a one-hundred- year-lease of the “Soho” estate at Handswoth Heath (two miles from Snow Hilton the Wolverhampton Road).
In 1762 Boulton took into unofficial partnership John Fothergill who would act as a travelling salesman to advertise his wares and the factory moved to Soho in the same year.
The partnership concentrated in the production of steel “toys” a little later on buttons and buckles made in a variety of substances, including , of course, silver. In 1762 Soho factory began to produce articles in “Sheffield” plate and one of the first to adopt “Sterling silver thread” edging which prevent to reveal the underlying copper.
Boulton soon became the largest manufacturer of “Sheffield plate” of the country expanding the business of Soho manufactory in the production of bijouterie, objects d’art and de virtue, in ormolu, pinchbeck and shell, and in clocks.
In 1765 Boulton began the manufacture of pieces in solid silver, being obliged to send every piece of plate to Chester to be marked (Chester was the nearest assay office, 72 miles away from Birmingham). Boulton was the promoter a petition obtaining in 1773 the Royal Assent to assay silver in Birmingham (the same was for Sheffield).
Boulton & Fothergill entered their joint mark consisting of their initials, MB before IF. After the death of Fothergill (1782) Boulton punched his plate with his initials alone.
When manufacturers of plated ware were permitted to register their marks at the Assay Office in Sheffield (1784), Boulton registered his mark of “twin suns” under the name Boulton M. & Co.
The most important designers for Boulton plate in the neo-classic taste were Robert Adams and James Wyatt.
Matthew Boulton died on 17 August 1809.
The mark MB continued to be used by Matthew Boulton Plate Co until 1832.

Old Sheffield Plate – or ‘fused plate’ as it is sometimes known, was the first commercially viable method of plating metal.

The material was accidentally invented by Thomas Boulsover, of Sheffield’s Cutlers Company, in 1743. While trying to repair the handle of a customer’s decorative knife, he heated it too much and the silver started to melt. When he examined the damaged handle, he noticed that the silver and copper had fused together very strongly. Experiments showed that the two metals behaved as one when he tried to reshape them, even though he could clearly see two different layers.