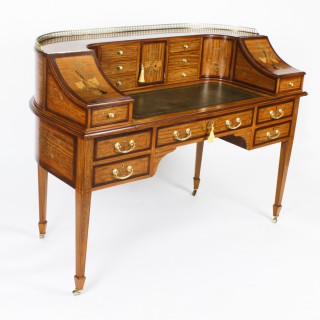 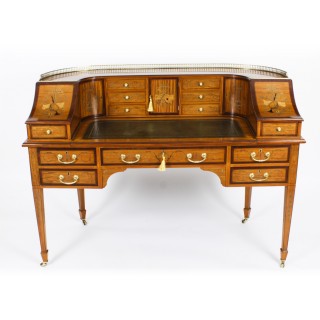 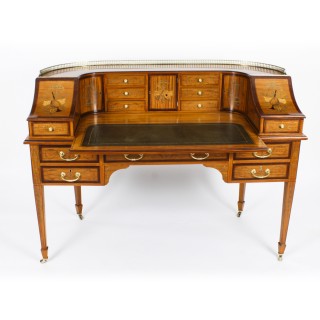 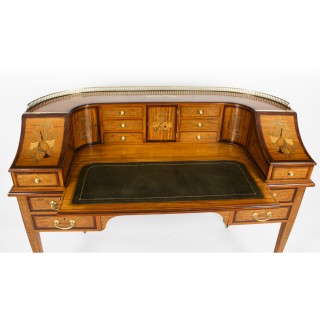 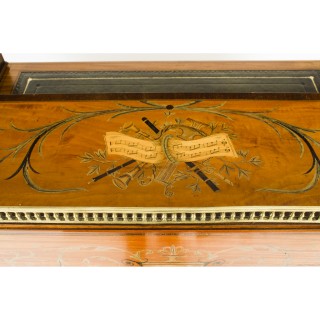 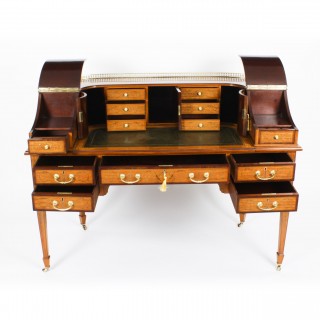 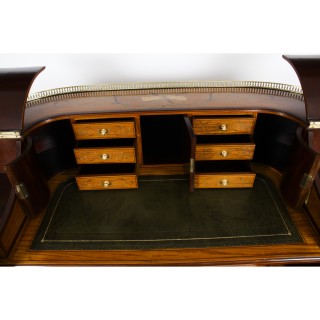 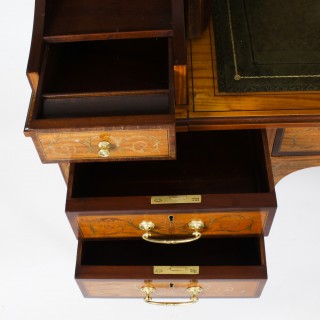 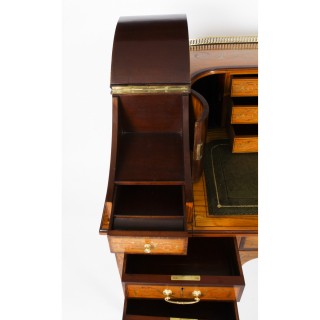 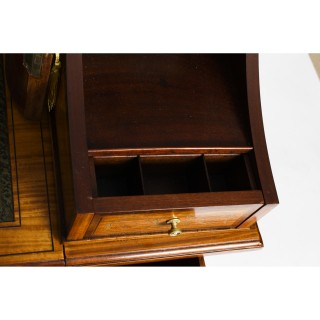 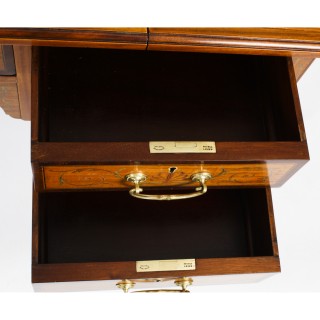 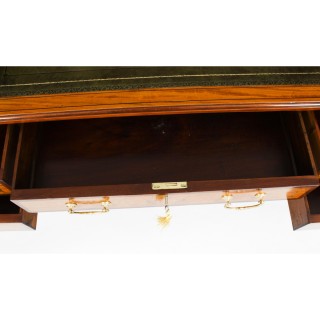 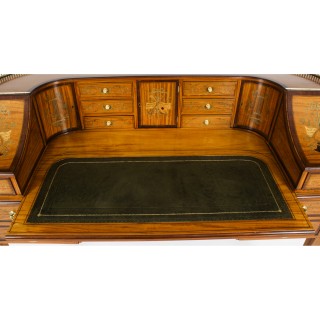 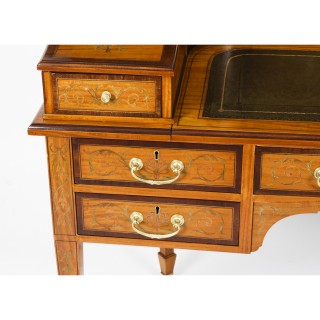 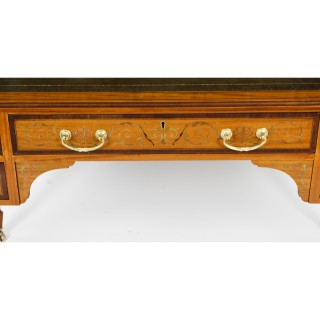 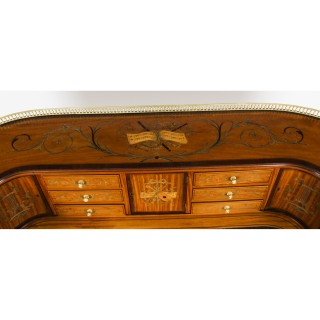 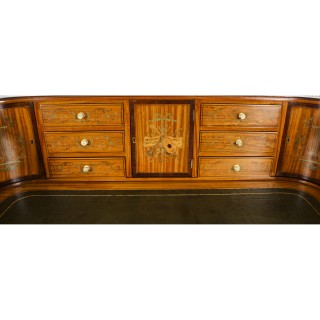 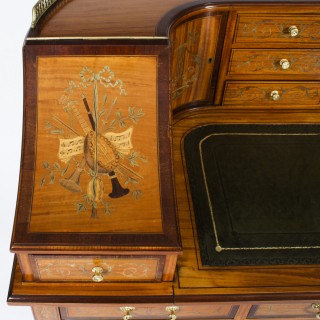 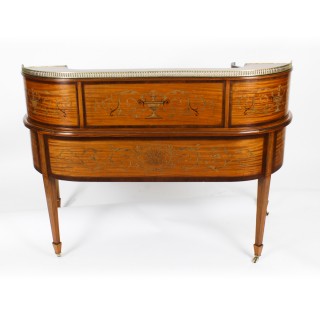 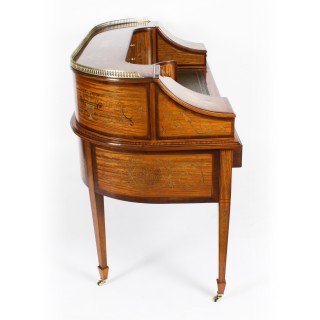 This is a beautiful antique late Victorian satinwood Carlton House Desk, by the renowned retailer and cabinet maker Druce & Co, circa 1880 in date.

This beautiful desk is made from satinwood, which has been crossbanded in tulipwood bordered with boxwood and ebony lines and and decorated to all sides and the top with an exquiste marquetry decoration of musical trophies, lyres and scrolling foliage. It is superbly finished all round so it will look amazing in the centre of your study!!

The curved superstructure with a brass gallery, having a central enclosed cupboard, flanked to either side by three small drawers, a further enclosed cupboard and a small drawer with curved hinged flap, having a pull out gold tooled leather inset writing surface. This provides ample storage for all of your personal and business papers.

It has a capacious central frieze drawer with scroll spandrels, flanked by two short drawers to either side. It is raised on square tapering legs that terminate in spade feet with brass castors.

The craftsmanship that has gone into this desk is second to none, and it will soon become the centrepiece of your furniture collection.

Druce & Co of 68 Baker Street, Portman Square, London, were established in the 1840’s and were both cabinet makers and retailers of high quality furniture. In the Marlebone Trade Directory of 1853, they described themselves as ‘Furnishers,Upholsterers and Upholders for clients of discernment’.

Carlton House Desk
is a specific antique desk form within the more general bureau à gradin form. This specific form is supposed to have been designed in 1790s for the Prince of Wales (who later became George IV) by George Hepplewhite. It is named after Carlton House, which was at the time the London residence of the Prince of Wales. This kind of desk is sometimes also known as a Carlton House writing table.

The desk is like a normal writing table but the small drawers above the surface form a “U” shape around the user instead of being merely set up in front of him as is usual in a typical bureau a gradin. Unlike other types of bureau a gradin the Carlton House desk usually offers no pigeonholes. There are usually small slopes over the two desktop drawers at the left and right ends of the “U” shape.
Drawings of this type of desk were presented by Hepplewhite in his famous design book the Cabinet Maker and Upholsterers Guide and by Thomas Sheraton in his own famous book of designs, The Cabinet Maker and Upholsterer’s Drawing Book, thus ensuring its popularity.

Alfred Charles Hobbs
(1812 – 1891) born in America, when Alfred was only three years old his farther died leaving the family destitute. Beginning at the age of ten, A. C. Hobbs worked at a variety of jobs ranging from farm help to wood carving, carriage building, tinsmithing, and harness making. While an apprentice at the Sandwich Glass Company, he learned to make doorknobs and became interested in locks. For a while he was a partner in a small firm of Jones & Hobbs, lock makers. About 1840 he became a salesman for the Day & Newell Company – one of America’s foremost lock makers. Here he earned a reputation as an expert lock picker. He found that the best way to sell his Companies locks was to pick the locks of his competitors.

In 1851 he was sent to the Great Exhibition in London where he successfully picked the famous Chubb and Bramah locks. ( “Great Lock Controversy” .)
Assisted by his newly won fame and publicity, he founded Hobbs & Co., London, in 1852.