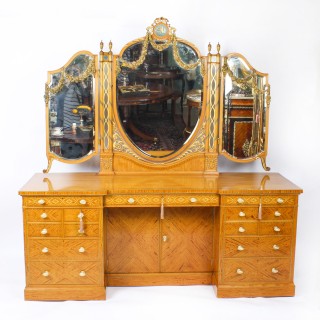 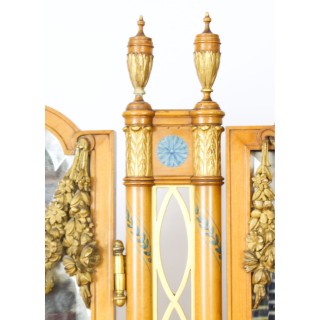 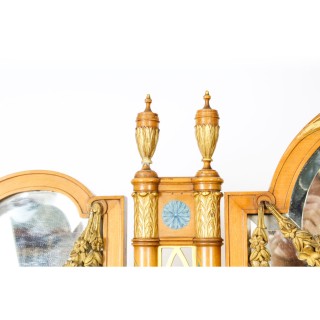 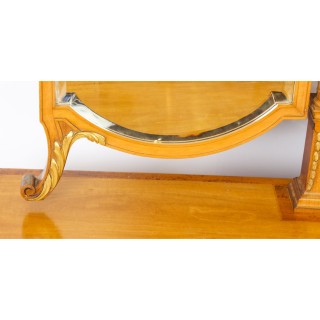 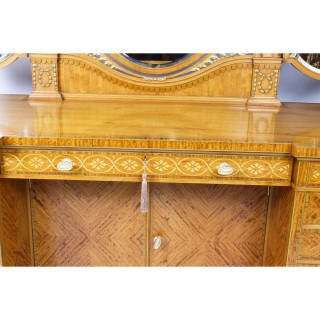 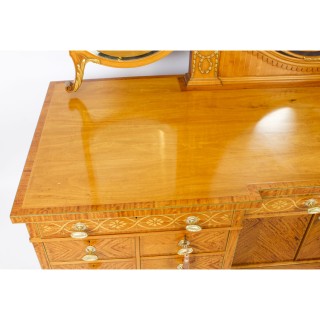 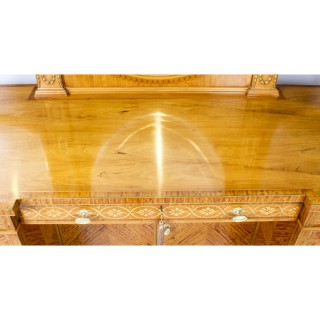 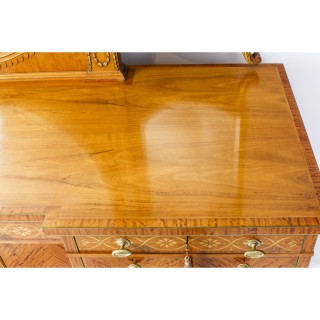 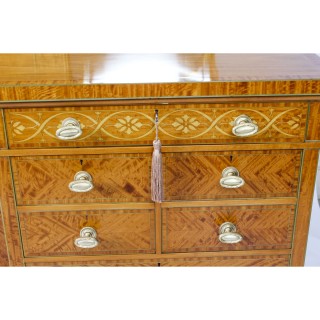 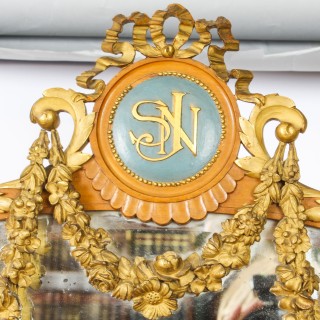 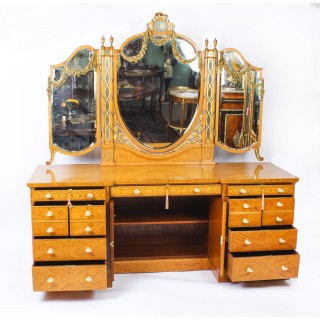 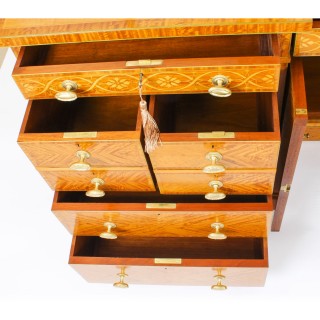 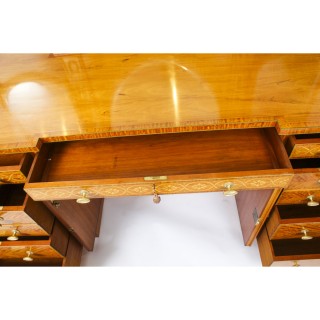 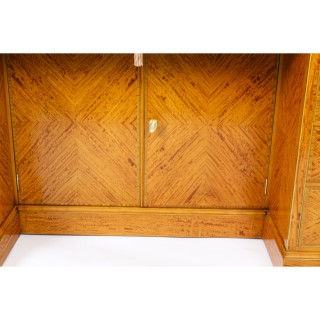 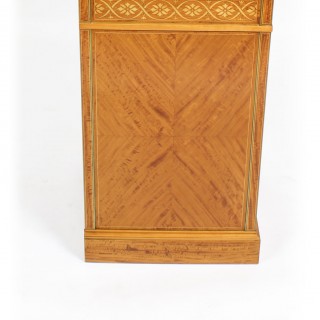 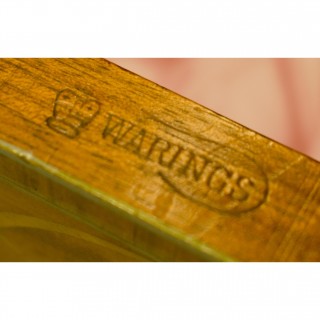 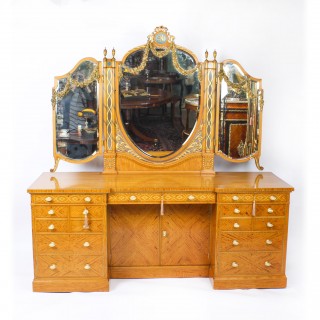 This is a magnificent antique satinwood dressing table with marquetry and parquetry inlaid decoration, the locks stamped Gillow Lancaster, the drawer stamped Warings, Circa 1880 in date.

It has an adjustable triple mirror, with gilt swagged and painted detail, bearing the monogram SJN There are three drawers in the frieze as well as six further drawers in each pedestal and a pair of cupboard doors in the centre.

There is no mistaking its superb quality and fantastic design, which alone is certain to make this set a talking point in your home and become a treasured addition to the furniture in your bedroom.
Condition:
In excellent condition having been beautifully cleaned and polished in our workshops, please see photos for confirmation.

Waring & Gillow
is a noted firm of English furniture manufacturers formed in 1897 by the merger of Gillow of Lancaster and Waring of Liverpool.

The firm of Gillow’s of Lancaster can be traced back to the luxury furniture and furnishings firm founded by Robert Gillow (1704–72) in 1730. Robert Gillow served an apprenticeship as a joiner. During the 1730s he began to exploit the lucrative West Indies trade exporting mahogany furniture and importing rum and sugar. Following his death in 1772, the business was continued by his two sons, Richard (1734–1811) and Robert (1745–93). In 1764 a London branch of Gillow’s was established at 176 Oxford Road, now Oxford Street, by Thomas Gillow and William Taylor. The firm rapidly established a reputation for supplying high-quality furniture to the richest families in the country.

During the final years of the 19th century the company ran into financial difficulty and from 1897 began a loose financial arrangement with Waring of Liverpool, an arrangement legally ratified by the establishment of Waring & Gillow in 1903. Waring’s of Liverpool was founded by John Waring, who arrived in the city from Belfast in 1835 and established a wholesale cabinet making business. He was succeeded by his son Samuel James Waring who rapidly expanded the business during the 1880s, furnishing hotels and public buildings throughout Europe. He also founded Waring-White Building Company which built the Liverpool Corn Exchange, Selfridge’s department store and the Ritz Hotel. Samuel James’s son and namesake Samuel James Waring (1860-1940) continued the family business and was elevated to the peerage as Baron Waring in 1922.

Gillow’s had established a reputation for the outfitting of luxury yachts and liners, including the royal yacht Victoria and Albert, liners Lusitania,Heliopolis and Cairo, Queen Mary (1936) and Queen Elizabeth (1940) for Cunard. During the First World War the Lancaster factory was turned over to war production, making ammunition chests for the Navy and propellers for De Havilland DH9 aircraft. They also established a large tent-manufacturing facility of 8,000 workers during WW1 on the now closed former exhibition site at White City (the former Machinery Hall). They also made gas masks and trench covers from this site.During this time it was also at the White City site that the Workers Union first got recognition after a four-day strike mainly by women. The company also manufactured ammunition belts for use with machine guns, nosebags for horses and protective clothing for use during gas attacks.

During World War II the factory produced parts for gliders and the Mosquito aircraft, while kit-bags, tents and camouflage nets were made by the upholstery department.

However, the business of the firm began to decline and the Lancaster workshops closed on 31 March 1962. In 1980 Waring and Gillow joined with the cabinet-making firm Maple & Co, to become Maple, Waring and Gillow, subsequently part of Allied Maples Group Ltd, which includes Allied Carpets.

The lustrous, fine-grained, usually figured wood is used for furniture, cabinetwork, veneers, and backs of brushes. West Indian satinwood, sometimes called yellowwood, is considered superior. It is the golden yellow, lustrous, even-grained wood found in the Florida Keys and the West Indies.