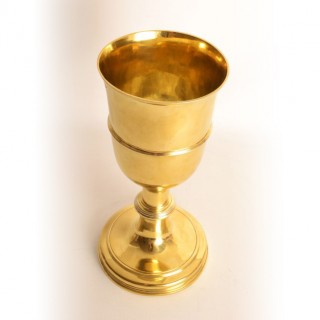 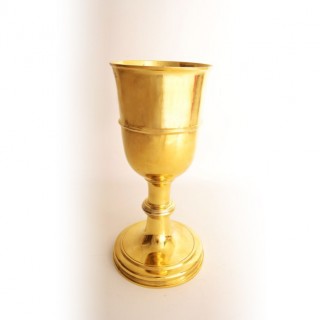 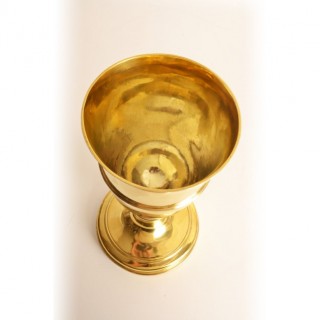 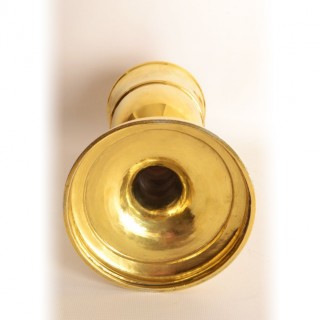 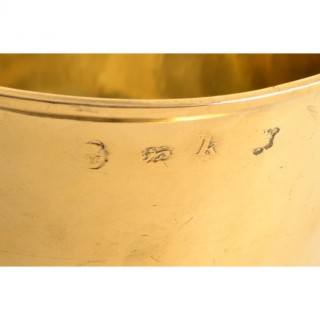 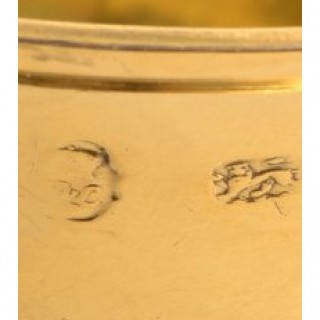 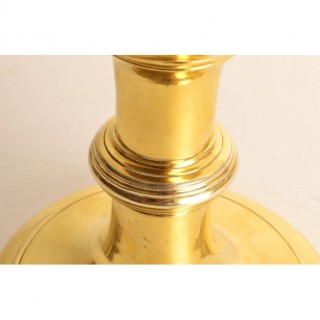 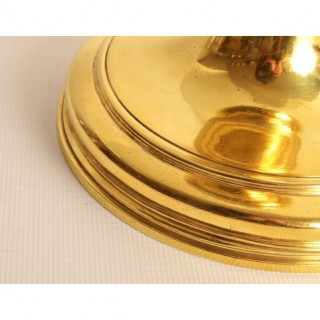 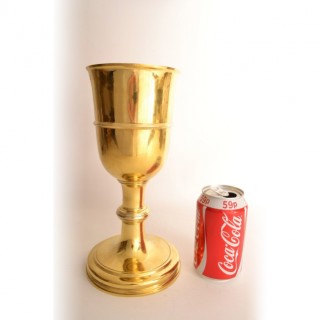 This is an exquisite antique George II English silver gilt chalice bearing hallmarks for London 1745 and the makers mark of the renowned silversmith Paul de Lamerie.

Bearing the mark P.L in script under a crown over a pellet, this mark was first entered in 1739.

From a domed foot, the tall stem with plain beaded knop, rises to the bowl which is divided by a wide band.

The restrained form illustrates that at the end of his working life, Paul de Lamerie reverted to simple designs, in this case similar to his earliest chalice for Milton Cleveden.

A truly exquisite piece, in excellent condition, that would make a fine addition to any antique silver collection.

Condition:
In excellent condition, however the P de L mark is slightly rubbed, please see photos for confirmation of condition.

Paul de Lamerie (1688 – 1751) was an English silversmith. The Victoria and Albert Museum describes him as the “greatest silversmith working in England in the 18th century”.

De Lamerie was born in Hertogenbosch in the Netherlands. He was the son of a minor French nobleman, Paul Souchay de la Merie. His Huguenot parents had left France following the Edict of Fontainebleau in 1685. His father became an officer in the army of William III of Orange and moved to London in 1689 in the Glorious Revolution, but died a pauper in 1735.

He married Louisa Juliott on 11 February 1717. They had two sons and four daughters together; three daughters survived. He died in London and was buried at St Anne’s Church, Soho.

In August 1703, De Lamerie became the apprentice of a London goldsmith of Huguenot origin, Pierre Platel. De Lamerie opened his own workshop in 1713 and was appointed goldsmith to George I in 1716. He worked in partnership with Ellis Gamble – formerly the apprentice master of William Hogarth – between 1723 and 1728. His early work is in the simple Queen Anne styles, following classical French models, but Lamerie is noted for his elaborate Rococo style from the 1730s, particularly the richly-decorated works of an unidentified craftsman, the Maynard Master.

His customers included Tsarinas Anna and Catherine, Count Aleksey Bobrinsky, Sir Robert Walpole, the Earl of Ilchester, the Earl of Thanet, Viscount Tyrconnel, the Duke of Bedford, and other members of the English upper classes. He also worked for John V of Portugal before losing favour to the Germains in Paris. Amongst his production to the Portuguese Court was a huge solid silver bath tub lost in the great 1755 Lisbon earthquake.

He served on the committees of the Goldsmiths’ Company. He served as a captain and then major in the Westminster volunteer association.

In excellent condition, however the P de L mark is slightly rubbed, please see photos for confirmation of condition.