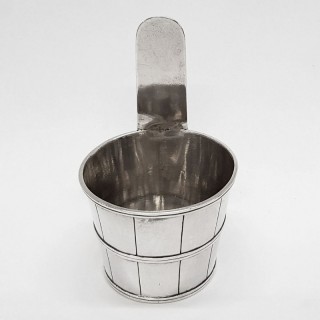 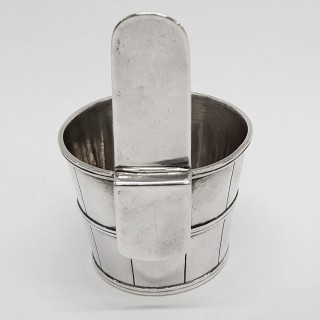 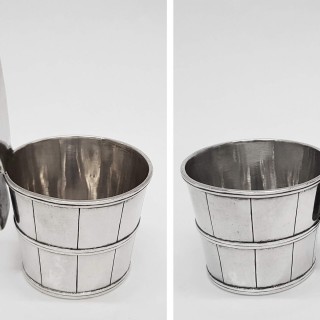 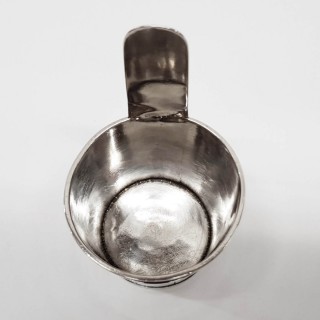 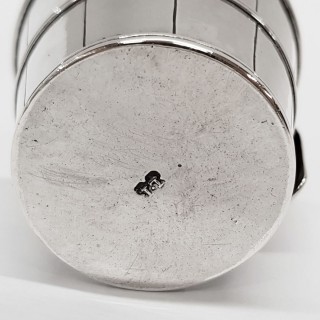 A delightful antique sterling silver cream pail or piggin in the traditional form of a milking pail or bucket with coopered decoration. It has a single raised handle with a hanging bracket to the reverse to suspend the little bowl from possibly the sugar bowl. Weight 37 grams, 1.1 troy ounces. Height 4.3 cm (7 cm to top of handle). Diameter 4.3 cm. London circa 1750. Makers mark only for Lawrence Jones.
Literature. Silver Cream Jugs & Pails. Milk or cream was not commonly taken in tea and coffee until the early eighteenth century. The earliest form of milk jug was introduced during the Queen Anne period and was shaped like a coffee pot with a hinged lid. By the 1720’s there were cream jugs without lids, usually with a baluster shaped body, sometimes of hexagonal form. By the end of the 18th century it was common practice for the cream jug to match the teapot in an integral set. Cream Pails c.1760-1820 are small silver containers with top or side handle which are useful for both sugar or cream.
LAWRENCE JONES
Lawrence Jones, apprenticed to John King 1676, free 1686. Mark entered as largeworker undated, presumably 1697 on commencement of the register. Livery 1705. Court 1724. Warden 1728.

The little creamer is in very good condition with no damage or restoration. Excellent patina. Marked underneath with makers mark only for Lawrence Jones. Slight unevenness to the base of the handle.