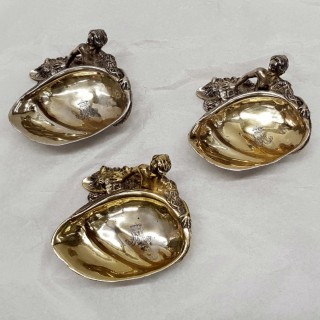 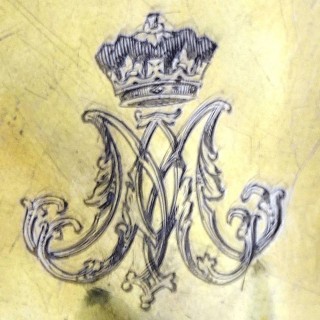 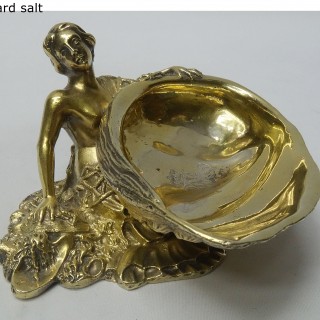 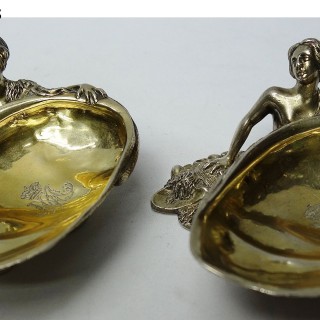 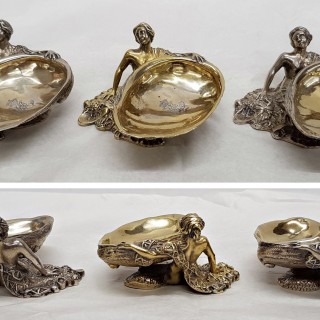 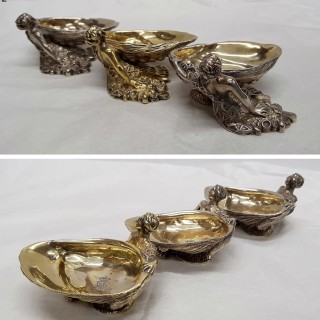 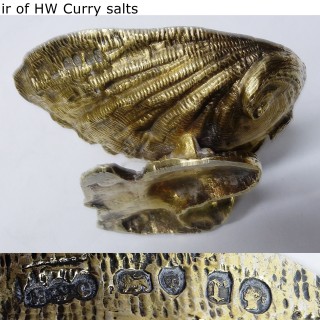 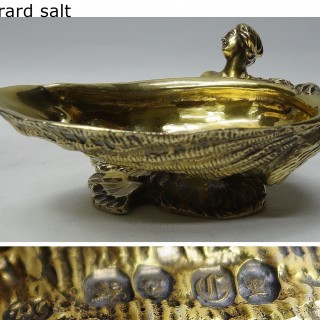 A fine quality set of three antique sterling silver salt cellars modelled as a mermaid draped in a fishing net and holding a giant sea shell. Heavy cast silver. Original gilt finish. Hand engraved inside the bowl of the salt is a stylistic monogram below a ducal coronet. Total weight 1039 grams, 33.4 troy ounces. Height 5.5 cm. Width 9.5 cm. Depth 9 cm. One is made by Robert Garrard, London 1838. The other pair, an identical copy, is by Henry William Curry, London 1872.

Biography – Robert Garrard took sole control of the firm Parker & Wakelin in 1802, with his sons Robert Garrard II, James and Sebastian succeeding him in running the company, trading as RJ & S Garrard (Robert Garrard & Brothers) until James’ retirement in 1835, when the company became R & S Garrard. The company remained in the hands of the Garrard family until the death of Sebastian.
In 1843, Queen Victoria appointed Garrard to the position of Crown Jewellers, leading to the production of numerous pieces of silverware and jewellery for the Royal Family, as well as the upkeep of the Crown Jewels.
Henry William Curry acquired the business of Augustus George Piesse in 1867. He traded in his own name HWC until c 1890 when he entered partnership with Charles Stuart Harries trading as C.S. Harris & Co; this was dissolved in 1896. William Henry Curry entered further marks as H.W.C in 1868, 1869 and 1882.

These excellent condiments are in very good condition with no damage or restoration. Stamped with a full set of clear English hallmarks on the edge of the shell. The gilt is original and medium bright, there is a small amount of wear to the inside of the bowl.