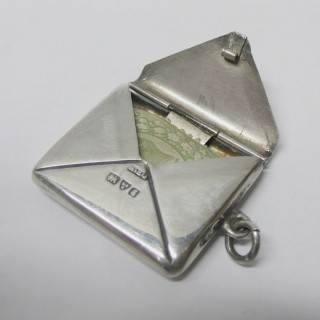 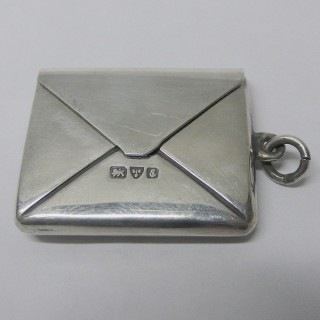 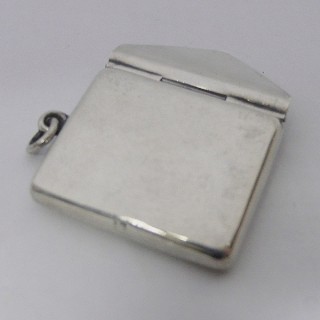 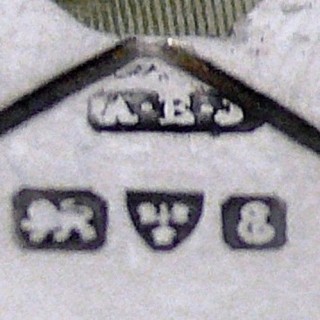 A plain style sterling silver stamp case in the form of an envelope with a hinged top. The little silver ring was to attach it to a watch chain or chatelaine. Inside there is an old stamp (used). Weight 5 grams Measures 2.5 x 2.3 cms. Stamped on the body for Chester 1905. Maker A.E Jones.

Biography – Albert Edward Jones: was born in 1878 into a family of craftsmen dating back to 1780, and died in 1954. Apprenticed to Hardman Powells and trained at the Birmingham Central School of Arts under Edward Taylor Jones gained a reputation as a developer and innovator. He worked as a Guildsman at the Birmingham Guild of Handicraft where he was influenced by the Arts and Crafts Movement and met many artists and designers. He left the family metalwork business and set up on his own in 1902. Success came quickly, the workshop attracting a talented group of artists and craftsmen inspired by the Arts and Crafts movement. In 1905 he acquired Jesson and Birkett with its trade mark of St. Dunstan hand-raising a bowl. He collaborated with Edward Taylor’s son Howson, owner of Ruskin Pottery, in mounting and using the coloured pottery as liners for some of his silverwork which at this time was all hand raised. The company produced many clock cases with French movements and a considerable amount of Ecclesiastical work. In 1958 his son Kenneth Crisp Jones (also trained at the Central School of Art Birmingham) took over the business which was later acquired by C J Vander of Sheffield. “A piece of silverwork to be really interesting must be endued with a Spirit of Art…..” A E Jones 1906

This pretty little stamp case is in good condition with no damage or restoration. With a full set of English silver hallmarks on the body.