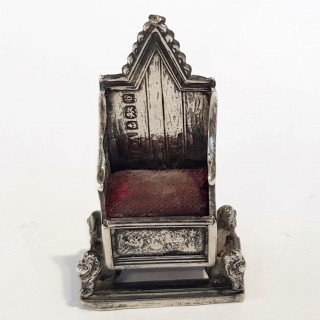 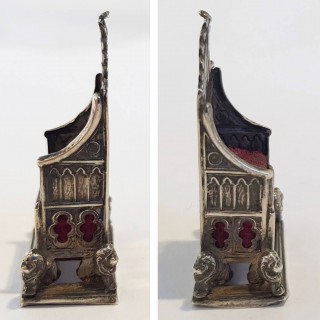 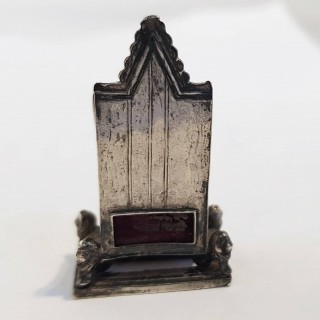 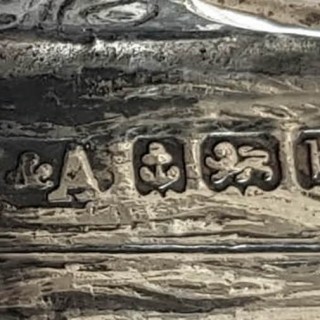 An unusual antique sterling silver pin cushion in the form of the Coronation Chair at Westminster Abbey in London. This was made in 1296 for King Edward I to enclose the famous Stone of Scone; the original is made of solid oak and stands on 4 gilt lions. Height 4 cms. Width 2.5 cms.Depth 1.25 cms. Birmingham 1901. Maker Horton & Allday.

The Coronation Chair was made for King Edward I to enclose the famous Stone of Scone, which he brought from Scotland to the Abbey in 1296, where he placed it in the care of the Abbot of Westminster. The King had a magnificent oaken chair made to contain the Stone in 1300-l, painted by Master Walter and decorated with patterns of birds, foliage and animals on a gilt ground. The figure of a king, either Edward the Confessor or Edward I, his feet resting on a lion, was painted on the back. The four gilt lions below were made in 1727 to replace the originals, which were themselves not added to the Chair until the early 16th century. The Stone was originally totally enclosed under the seat but over the centuries the wooden decoration has been torn away from the front. At coronations the Chair with the Stone stands facing the High Altar. Every monarch has been crowned in this chair since Edward II in 1308, except Edward V and Edward VIII, who were not crowned. At the joint coronation of William III and Mary II in 1689 a special chair was made for Mary, which is now in the Abbey Museum. The Chair was taken out of the Abbey when Oliver Cromwell was installed upon it as Lord Protector in Westminster Hall. It was used by Queen Victoria at the 1887 Golden Jubilee Services in the Abbey. During the Second World War the Chair was evacuated to Gloucester Cathedral and the Stone was secretly buried in the Abbey. Most of the graffiti on the back part of the Chair is the result of Westminster schoolboys and visitors carving their names in the 18th and 19th centuries. The Chair was kept in the Chapel of St Edward the Confessor for many centuries until that chapel was closed to general visitors in 1997. In February 1998 the Chair was moved out to the ambulatory and raised on a modern pedestal near the tomb of Henry V. In April 2010 it was moved to a specially-built enclosure within St Georges Chapel at the west end of the Nave for essential conservation work.

In very good condition. Some wear to the velvet.
Please note that this item is not new and will show moderate signs of wear commensurate with age. Reflections in the photograph may detract from the true representation of this item.