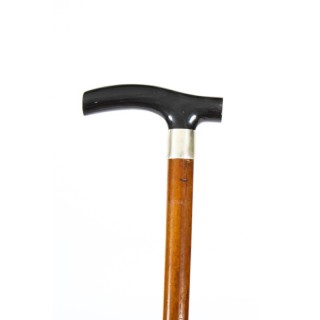 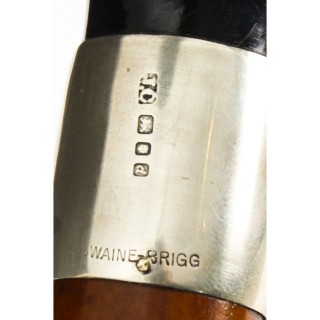 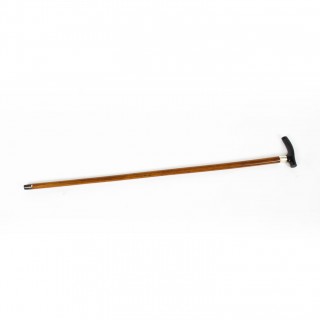 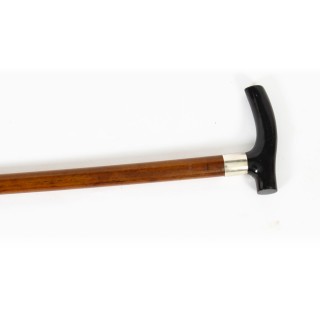 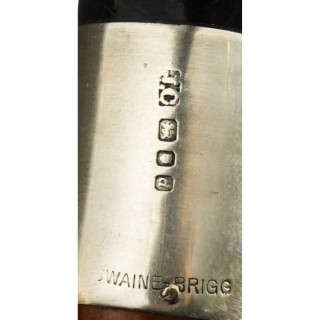 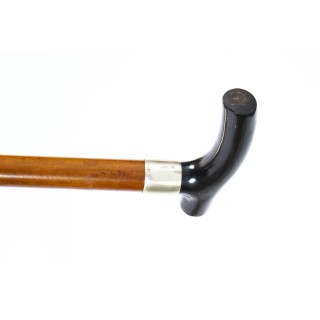 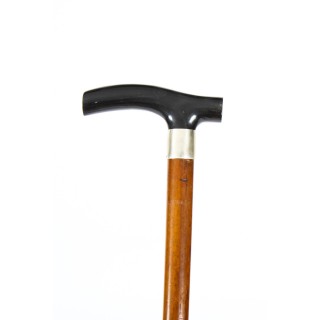 This is a beautiful antique Victorian horn handled walking stick, the silver collar bears hallmarks for the maker Swaine Adeney Brigg, London and is dated 1859.

The handle is carved in a derby shape and features an elegant a silver collar
The sturdy Malacca tapering shaft features its original brass ferrule.

It is a lovely item and as such would be appreciated by any collector of walking sticks or canes.

A Royal appointment to His Majesty King George III and to his sons, The Prince of Wales and the Dukes of York, Clarence, Kent, Cumberland and Cambridge quickly followed and Swaine Adeney’s reputation for quality and excellence was established.

The Royal appointments were renewed in the reigns of His Majesty George IV and His Majesty William IV. In the year 1835, James Swaine moved his business to larger premises at 185 Piccadilly. The business continued to flourish and in 1845 Edward Swaine took his nephew into partnership and Swaine Adeney was born.

In many ways, much remains the same today, the same artisan’s crafts are used to hand-shape the fine leather goods: tooling, stitching and engraving each piece in time-honoured tradition. The Swaine Adeney workshops in Cambridgeshire and Norfolk are one of the UK’s last studios left in the UK to craft fine leather in this way.

In 1851, Swaine Adeney decided to put its fine products on show to the world at the London Exhibition held at the newly constructed Crystal Palace. The Exhibition was the largest the world had ever seen (attracting over six million visitors to a space four times the size of St. Peter’s in Rome).

Swaine Adeney won several prize medals at the London Exhibition, prompting the company to show its fine goods at the Paris Exhibition of 1900 (at which further medals followed). Swaine Adeney’s reputation was now growing on a worldwide stage, as the finest producer of leather goods.

Thomas Brigg and Son’s was established in 1836 at No. 23 St. James’s Street a stone’s throw from Swaine Adeney Brigg’s present location. The company specialised in the manufacture of the finest umbrellas, walking sticks and hunting crops.
In the late 18th century, Royal tradesmen began displaying the Royal Arms on their premises and stationery. Queen Victoria ensured Royal Warrants gained the prestige they enjoy today. During her 64 year reign, the Queen and her family granted more than 2000 Royal Warrants, eight times as many as the Queen’s uncle, George IV.
In 1893, Thomas Brigg and Sons received its first Royal Appointment from Her Majesty Queen Victoria and became the first umbrella maker ever to be honoured with an appointment. Further Royal Appointments were also bestowed by Her Majesty Queen Victoria and by His Majesty Edward VI with the last bestowed by HRH The Prince of Wales.
During the Second World War, Brigg & Sons lost its Paris shop when France was occupied. Back home in London, help was at hand in the form of Swaine Adeney: the two firms joined forces mid-war in February 1943, to form Swaine Adeney Brigg & Sons Limited. The store became well known for the supply of its equestrian goods, which are still made to this day.