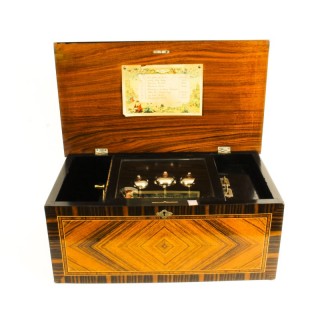 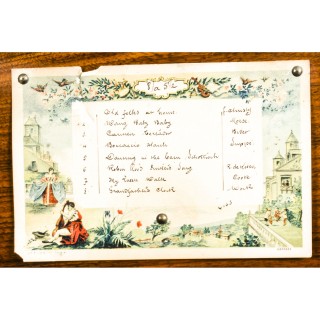 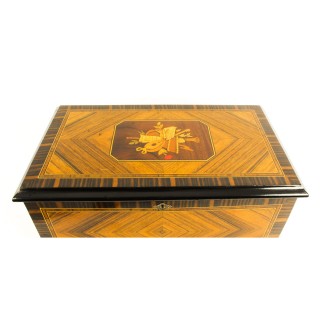 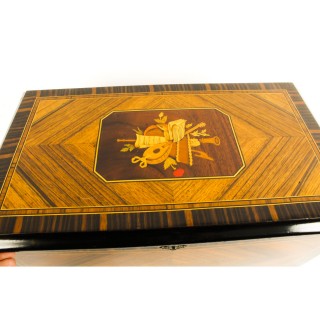 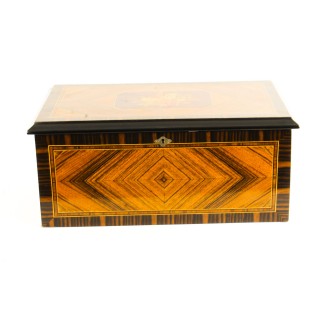 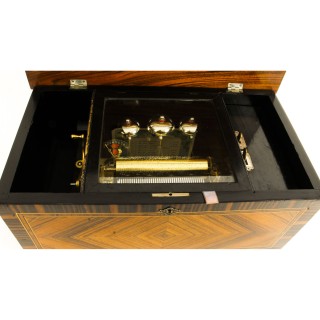 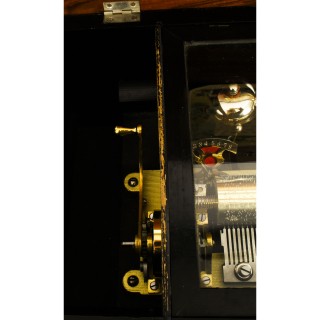 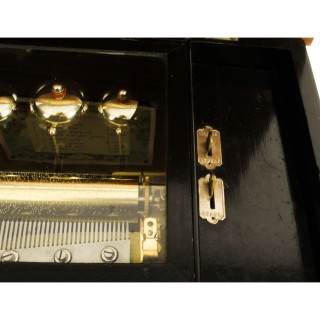 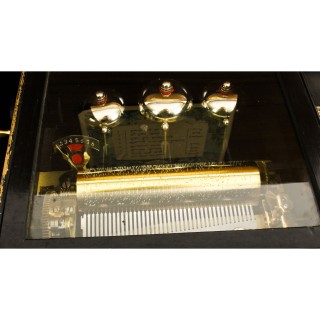 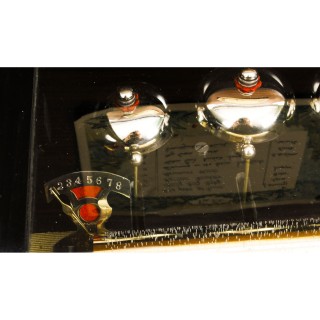 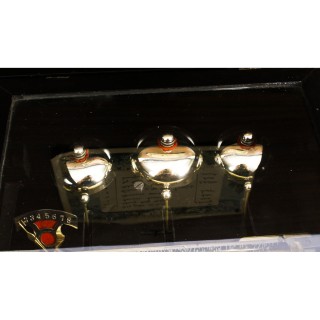 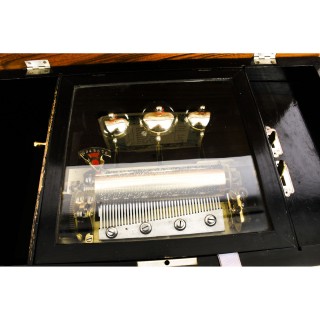 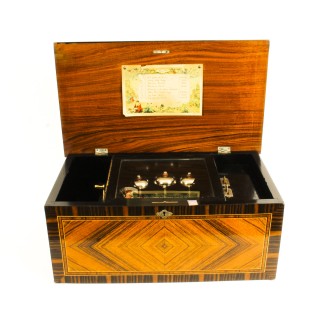 This is a superb antique Swiss music box with three bells in view and 15.4 cm cylinder, circa 1880 in date.
The highly attractive case is rectangular in shape and has been accomplished in superb coromandel, goncalo alves and tulipwood with a beautiful decorative marquetry panel of musical instruments to the centre of the lid.

The music box plays eight airs/tunes which are named on the original charming and joyful music sheet with coloured engraving which is attached to the inside of the lid. The sheet features charming classical scenes of delightful people playing instruments in a countryside landscape featuring period buildings and gardens.

This is a magnificent antique music box which will bring a truly jovial atmosphere wherever placed.

Condition:
In really excellent working condition, the movement having been beautifully cleaned and restored and the case repolished, please see photos for confirmation.

Music box
(also musical box) is a 19th/20th century automatic musical instrument that produces sounds by the use of a set of pins placed on a revolving cylinder or disc so as to pluck the tuned teeth (or lamellae) of a steel comb. They were developed from musical snuff boxes of the 18th century and called carillons à musique. Some of the more complex boxes also have a tiny drum and/or small bells, in addition to the metal comb.

For most of the 19th century, the bulk of music box production was concentrated in Switzerland, building upon a strong watchmaking tradition. The first music box factory was opened there in 1815 by Jérémie Recordon and Samuel Junod. There were also a few manufacturers in Bohemia and Germany. By the end of the 19th century, some of the European makers had opened factories in the United States.

The cylinders were normally made of metal and powered by a spring. In some of the costlier models, the cylinders could be removed to change melodies, thanks to an invention by Paillard in 1862, which was perfected by Metert of Geneva in 1879. In some exceptional models, there were four springs, to provide continuous play for up to three hours.

Coromandel wood or Calamander wood
is a valuable wood from India, Sri Lanka and South East Asia. It is of a hazel-brown color, with black stripes (or the other way about), very heavy and hard. It is also known as Macassar Ebony or variegated ebony and is closely related to genuine ebony, but is obtained from different species in the same genus; one of these is Diospyros quaesita Thwaites, from Sri Lanka. The name Calamander comes from the local sinhalese name, ‘kalu-medhiriya’, which means dark chamber; referring to the characteristic ebony black wood.

Coromandel wood has been logged to extinction over the last 2 to 3 hundred years and is no longer available for new work in any quantity. Furniture in coromandel is so expensive and so well looked after that even recycling it is an unlikely source. A substitute, Macassar Ebony, has similar characteristics and to the untrained eye is nearly the same but it lacks the depth of colour seen in genuine Coromandel.

Tulipwood
Brazilian tulipwood is a classic high-quality wood, it is very dense with a lovely figure. It is used for inlays in furniture and for small turned items. Available only in small sizes, it is rarely used in the solid for luxury furniture. Like other woods with a pronounced figure it is rather strongly subject to fashion.