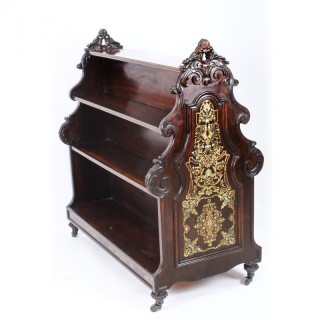 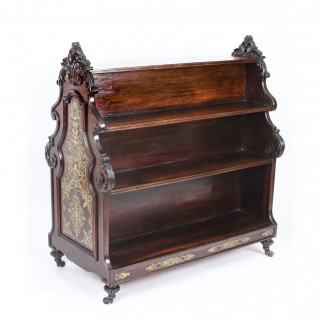 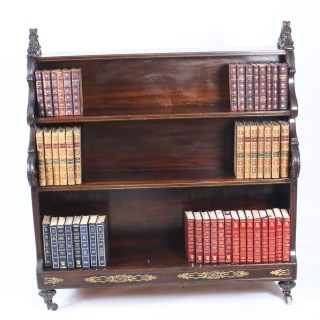 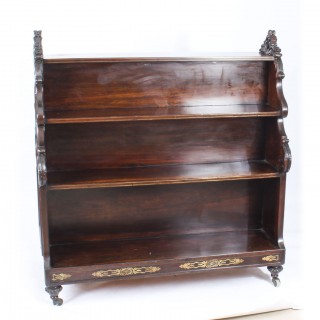 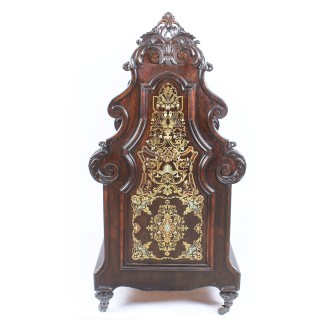 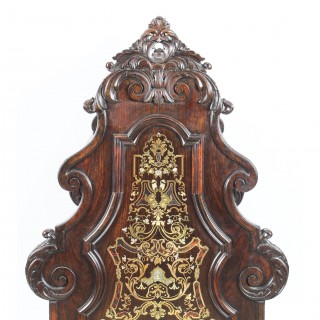 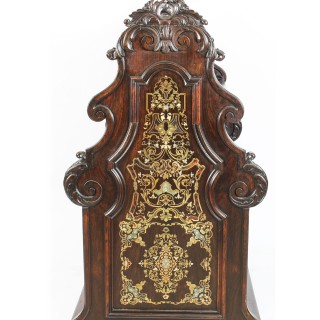 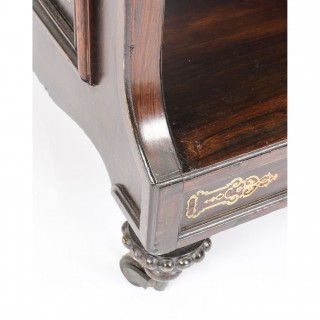 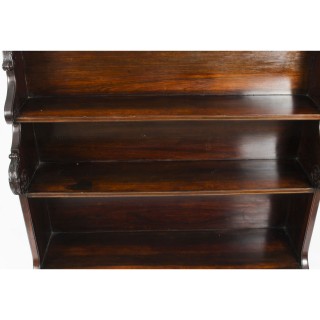 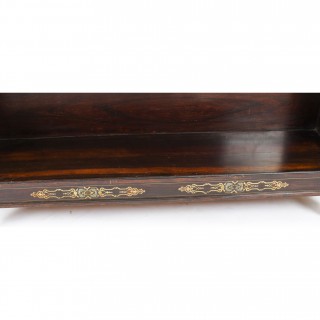 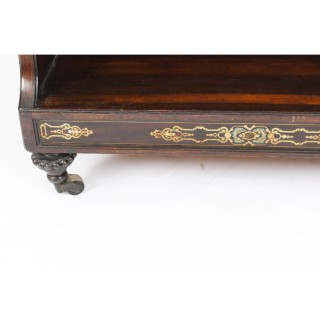 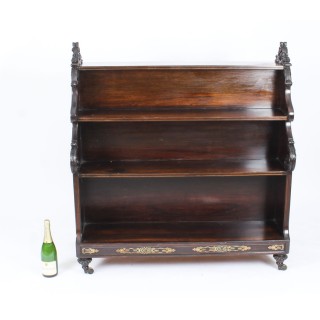 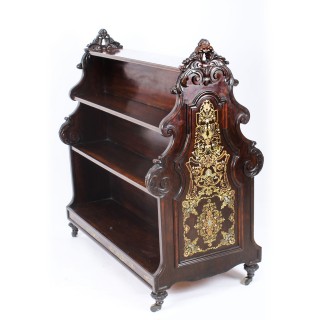 This is a beautiful antique William IV Gonçalo Alves double sided waterfall bookcase, circa 1835 in date.

This magnificent double sided bookcase has decorative arched ends that have been intricately carved with scrolling leaves and pendant flowers. The sides and frieze are superbly inlaid with brass arabesque medallions and enameeled with various colours.

It is raised on turned studded feet with inset brass castors.

A delightful item which will look amazing wherever placed.

Condition:
In excellent original condition having been beautifully cleaned and waxed in our workshops, please see photos for confirmation.

William IV – the brief reign of William IV (1830 – 1837) marked a period of transition between the Regency period (which had been an age of innovation based on revivalist styles such as ancient Egypt, and the Grecian designs) and the Victorian era.
William IV furniture is similar in style to Regency furniture with many of the designs from the Regency period being copied but often executed in a much heavier manner with chairs, tables and other items being coarser and clumsier in appearance when compared with those made during the Regency period.

Popular pieces produced during this period include tilt top dining tables and pillared extendable tables. Sofa tables and drum tables were also favoured at the time as were sideboards and card tables. Heavy brass fittings were a prominent feature such as lion’s paw feet on tables. Chairs frequently sported sabre legs to the back with stumpy bulbous turned legs to the front. The rope twist carved back was also much in favour.

This period also saw the introduction of the more exotic timbers such as rosewood and zebra wood. With the Industrial Revolution getting under way furniture making saw the increased use of mechanisation a trend set to accelerate during the Victorian period.

This short, but important transitional period eventually gave way to the romanticism of the Victorians but the furniture it produced was usually of good quality and it remains sought after and desirable today.

Gonçalo Alves is a hardwood (from the Portuguese name, Gonçalo Alves). It is sometimes referred to as tigerwood — a name that underscore the wood’s often dramatic, contrasting color scheme.

While the sapwood is very light in color, the heartwood is a sombre brown, with dark streaks that give it a unique look. The wood’s color deepens with exposure and age and even the plainer-looking wood has a natural luster.

Two species are usually listed as sources for gonçalo alves: Astronium fraxinifolium and Astronium graveolens, although other species in the genus may yield similar wood; the amount of striping that is present may vary.

In the high tropical forests of Central and South America, well-drained soils furnish nutrients for a variety of dense, durable hardwoods sought for maritime use, heavyconstruction, and furniture. The Spanish began harvesting in Latin American forests in the early 1500s to provide timber for boatbuilding and repair. By the early 1900s, however, steel ships had replaced wooden ones, and the interest in tropical forests by both Europeans and Americans shifted to appearance-grade woods for furniture.

Although history fails to provide us with a shopping list of species from either harvest period, it’s probable that the wood we know today as goncalo alves has always been sought. That’s because goncalo alves, considered one of the most beautiful of tropical woods, has a tough reputation, too. Strong and durable, it’s used for construction in its homeland and secondarily for fine furniture. Woodworkers elsewhere treasure the wood for decorative items and veneer accents.