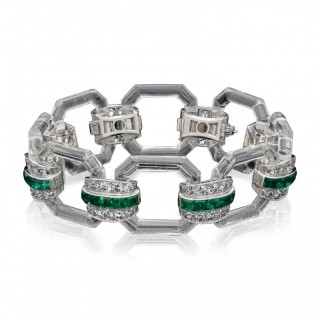 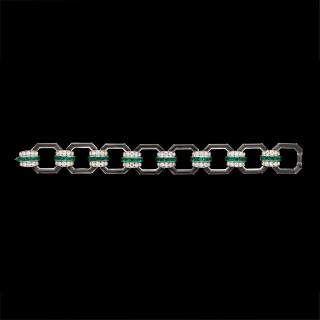 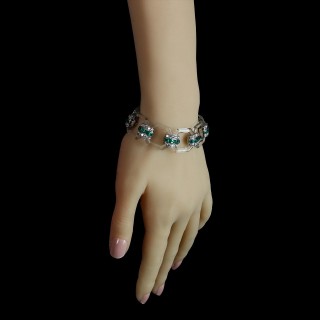 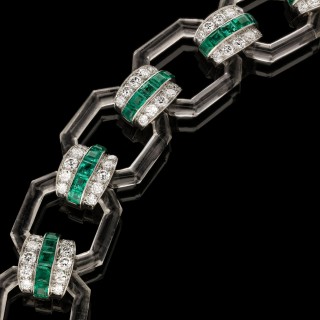 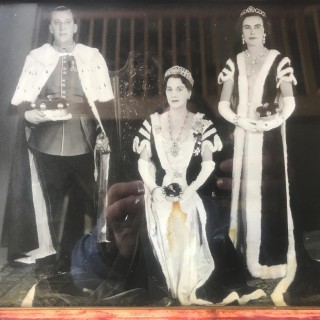 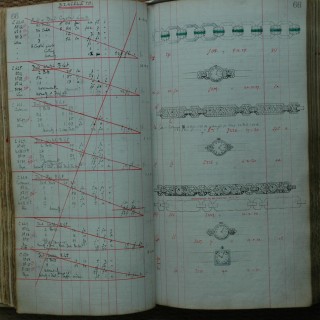 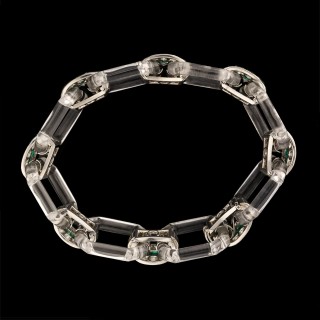 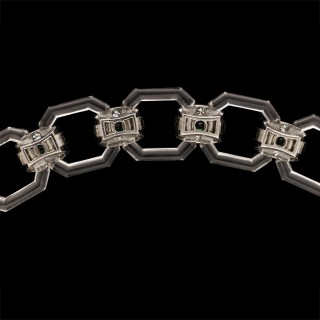 A stunning Art Deco bracelet by Hennell 1929, formed of eight open uniform octagonal links carved from colourless transparent rock crystal quartz and joined by tonneau-shaped platinum links set to the centre with a row of calibré-cut emeralds between outer rows of round diamonds, the end one forming a concealed clasp. This wonderful bracelet is quintessentially Art Deco in style and combines several themes typical of the aesthetic of jewellery from this period. The strong geometric shape of the links, the juxtaposition of just two contrasting colours, the use of rock crystal as a precious gemstone and the coloured gems calibré-cut especially for the piece are all signifiers of Art Deco jewels. The transparent rock crystal lends a light airiness to the bracelet whilst the deep saturated colour of the grass green emeralds is grounding and both are enhanced by the bright sparkle of the diamonds. Weather worn alone or stacked with others, as was the fashion in the 1930s, this bracelet will make an elegant and stylish addition to any jewellery collection.

Accompanied by an image of the original design sketch from the Hennell archives dated 9th December 1929.

The renowned firm of Hennell was founded by silversmith David Hennell (1712 – 1785) in 1736. He had been apprenticed to Edward Wood in 1728 and gained his freedom in 1735, setting up in business the following year in Gutter Lane near St. Pauls in the City of London. One of the oldest silversmithing and jewellery manufacturers in London, the business grew steadily over the coming years.
David’s son Robert joined his father in 1763, the business moved to nearby Foster Lane and they registered a joint mark. They created fashionable silverware of the highest quality for wealthy clients and received many remarkable commissions including that from Admiral Lord Nelson in 1799 for a silver tea service to be used on board HMS Victory. European Royalty frequented the business, Queen Victoria was a customer as were King George V and his wife Queen Mary.
During the 19th century the firm began branching into jewellery manufacturing, largely at the instigation of Robert’s son (also called Robert) who had joined the business. However, it was under the artistic direction of chief designer Charles Bruno during the 1920s and 30s that Hennell’s jewellery gained the recognition it deserved and in particular his Art Deco designs heralded a golden age for the firm in terms of jewellery.
The archive books contain wonderfully detailed design drawings detailing the stones and metal needed for each piece along with client names and dates all accompanied by careful costings. The names in these books attest to the fact that the rich and famous both at home and abroad appreciated the style and quality of Hennell’s work.
The business remained a family affair until the 1970s when it was sold, but their wonderful silverware and jewels stand as testament to one of London’s earliest silversmithing and jewellery manufacturing firms.