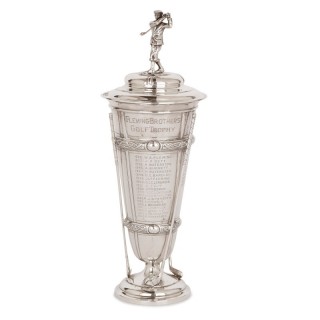 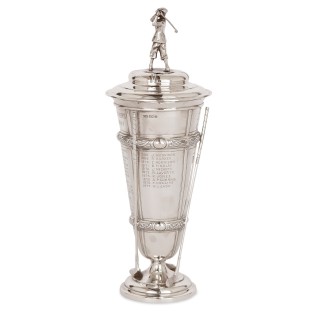 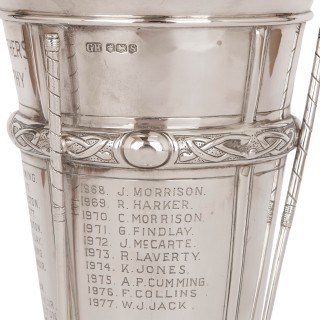 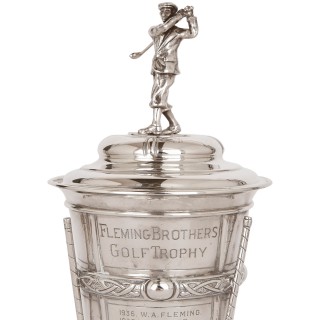 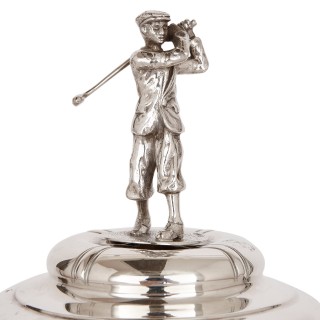 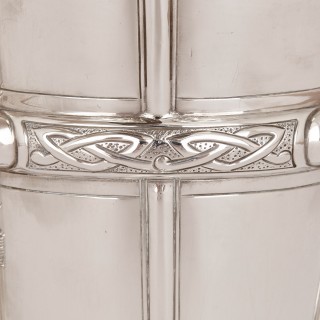 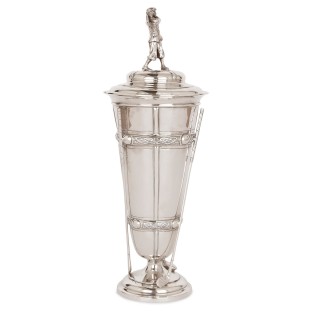 This silver cup is a wonderful piece of sporting memorabilia. The cup was presented to the winner of an annual golf tournament, which took place between 1936-1977.

The cup is shaped like a vase, with a tall, tapered body, which stands on a splayed foot, with a circular base. Four tall, silver golf clubs stand on this foot, their shafts leaning against the cup body. This body is decorated with two bands, which are embossed with circular medallions and continuous, interlaced patterns. The space between these bands has been carefully hammered with the names of those who won the golf award — from ‘W. A. Fleming’ in 1936 to ‘W. J. Jack’ in 1977. On the upper part of the cup, an inscription reads, ‘Fleming Brothers Golf Trophy’. The cup has been fitted with a shaped lid, which is topped by a finial, cast as a man playing golf, in full swing.

‘GH’ is stamped onto the cup body, accompanied by the mark of the crown, lion passant and an ‘S’. These indicate that the piece was crafted in Sheffield by George Howson. Howson was a silversmith at Harrison Brothers & Howson, the company having been originally founded in the early 19th Century. The company had showrooms in London, where their silver items were keenly viewed and purchased by the upper and middle classes. Antique Harrison Brothers & Howson silver is now considered highly collectable, and this piece will also appeal to sport and golf enthusiasts.