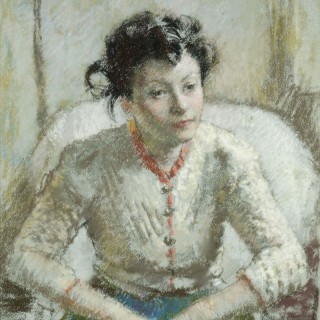 Arthur Ralph Middleton Todd, RA, RWS, NEAC (1891-1966)
Marietta
Signed; signed and inscribed with title and the artist’s address on a label on the backboard
Pastel
49 by 31 cm.

Provenance:
Purchased from the Royal Academy exhibition in 1944 by Mr I R D Byfield.

Middleton Todd was born at Helston, near Newlyn, Cornwall, the son of the painter Ralph Todd. He studied under his father and Stanhope Forbes before going to London to attend the Central School and Slade School under Henry Tonks, 1920-21. During the First World War he served as in the Art Service Corps as a driver. He taught at Leicester School of Art from 1936 and later at Royal Academy Schools and the City and Guilds School, Kennington. A noted portrait painter, especially in pastel, works by him are in many public collections including the Royal Academy, Tate Gallery, Victoria & Albert Museum and Manchester City Art Gallery.