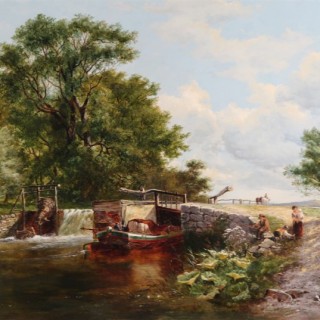 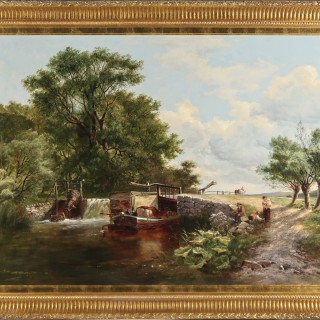 At the Lock on the river Ouse

AT THE LOCK ON THE RIVER OUSE

Edwin Boddington was a London landscape painter and only son of the artist Henry John Boddington. He was born in the Islington district of London on 14th October 1836, under the name of Williams. He grew up in London and after his marriage in 1856, lived for some time in Pimlico. Over the next thirty-six years he gave various addresses in London, Buckinghamshire and Bedford. It is said that his character is quite different from his father. His work disappeared from the major exhibiting scene about 1870, although his paintings remained known on the fine art market. Later in life he was frequently in financial difficulties, but only capitalized on his talent when really hard pressed – painting a picture in order to settle a bill for £5. In 1905 when he was 69, Edwin inherited over £1,000 from his mother, Clarissa Boddington-Williams, but a date for his own death has not been established. It is possible that he may have emigrated to Australia to join his two sons and a daughter all of whom moved there.
Edwin was a pupil of his father but his work does not always have the same quality, in his later efforts. This particular example is on of his finest and almost certainly painted with his father’s assistance in painting some of the foliage and rocks. He produced so many paintings of the Thames that he was sometimes known as “ Thames Boddington”. Edwin was 24 when he exhibited at the British Institution in 1860, A Study from Nature; Betchworth Park was noted as a “cheerful interpretation of a summer day, with its fragrant herbage and dropping sunbeams…” This description could easily apply to H.J. Boddington who exhibited exactly the same title with the Society of British Artists in the same year. The two men probably sketched the same scene together. After the death of H.J. Boddington it is known that Edwin finished some of his remaining canvases. Edwin was not always too anxious to be identified with his own paintings particularly in later years. Work signed with the surname only, often elegantly in red is thought to have been produced in order to exploit the better commercial value of the older man. Edwin is known to have signed himself as ‘E. Boddington Junior’.
He exhibited 106 works in London, including the Royal Academy and the Royal Society of British artists. Views on the Thames were his favoured subject and he developed a very personal and recognizable style.

At the Lock on the river Ouse