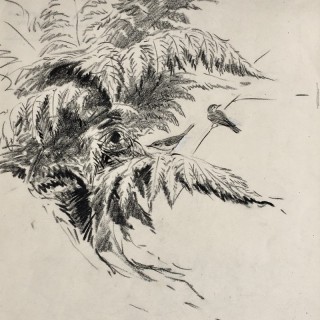 Bears studio stamp on the reverse, pencil
Unframed, in conservation mount only

She is probably best known for her work as an illustrator. Perhaps her most famous illustrations were her collaboration with Enid Blyton for whom she was to illustrate 35 books, most notably for all the Famous Five books. She illustrated and wrote her own books, her first Happy Rabbit was accepted by Macmillan in 1945 and was followed by many more including a book of poetry and from the 1950s she also wrote and illustrated many wildlife books including: Wild Encounters (1957) and No Badgers in My Wood (with Phil Drabble, 1979). Duff Hart-Davis wrote Wildings – The Secret Garden of Eileen Soper in 1991 which is extensively illustrated with her delightful drawings and watercolours of the wildlife in her garden.