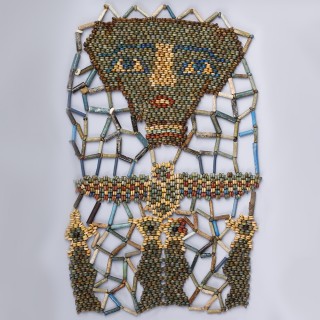 A fine Egyptian mummy mask made of small faience beads, restrung in their original arrangement. Green, turquoise blue, red and cream tones have been used to render in a highly stylised manner a human face with a neutral expression. The large trapezoid eyes, long thin eyebrows, broad nose and small mouth are arranged in a perfectly symmetrical manner. The mask is enriched by a tripartite panel under the chin of the mask, which shows a beaded composition forming a winged scarab, rendered in multi-coloured faience beads. Under the beaded scarab are the Four Sons of Horus, Imsety, Duamutef, Hapi, Qebehsenuef. It is very rare to have this enlarged group rather than just the face. Elongated faience beads frame the entire composition. Such mask would have been placed over the face of the deceased at their burial, in a similar manner to the better-known cartonnage mummy masks, mostly for decorative or protective purposes.