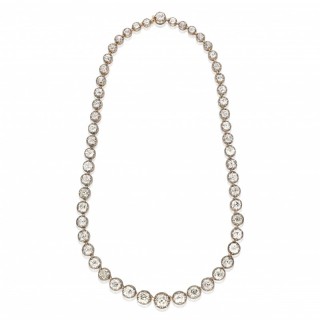 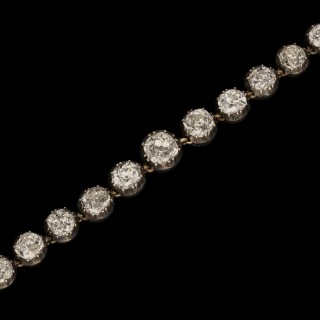 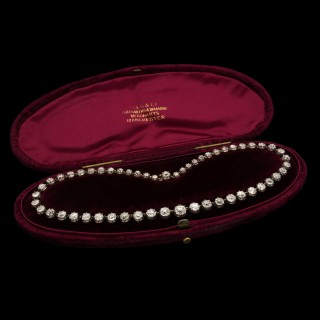 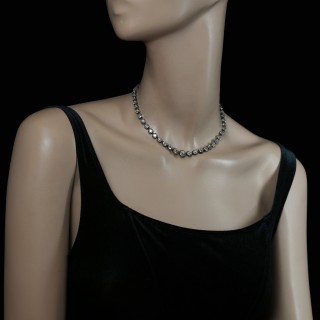 A beautiful Victorian rivière diamond necklace c.1880, set with fifty four old European brilliant and old mine cut diamonds in silver cut down collets backed with gold, the graduated diamonds estimated to weigh a combined total of approximately 23cts, to a concealed diamond set clasp. This necklace is beautifully articulated and feels wonderfully silky and fluid. The diamonds are bright and lively and have been well graduated in a continual tapering from front to back.
The rivière necklace was an extremely popular design in the 18th and 19th centuries and was made from both diamonds and coloured stones, in both uniform and graduated rows. The name translates literally as ‘river’ which perfectly alludes to the way these rows of stones would ripple around the base of the throat when worn. They were a favourite with Royalty and courtiers both in Europe and further afield and were often worn in multiples to emphasise wealth and status.
This necklace is a lovely example of its kind and even hides a little secret. Behind the centre stone is hidden a small hinged loop that can fold down and enable a pendant to be suspended from it. A lovely extra feature that increases the versatility of the piece and offers a way to change its appearance and to make it uniquely yours.