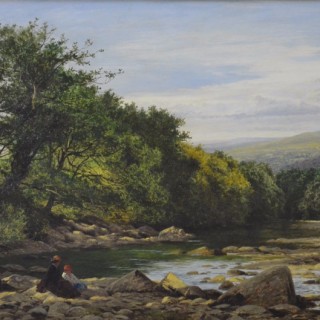 Benjamin Williams Leader - On the Llugwy - oil on panel

Signed and dated 1865; signed and inscribed with title on the reverse
Oil on panel
Framed

Leader was born in Worcester were he studied at the Worcester School of Design before going on to the Royal Academy Schools in London. Much of his subject matter was taken from the area around his native Worcestershire or nearby Wales. In 1863 his work The Churchyard at Bettwys-y-Coed was purchased by the Prime Minister, William Gladstone. He became one of Britain’s most prominent and successful landscape painters and a frequent exhibitor at the Royal Academy and elsewhere. He is represented in many public collections.

Benjamin Williams Leader - On the Llugwy - oil on panel