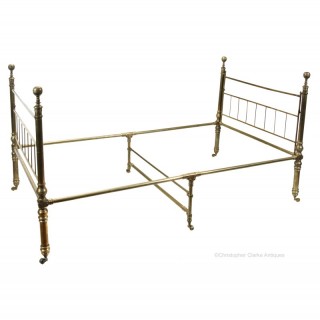 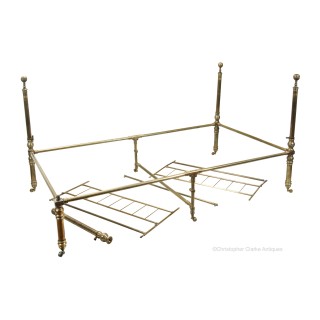 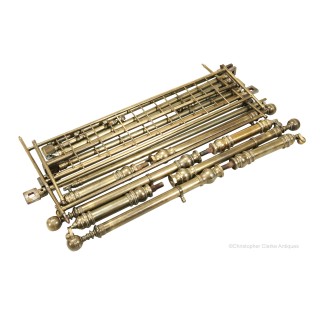 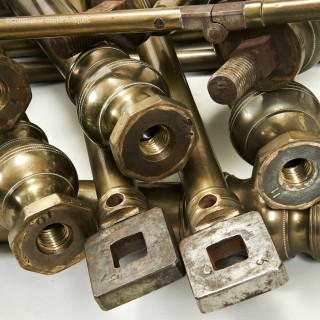 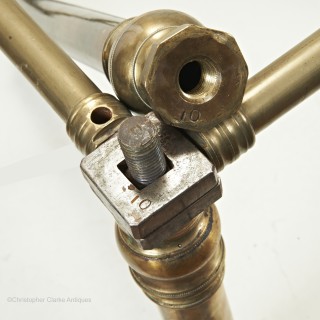 A brass and iron portable single bed that breaks down into 20 pieces for ease of travel.

The bed would have originally had a painted pine packing case and a sacking sheet to support a straw or hair mattress. It is probable that both theses would have had a stencil or label stating J.T. Thompson Patentee Of The New Military Bed 116 Long Acre London. The design of the bed is very similar to a Thompson bed in the National Army Museum collection.

The two side rails are hinged to a leg to their middle to reduce in size by half. When extended to their full length, they are united with two stretcher bars to the middle. These are concave shaped to their ends to fit against the round legs. Each end has a lug that drops into a collar on the leg. The four legs, which have a thick bolt to the top, are then fitted through the square iron section fitted to the ends of the side rails. The bottom of the leg’s bolts have a square section which fit into the square aperture of the side rail’s iron sections. This prevents them from turning.

With each leg in place, a cross rail, again with a square iron section with aperture to each end, is fitted over the thick brass bolt to the top of each leg. The posts are then screwed onto the leg bolts sandwiching the side and end rails to hold the bed frame in place. The ball finials can then be screwed to the tops of the four posts. The posts are fitted with collars to hold the brass head and foot frame which also have lugs to locate them to the end rails. Acorn finials are used to fix the frames to the collars but it is interesting that each board has one finial that screws in place and one with a simple lug. These end frames are hinged to fold, so reducing their size. The majority of the parts are numbered or marked for their position, with all parts that fit together having the same mark. These are I0, II, I2 and a fourth mark which looks to be a G or possibly a b or p.

There are some minor differences between this bed and that held by the National Army Museum: theirs has a curved end rail and a single central stretcher. Thompson’s design was made over a number of years and so it is not surprising that there might be small differences between the two. An advert by Thompson in 1811 noted ‘ The bed since its first invention has been lately so much improved as to be reduced in size and weight above one half’. Thompson noted that his bed weighed only 56lbs with bedding complete. This bed is comparable at 43lbs without bedding.

Thompson had travelled with the army during the Peninsular War in order to perfect his design. His selling points were that the bed was lightweight and, being made of brass plated onto iron, would not harbour vermin. After Waterloo, he called it the Patent Wellington Bed although whether he supplied the Duke is not known. A number of 19th century portable bed makers advertised that their beds were unique and the best whereas most were very similar to each other in design. Thompson was a leader in his field and this bed is very good quality with a simple but strong design. We have not replaced the sacking sheet because the buyer may wish to have a box made to support a mattress.

Not many of Thompson beds come onto the market, and although not marked, this is a good example likely to have been made at 116 Long Acre. Early to mid 19th Century.