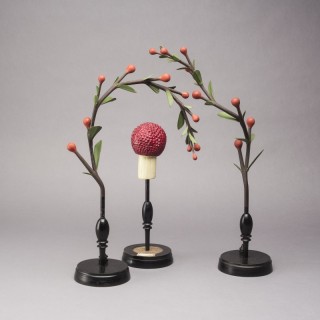 Hand painted papier maché, paper and wood on turned wood stands.
Claviceps purpurea (ergot, a fungi which grows on the ears of wheat and other cereals) by Brendel. The remaining models yet to be identified.

As detailed by the University of Aberdeen Zoology Museum, “In the late 19th Century Robert Brendel and his son Reinhold produced beautiful and accurate models of enlarged flowers at Breslau and Berlin. Usually the models were made of papier maché, but with other materials added to give detail and texture: wood, cotton, rattan, pulp cane, glass beads, feathers and gelatine.”
Reinhold Brendel was honoured with many awards at World Fairs:

These didactic models of plants were in great demand in the 19th century due to their scientific accuracy. They were bought by Universities worldwide as aids to teaching, many from Alberto Dall’Eco who was a dealer in scientific and teaching tools and materials; active in Florence in the late 19th/early 20th centuries. The Department of Biology at the University of Florence still hold a collection of these specimens bought from Dall’Eco