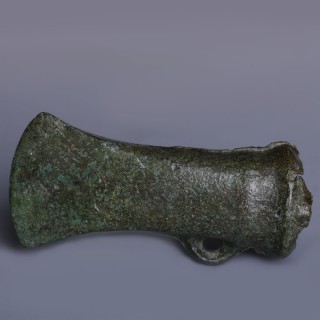 A well-preserved British Late Bronze Age socketed axe head, featuring a corded band around the socket and a small loop at its base. The casting seam is visible above and below where the two halves have been joined. The surface is covered in a beautiful olive green patination. Axe heads have been vastly recovered from all stages of the British Bronze Age, however socketed and looped axe heads, such as this example, have been usually dated to the last part of the British Bronze Age.

Condition: Good condition, surface is covered in a green patination.