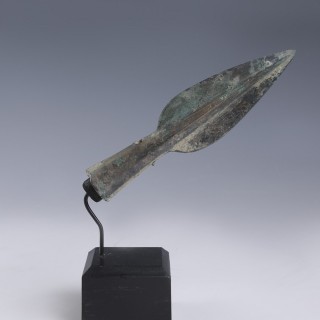 An European cast bronze leaf-shaped spearhead, the mid-rib of which features a raised central ridge. There are two piercings below for attachment pins mid-way either side. This is a good example of late Bronze Age workmanship with an aesthetically shaped blade and beautifully golden-green patinated surface.

Although some Bronze Age spearheads were intended for practical use as weapons in war and hunting, archaeologists believe that some were designed as religious offerings. Spearheads of all types were attached into long handles (normally of ash or pinewood), with those functioning as votive offerings usually thrown into bodies of water. Indeed, several Bronze Age spearheads have been uncovered in the River Thames. Size gives the best indication as to a spearhead’s intended use: smaller spearheads tended to be projectile weapons, whereas larger ones were thrusting weapons. The largest of spearheads were probably the ceremonial ones, on account of their impractical size, with decoration and barbs serving as further indications of their ritual purpose.

Very fine condition with areas of golden patinated bronze, overlain with light accretions and darker areas of green patina. Mounted on a custom made stand.